Madeleine Albright: “I have come a long way, so I must be frank” 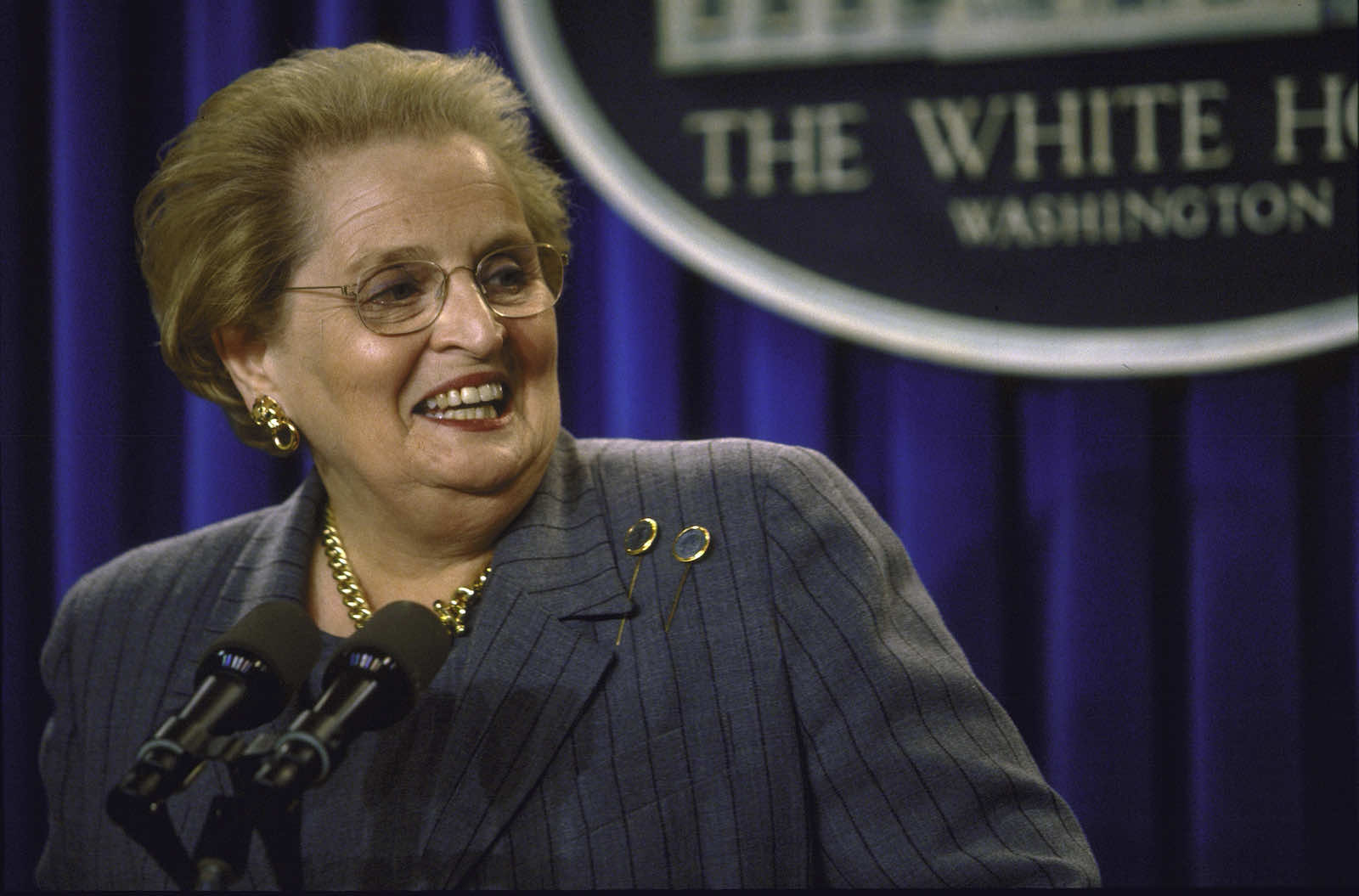 The essence of diplomacy is communication. Madeleine Albright excelled at delivering a message. And as a woman of firsts, she encountered the all-too-typical obstacles of a male-dominated field, suffering a focus on her dress and appearance.

So Albright took the challenge and flipped it, subtly using her choice of jewellery to reinforce what she wanted to say.

“We shared a love of jewellery,” Julie Bishop said. “She often used her jewellery to make a diplomatic statement.”

Albright passed away on Wednesday, aged 84, having steered American diplomacy in the 1990s, with the wars in former Yugoslavia and sanctions against Saddam Hussein’s Iraq among the events dominating her tenure (later apologising for having remarked “the price is worth it” over the punishing cost of sanctions).

Putin remarked that he always knew the mood of the meeting by glancing at the shoulder of Albright.

While the two didn’t overlap during their time in office, Bishop met with Albright for advice and has often quoted Albright’s reflection that “there’s a special place in hell for women who don’t help each other”.

They also shared stories about Albright’s delight in finding a way to stand out in a world so often featuring men in boring suits and ties.

In Albright’s 2010 book, Read My Pins: Stories from a Diplomat’s Jewel Box, she told of meeting Iraqi officials during her time as US permanent representative to the United Nations. Saddam’s regime had singled Albright out for special criticism, branding her an “unmatched clamour-maker” and “unparalleled serpent”.

“I couldn’t resist”, Albright recalled. She arrived at the meeting sporting a small pin fashioned as a snake on her jacket, “the reptile coiled around a branch, a tiny diamond hanging from its mouth.” It was the beginning of what was to become her statement.

Bishop took inspiration. “I at times wore a brooch that would hopefully send a message,” she told me this morning following news of Albright’s passing. On a visit to Israel and the Palestinian Territories, for instance, Bishop wore jewellery shaped as a peace dove.

“I didn’t do it to the extent of Madeleine Albright. I wore brooches and people could read what they liked into it.”

And they did, in local politics as well as diplomacy. Nor was it just jewellery. A photo contrasting Bishop’s bright red high heels with the cluster of plain leather shoes worn by reporters on the day she resigned in 2018 came to be seen as a statement of women’s empowerment, such that Bishop subsequently donated the shoes to the Museum of Australian Democracy.

Many tributes are flowing for Albright given her achievements in world affairs, made all the more extraordinary given her background as a refugee. As a child in Czechoslovakia, her family first fled Nazi invaders and later a communist takeover before settling in the United States, concealing even from her their Jewish heritage.

Bishop, for her part, described Albright as fearless and courageous, crediting her with an influence shared by the women who followed to serve as America’s top diplomat, Condoleezza Rice and Hillary Clinton. Bishop said each were “very supportive” of her as foreign minister.

Bishop said Albright had spoken to her on the phone as recently as last year, planning to meet as part of a former foreign ministers’ forum that Albright hosted. But Covid restrictions interrupted plans.

Bishop tells of a meeting between Russia’s then prime minister Vladimir Putin and US President Bill Clinton, where Putin remarked that he always knew the mood of the meeting by glancing at the shoulder of Albright. One time, after the Russians had been caught eavesdropping on the State Department, Albright sent her protest by wearing a giant bug pin. But plain-talking also marked her approach. Traversing the globe on shuttle diplomacy, she would cut off the small talk to declare “I have come a long way, so I must be frank”.

One telling passage casts an interesting light on the idea of Russia and China moving toward deep alignment – what Prime Minister Scott Morrison has termed an “arc of autocracy”. Of a 1999 meeting with the man who would soon become Russian president, Albright wrote:

On the question of Russia’s basic political orientation ­– and his – Putin said bluntly, ‘Sure, I like Chinese food, it’s fun to use chopsticks, and I’ve been doing judo for a long time, but this is just exotic stuff. It’s not our mentality, which is European. Russia has to be firmly part of the West.’