The making of Prime Minister Suga

Abe Shinzo’s “Mr Fix-It” has the top job. Will he make his own mark in a country famed for its revolving door of PMs? 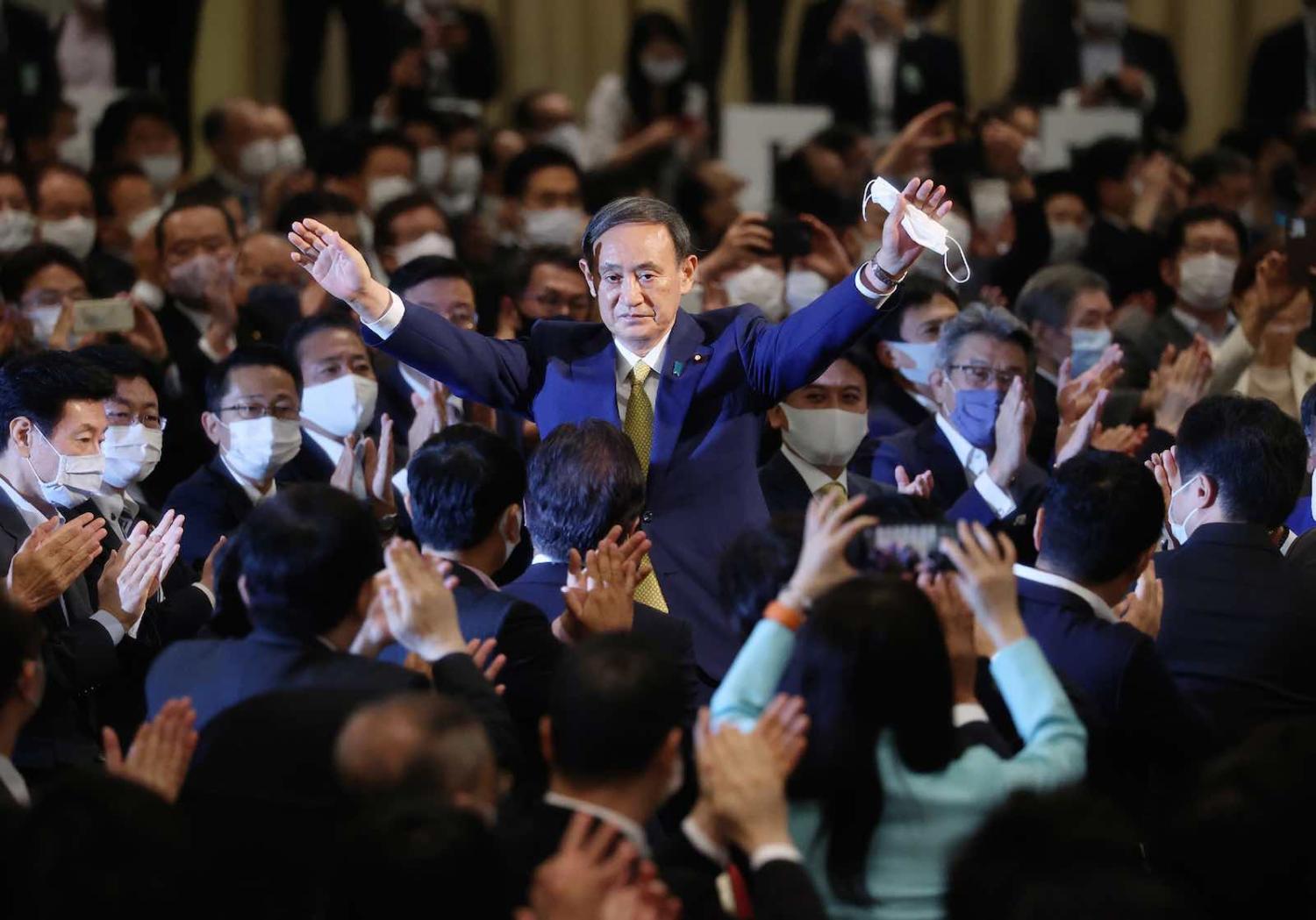 Suga Yoshihide’s moment in Japanese politics arrived with the premature resignation last month of Abe Shinzo. Suga was considered the indispensable architect of the Abe administration, controlling Japan’s political nerve centre as Chief Cabinet Secretary from 2012. On Monday this week, he was elected president of the ruling Liberal Democratic Party. Suga is scheduled to be officially appointed as prime minister in an extraordinary Diet session on 16 September.

As worthy a journey of this strawberry farm kid is on its own, the real test for Suga will be to emerge from Abe’s towering political shadow. Making it to the highest office, navigating the dense factional politics, dominated by powerful political dynasties and bluebloods is noteworthy, but only the beginning.

The key question is whether Suga is up for the top job in a country famed for its revolving-door prime ministers. Resurrecting the economy while fighting the Covid-19 pandemic with a potential snap election around the corner is daunting enough. Add to this the structural challenges posed by Japan’s demographic dilemma, adversely impacting productivity and stressing social security, along with high government debt. The task is even more formidable considering the need to defend Japanese sovereignty, secure strategic interests amid increasing Sino-US contestation and a fluid regional power balance, all the while defending a fragmented liberal order.

Japan needs resolute leadership at this inflection point. Suga would certainly aspire for more than just be a caretaker prime minister until the end of LDP president’s term in September 2021.

Politically, Suga’s mind will be dominated by the thought of consolidating his position within the factional mosaic of the LDP, garnering support from the junior coalition partner Komeito and keeping the opposition parties from gaining electoral ground. Speculation is intensifying about a snap election as the Lower House term is set to end in December 2021. Political posturing in underway with the fractured opposition now merged, with Edano Yukio, a former chief cabinet secretary under the previous Democratic Party of Japan, weaving policy alternatives.

Suga was a potent force behind the political stability of Abe’s tenure. He held a firm grip on crisis management and steered the rise of the prime ministerial executive. He was the “iron wall” battling Japanese media on tough questions relating to governance and political corruption.

In the contest for the top job, Suga, despite being an independent himself, managed to garner support from five of the seven key LDP factions. He was not Abe’s first choice as his successor, as Abe preferred the party policy chief and former foreign minister Kishida Fumio. But Kishida’s weak position in the race vis-à-vis Abe’s rival and former defence minister Ishiba Shigeru created political space for Suga.

Economically, Japan is already reeling under the adverse impacts of US-China trade war and reduced exports following Covid-19 shutdowns. Pre-pandemic, the economy was struggling, given the pressure exerted by increase in consumption tax in 2019. Cabinet Office data suggests that the economy shrank 27.8% in April-June compared to the previous quarter, as private consumption and exports suffered a greater downturn than during the Global Financial Crisis.

The urgent need is to bring the pandemic under control and normalise economic activity. Suga is likely to build on the “Abenomics” agenda by employing monetary easing and fiscal policy including stimulus packages. Advancing digitisation, consolidating the small-to-medium enterprises sector, and rebuilding hard-hit industries such as tourism will be the priority.

On the global stage, Suga will seek to lead on trade liberalisation by concluding the Regional Comprehensive Economic Partnership. He will want to make use of the free trade deals with the European Union and the newly signed agreement with the UK, along with the Comprehensive and Progressive Agreement for Trans-Pacific Partnership, to steer economic growth. Additionally, building safe, secure and resilient supply chains and partial decoupling with the “China plus one” model will be accorded importance.

In the months ahead, Suga is likely to invest in intensifying the national debate on amending the postwar constitution.

On the security front, Suga has had the opportunity to develop deft understanding about defence and security matters. As Chief Cabinet Secretary, he was part of the core four ministers meeting at the National Security Council, alongside the Prime Minister, Defence and Foreign ministers.

Unilateral Chinese attempts to change the status quo in the East China Sea through calculated grey zone tactics and fragile strategic stability in the Korean peninsula are obvious challenges. Japan is currently revisiting its National Security Strategy, and this policy recalibration has renewed the conversation about a counter-strike capability, or what is referred as “enemy-base strike”.

Japan has in recent years pushed the envelope from passive/negative pacifism to active/positive pacifism. In the months ahead, Suga is likely to invest in intensifying the national debate on amending the postwar constitution.

On the foreign policy front, he certainly will be tested while balancing interests in the US-China-Japan triangle. As Beijing challenges international norms and structures, US-Japan alliance will continue to be the key pillar of Tokyo’s foreign and security policy. Suga’s official visit to the US in 2019 gave him the opportunity to discuss critical issues of denuclearisation of North Korea and realignment of US troops in Japan with Pentagon and State Department.

Alliance management will be tested as the two countries negotiate Host Nation Support in the coming months. Additionally, greater coordination on China policy is needed to manage mutual risks and opportunities.

Suga must also attend to the neighbourhood weighed down by history and nationalism. Repairing ties with Seoul, resolving the abduction issue with Pyongyang and concluding a peace treaty with Moscow – it is certainly a challenging to-do list. He will have an opportunity to address tensions during the scheduled China-Japan-Korea trilateral in November.

As a maritime state, Japan will be a flag bearer of Free and Open Indo-Pacific and securing the global maritime commons. This will demand concerted efforts by like-minded countries within strategic frameworks such as the Quad. Given the geopolitical context, Japan’s leadership as a middle power must be further consolidated by championing multilateralism.

Suga’s political acumen and experience as the “fix-it man” for Japan’s longest-serving prime minister should not be underestimated. Japan may not immediately witness a marked policy departure.

Should a snap election eventuate, Suga’s challenge will be to consolidate political capital and manage electoral victory in order to steer Japan through the challenges of the post-Covid world. Tokyo cannot afford a leadership deficit at this juncture, which would adversely impinge on important policy matters.

Closing the book on Asia

The National Library of Australia is curtailing its Southeast Asia collection. The move is not in the national interest.
Rodger Shanahan 21 May 2019 15:30

The US hasn’t got much to show a year after pulling out of the nuclear deal, but Iran’s patience is also running out.
Merriden Varrall, Frances Kitt 24 Mar 2017 12:01

China is terrified of what could happen to its central goal of CCP legitimacy in the case of ‘imperial overreach’.