Moscow may hope to simply wait out the protesters. But the region has a history of unrest. 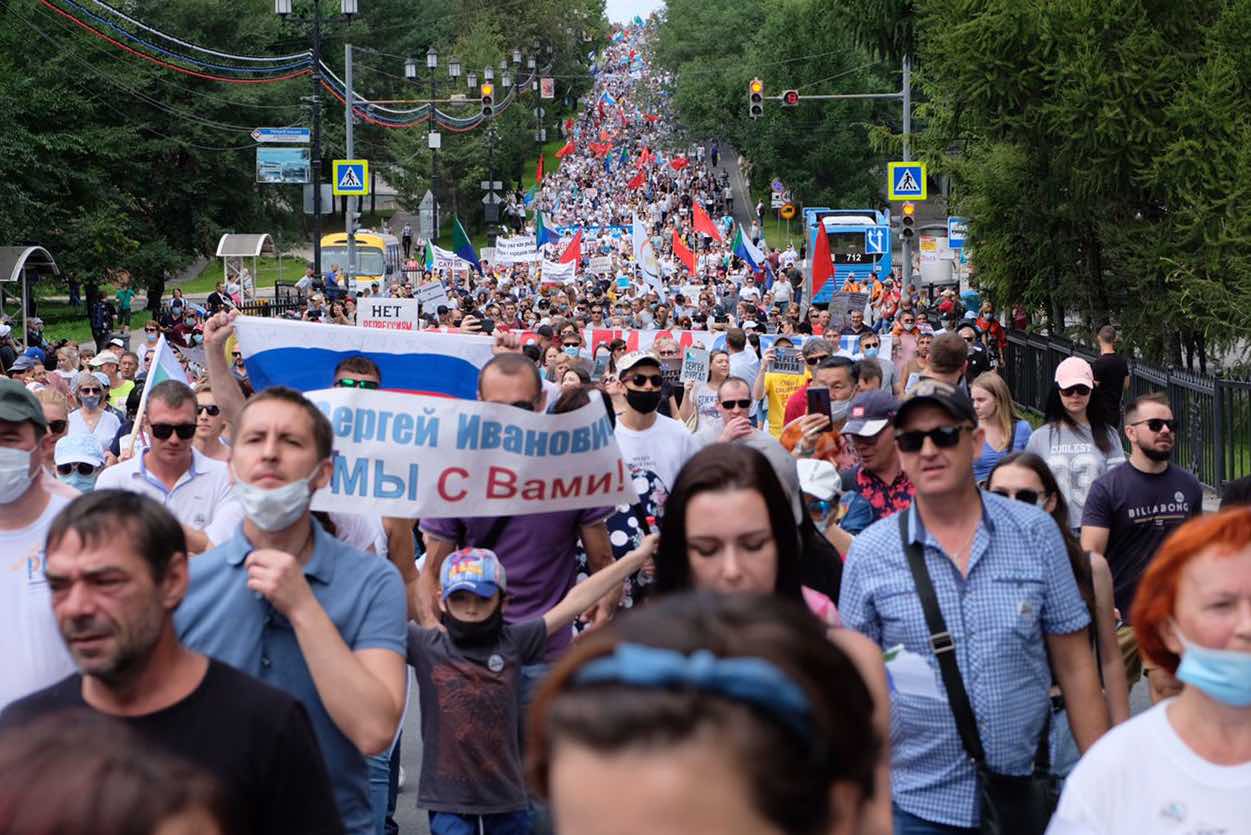 An unsanctioned rally against the arrest of Khabarovsk territory governor Sergei Furgal. The protests have been held in the region since 11 July (Dmitry Morgulis/TASS via Getty Images)
Published 15 Sep 2020 14:30   0 Comments       Follow @nikola_mikovic

Rallies in Russia’s Far Eastern city of Khabarovsk have been overshadowed by the protests in Belarus, as well as the alleged poisoning of opposition figure Alexei Navalny. Although anti-Kremlin protesters in the city of 600,000 still hold weekly demonstrations, demanding Russian authorities return former governor Sergei Furgal to the Khabarovsk region for a “fair trial” by jury, their voices can hardly be heard. In the modern media, drawn-out topics quickly fall out of the mainstream.

Furgal was arrested on 9 July and taken to Moscow, where he faces charges in connection with several killings that happened in the mid-2000s. Ever since, his supporters in Khabarovsk have staged demonstrations drawing tens of thousands of locals to the streets. So far, the protesters have not acted violently, nor have security forces attempt to quell the rallies.

However, given that the authorities refuse to release Furgal, or at least allow him a trial in his hometown, the point of the protests has become questionable. There is, reportedly, a “significant decline” in the number of protesters, and authorities seem to be implementing the same strategy used by the French President Emmanuel Macron in enduring the so-called “Yellow Vest demonstrations”. Wait it out, in other words. The protests in France have gradually died down, given none of the protesters’ demands have been fulfilled. It is possible that Russian leaders are hoping that rallies in Khabarovsk go the same way, aware that any concessions to the protesters will be interpreted as a sign of weakness.

Still, the protests in the Russian Far East continue. Furgal remains in Moscow and will likely stay there at least until 9 December, with investigators having filed a motion to extend his detention. According to investigators, he has been charged with organising the murders of businessmen in 2004 and 2005.

The Kremlin may have a hard time explaining why he was not arrested earlier. Furgal, now 50, had been elected to the State Duma as a lawmaker three times, and in September 2018 won a popular vote to become a Khabarovsk Region governor representing the nationalist Liberal Democratic Party of Russia (LDPR). It would be an extraordinary failing for the Russian judiciary and prosecution if the authorities were not aware of his alleged crimes for all these years.

Of course, much broader political issues could be behind this case. There has been invariable speculation that the charges against Furgal were fabricated in a bid to re-establish control over the region by United Russia, the party of President Vladimir Putin. Perhaps in an effort to allay this concern – or not to appear too obvious – it is worth noting that the Kremlin appointed another LDPR member, Mikhail Degtyarev, as an Acting Governor of Khabarovsk Krai, rather than some of the local leaders of United Russia.

The LDPR has provided a nominal opposition to the Kremlin for almost two decades, while effectively backing every major initiative by Putin. The party recently said it was grateful to Putin for the fact that Khabarovsk will be preserved as the LDPR stronghold, adding it will “fight until the end for the honourable name of Furgal”. Members of the LDPR have reportedly claimed that conflicts between Furgal and elites in Moscow over the company Amurstal constitute a factor in Furgal’s arrest. Amurstal is the largest steel producer in the Russian Far East and the largest manufacturer in the Khabarovsk region.

Any uncontrollable events in the Russian Far East could potentially weaken the central government, and the Russian Federation in general.

Degtyarev has promised to continue implementing Furgal’s policies but that pledge has not halted the protests. Indeed, besides the protesters’ demands to try Furgal in Khabarovsk, there have also been calls to remove Degtyarev, as well as the central government and President Vladimir Putin. The protesters also reportedly supported mass demonstrations in Belarus and wished good health to Alexei Navalny. It is worth remembering that Navalny enthusiastically welcomed the protests, declaring “We are with you, Khabarovsk”.

Another reason Khabarovsk residents are said to be in the streets was Moscow’s decision to move the headquarters of the Far Eastern Federal District from their city to Vladivostok. Anti-Kremlin protests seem to have regionalist and separatist tendencies. Regionalism in Russia’s Far East is not is not ethnically limited but is mostly driven by economic reasons. The Russian Far East is a federal district stretching from Lake Baikal in eastern Siberia to the Pacific Ocean, with an area of 6.2 million square kilometers, or a third of Russia. The region is rich in natural resources: oil and gas, coal, gold and other metals, fresh water, forests, fish and arable land.

Any uncontrollable events in the Russian Far East could potentially weaken the central government, and the Russian Federation in general. Old fears persist in Russia that China allegedly aims to eventually take over the Far East, and given that some Indian scholars claim that the country can provide a solution to the Russian Far East’s demographic problem, apart from being a partner in investing in energy and other projects in the region, it is no wonder that Russian officials take any threats of separatism in the region seriously.

Show Comments
Previous Article
The making of Prime Minister Suga
Next Article
Bangladesh: Fight the power or shut up?