The tactics that have allowed the Modi government to enforce unpopular new laws may not work this time. 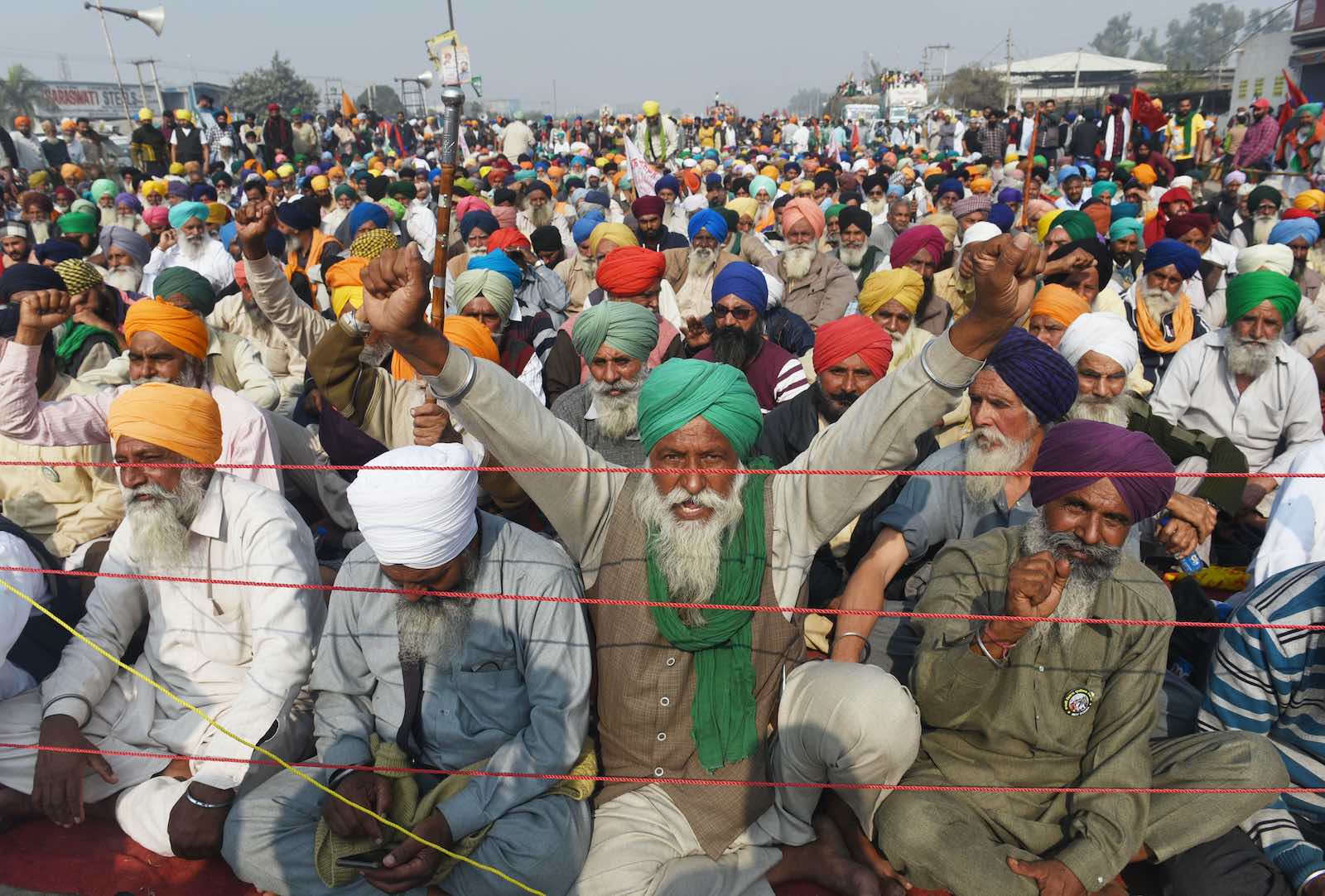 In one of the coldest winters in recent memory, and in the midst of a global pandemic, farmers from Punjab and Haryana, in their thousands, have laid siege to the Indian capital, New Delhi.

Braving cold winds, water cannons, baton charges, tear gas, barbed wire and the heavy-handed might of the Indian state, more than 300,000 farmers have marched on foot and in convoys of tractors to talk to the federal government.

At issue is a series of agricultural laws that will see the deregulation of crop pricing, particularly the removal of the so-called MCP, or minimum crop price. The government argues the new laws are a necessary reform which will give farmers more autonomy over their produce. The farmers say it will leave them at the mercy of big corporations. For months now, farmers in Punjab have been holding demonstrations, but it was only when they decided to march on Delhi that the federal government took any notice.

It’s a familiar template for the government of Prime Minister Narendra Modi. Ram laws through parliament with limited scrutiny, and enforce them with the heavy hand of the state. Demonetisation, the GST, the dilution of Article 370, the Citizenship Amendment Act and now three bills that would change the way agriculture works in India.

Farmers make a rather sizable political constituency that cannot be divided on caste or religious lines or be branded “anti-national terrorists”, nor are they susceptible to threats.

The bills in question were passed into law after a voicevote in parliament, despite repeated requests from the opposition to extend the debate to the next day or refer it to a special committee.

Cue public outrage, protests and a clumsy, harsh security response from the state. But this time, the Modi government, which has an unassailable majority in parliament, may have bitten off more than it can chew.

More than 60% of India’s population depends on agriculture, and farmers make a rather sizable political constituency. This is a constituency that cannot be divided on caste or religious lines. They can’t be branded “anti-national terrorists”, nor are they susceptible to threats from the various arms of the state, including the Central Bureau of Investigation or the Income Tax department. What’s more, the farmers of Punjab have successfully withstood the onslaught of Modi's BJP and instead elected local representatives who have now walked away from Modi’s government.

So what’s at stake here? More than 80% of India’s farmers own less than two hectares of land. Activists believe that pushing them into accepting a regime with the promise of increased private investment could open the door for unrestrained corporate power over small and medium farmers. Corporate entities will also be entitled to set prices for produce, something which would mean the death knell for many smaller holdings. To be fair, growing debt, poor harvests, drought and lack of government help have led to an explosion of farmer suicides across the country. And there is no arguing against the need to reform the sector. But handing it over to a growing corporate oligarchy may not be the way.

And yet it appears this is another of the Modi government’s prominent features. As columnist Harish Damodaran puts it so eloquently, it’s a shift from “entrepreneurial capitalism” to “conglomerate capitalism”. He points out:

Across many sectors today – telecom, airlines, steel, cement, aluminium, synthetic fibres, polymers, paints, cars, trucks, two-wheelers, tractors, tyres, consumer electronics and electricals, toiletries, tea and biscuits – there are two, at most three, players commanding more than 50% market share. What’s more, some groups have market leadership that straddle multiple industries … Clearly, this is a new phase of capitalism in India where large corporate “national champions” and a “strong” state are rewriting the old rules of the game.

Agriculture appears to be next in line. It’s also in keeping with the Modi government’s new inward-looking philosophy, clearly articulated by its foreign minister Subrahmanyam Jaishanker. As David Brewster recently observed, this has far-reaching implications, including for relations with Australia, “where economic relations have long been recognised as the weakest link”.

The Modi government may have silenced many of its critics, jailed dissidents and activists, used parliament to pass questionable laws, and subverted institutions. But it appears, for now at least, the nation’s food producers may have managed to stop the juggernaut in its tracks.