Ambition now looks like arrogance as New Delhi’s mishandling of the Covid-19 pandemic has resulted in disaster. 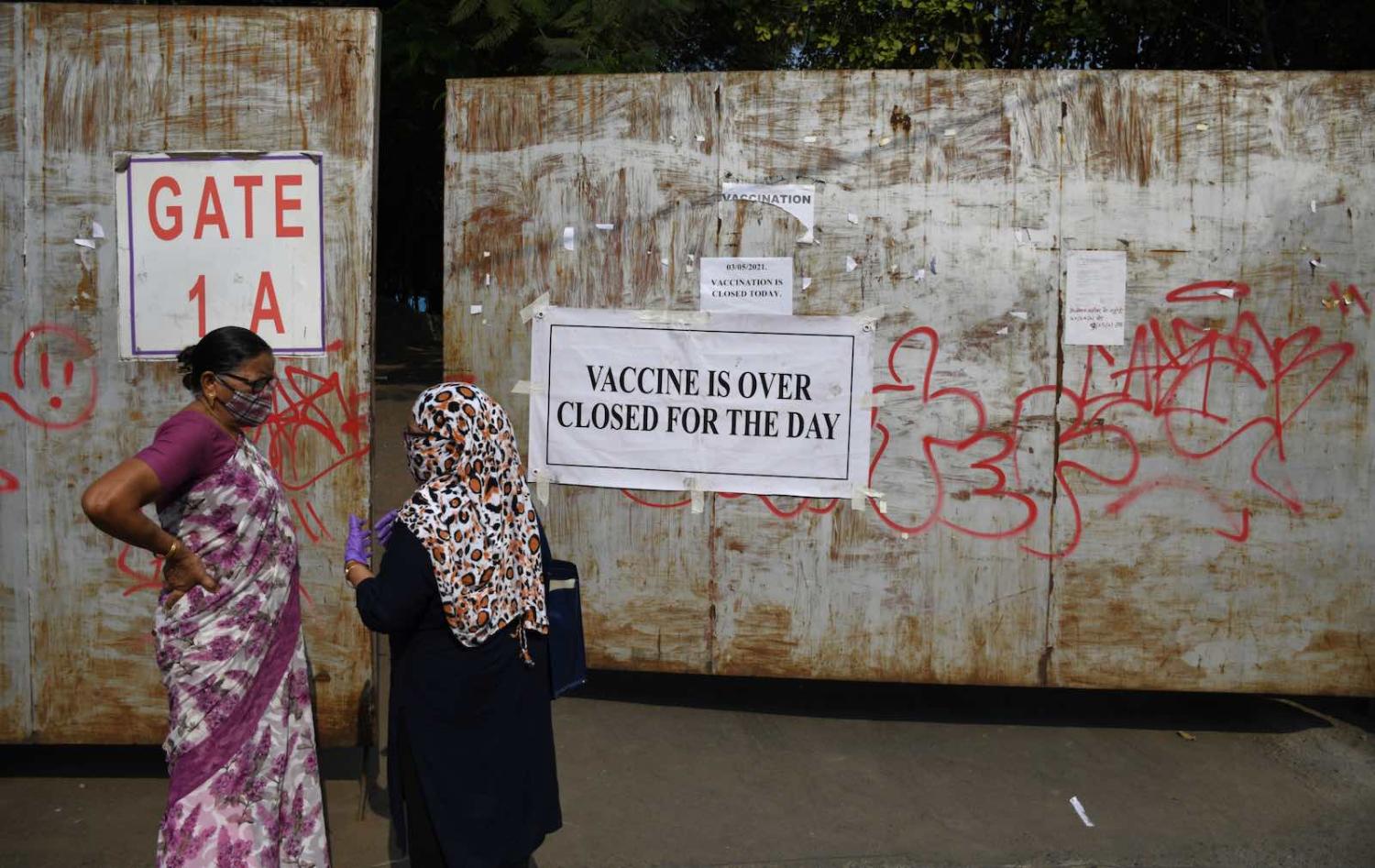 A vaccination centre in Mumbai on 3 May: people over 45 were turned away due to lack of stock (Ashish Vaishnav via Getty Images)
Published 4 May 2021

India was proud to boast about being the “world’s pharmacy” as the coronavirus pandemic unfolded, particularly after other members in the Quadrilateral Security Dialogue asked India to mass-produce Covid-19 vaccines for export across the world. Indeed, high-minded government decrees about India’s exceptionalism have become familiar to close observers in recent times, whether about India becoming the vishwaguru (world teacher) or India transforming into a global economic power. But the bragging has suddenly quietened now.

Less than two months after the Quad leaders gathered, a desperate India, devastated by a mix of arrogant misgovernance and an official aversion to scientific advice, resembles something more like an empty drugstore, run-down and ramshackle as the government pleads internationally for life-saving anti-Covid medicines and regular supplies of oxygen.

New Delhi’s mishandling of the second wave of the pandemic has resulted in a humanitarian disaster. The virus has proved relentless and levelling, poor and privileged alike struggling to find doctors, hospital beds and oxygen, or even the wood and space in crematoriums to burn the dead.

The health crisis has reinforced a sceptical view that despite the bold claims, India is not on the rails to becoming a world economic power. India spends a paltry 1.5% of its GDP on healthcare – some estimates put the figure as low as 0.34%. Either way, the spending falls far short of any of India’s partners in the BRICS grouping and nowhere near the 17.7% spent by the United States. Even before the pandemic, figures indicated the rate of poverty and unemployment in the country was at its highest in 45 years.

Covid has crushed all pretence. In March 2020, the sledgehammer lockdown wasted the country’s much-vaunted demographic dividend by precipitating the largest exodus of internal migrants in India since the 1947 partition. Rather than a government caring for its citizens to showcase strength, the image presented to the world was one of administrative incompetence, shambolic health facilities and economic weakness.

The innumerable pyres of Covid victims now glowing in India’s summer skies will put an end to the bragging about the country’s global power.

The crisis has exposed a ruling Bharatiya Janata Party government bedevilled by skewed priorities. Massive rallies, for example, were allowed with barely a face mask in sight in the vain hope of snaring power in state elections. In another instance, more than 9 million pilgrims were permitted to attend a Hindu religious gathering. As recently as 22 April, when Delhi’s lockdown was already one week old, the government was touting a US$3 billion project to build a new central vista as a seat of government, including a new parliament and prime ministerial residence, describing the construction as an essential service.

India’s pressures are mounting. Despite border clashes with China last year, money requested to modernise military equipment was cut by 38% in this year’s budget. The decision to remain aloof from economic groupings such as the Regional Comprehensive Economic Cooperation Partnership now look even more foolhardy and together with the Covid crisis could stunt the government’s Indo-Pacific ambitions. China’s latest defence budget is forecast to be US$209 billion, while India’s is $65.9 billion. A long-standing economic advantage has given China a military one.

But the government does not relish such facts. Regrettably, the suppression of the truth, which was a characteristic of Beijing’s tactics to cover up the outbreak of coronavirus in late 2019, is now a method used by New Delhi to hide its own negligence. It recently ordered Twitter to remove posts critical of the government. And people complaining about oxygen shortages have been threatened with seizure of property. But those who failed to build sanctioned oxygen plants seem have got off scot-free.

New Delhi has also passed the buck to its counterparts at the state level. The central government initially fast-tracked emergency approval for anti-Covid vaccines used in Western countries and Japan, but only a fortnight later, as the number of dead rose, it decided not to import vaccines, saying the states could. But many states do not have the cash to pay for vaccines, having already been entangled in a dispute with the central government over the share and distribution of revenue from the general services tax. Meanwhile, the self-styled global pharmacy has struggled to ramp up vaccine production to meet the urgent demand in India alone.

India’s humanitarian catastrophe is simultaneously a big foreign policy blunder. The innumerable pyres of Covid victims now glowing in India’s summer skies will put an end to the bragging about the country’s global power. A crisis compounded by ineptitude has cruelly increased India’s dependence on foreign assistance and swept away all illusion.

A recent survey reveals distrust of both China and the US across Southeast Asia, and a pragmatic sense of partnerships.
Bonnie Bley 24 Jan 2019 15:00

Lowy Institute at Davos 2019: how power adapts in a changed world

Arab Israelis have been slow to realise their potential pivotal role in the nation’s politics. That’s changing.