A new law that threatens to exclude Muslims from citizenship upends the idea of a nation built on liberty and equality. 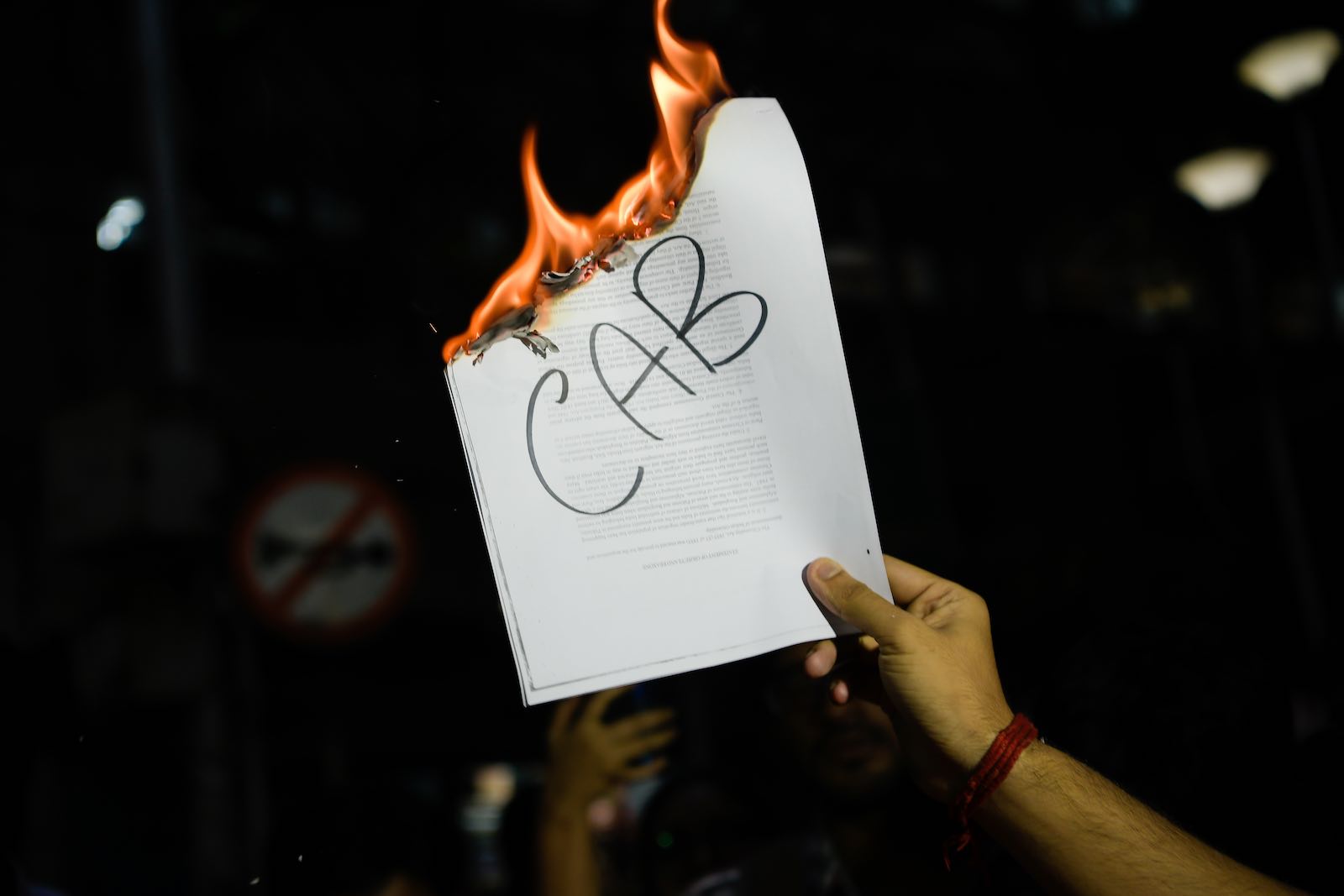 A replica of the citizenship bill is burnt during a weekend demonstration in Kolkata (Photo: Avijit Ghosh via Getty)
Published 16 Dec 2019 10:00   3 Comments       Follow @eddroy

It’s a testament to India’s founding fathers that the country is home to more than 200 million Muslims, and it has been a source of pride for many Indians that the country’s constitution was drafted to guarantee everyone equality under the law.

Earlier this month, the world’s largest democracy passed the so-called Citizenship Amendment Bill, or CAB, which will for the first time turn religion into a means of deciding whom to treat as an illegal immigrant. India, once founded as a secular state with special protections for minorities, is following in the footsteps of its theocratic neighbour, Pakistan.

The CAB is a clever attempt at seeming to protect minorities from neighbouring countries. It says Hindus, Sikhs, Jains, Parsis, Christians, and Sikhs, who came to India from Pakistan, Bangladesh, and Afghanistan, will not be treated as illegal anymore. These groups will have easy access to Indian citizenship.

But there is one important group that’s been singled out for exclusion: Muslims.

This is no accident.

Ever since Narendra Modi was elected prime minister in 2014, his government has threatened, cajoled, bullied, and legislated its way to making a once secular, diverse democracy into a nation dominated by the Hindu majority. Until now, the Bharatiya Janata Party’s majoritarian political ideal was confined to the political fringes.

The CAB is the result of a government that has used its executive and legislative majority to make laws that define citizens by their religion. The idea of a modern India, a Republic, with its caste, class, and religious contradictions built on the notion of liberty and equality, has been upended. The new laws have given state sanctioned legitimacy to the hard-line BJP belief that India is a Hindu civilization and that the myriad minorities that make up the population migrated from elsewhere.

The new laws are also the culmination of the long-held view by hard-line Hindu fanatics that India’s constitution needs replacing. Muslims, they believe, are descendants of Hindus who were forcibly converted. According to the Rashtriya Swayamsevak Sangh, the RSS, a forerunner of the BJP, so too are Christians.

All this leads to yet another contentious document: the National Register of Citizens, or NRC. The NRC was originally intended as an attempt by the federal government to identify illegal immigrants in the north-eastern state of Assam. India claims that many Muslim families came to Assam in the 1970’s from neighbouring Bangladesh and are therefore not rightful citizens.

The NRC was first published in August, and some 2 million people found that their names were not on it. If they cannot prove their citizenship, they will be put in detention camps and deported. For the moment, the NRC has been confined to Assam. But the government has plans to take it nationwide.

Already, protests are underway. In Assam’s capital, Guwahati, authorities have shut down the internet and implemented a curfew. The Indian army has been deployed in the north-eastern states of Assam and Tripura, with protestors yelling “Go Back Modi” and effigies of the prime minister being set on fire. Protests have also broken out in Delhi, Calcutta, Kerala, and Narendra Modi’s home state Gujarat.

Those in Assam whose names do not appear on the NRC have been told the burden of proof is on them to prove that they are citizens. A quarter of the population of Assam is illiterate.

The federal government is currently building the first of several detention camps it claims will house women and children. If the detainees end up being expelled from India, it would be one of the worst forced migrations in recent times. Equally unnerving is the fact that it there is no indication of where these stateless people would go. Bangladesh has said it will not welcome them.

Under the BJP, history is being rewritten in the nation’s textbooks, once proud institutions are crumbling, the public service is compromised, universities hamstrung, media silenced, and the judiciary cowed.

In true form, BJP leaders have been using inflammatory and dehumanising language to describe Muslims. Home minister and BJP president Amit Shah has described them as “termites” and claimed the NRC would be used to “remove them”. Last month, Amit Shah went further, the NRC he said would be used to make another count of citizens, this time across the nation. In other words, a clampdown on the 200 million Muslims who call India home.

They have every reason to be worried. Under Modi’s rule, the rate of hate crimes against Muslims has increased exponentially. And earlier this year, in an act that set the tone for subsequent moves to assert its authority over Muslims, the government unilaterally dismantled the statehood of India’s only Muslim-majority state, Jammu and Kashmir. Local leaders were put in jail, the internet was cut off, and the military put in charge.

For India’s 200 million Muslims and other minorities, what is happening now in Assam and Jammu and Kashmir is a harbinger of what is bound to come their way.

Opposition to the new laws is growing. Nearly 1000 intellectuals have written an open letter to prime minister Modi, in which they challenge the “use of religion as a criterion for citizenship” and argue that “the careful exclusion of Muslims from the ambit of the bill will greatly strain the pluralistic fabric of the country”.

The United Nations has also described the bill as “fundamentally discriminatory in nature”, while the country’s opposition has slammed it as “unconstitutional”. Several states, including Punjab, Kerala, West Bengal, Chhattisgarh, and Madhya Pradesh, have indicated they will not enforce the new laws, leading the way for what could be a long legal battle in the country’s supreme court.

But it may already be too late. Under the BJP, history is being rewritten in the nation’s textbooks, once proud institutions are crumbling, the public service is compromised, universities hamstrung, media silenced, and the judiciary cowed. The CAB and the NRC represents a fundamental shift in the idea of a democratic India.

Because for all its talk of inclusiveness and being minority-friendly, the BJP has never once attracted India’s Muslims, Jains, Buddhists, Christians, Parsis, or any of the myriad minority groups to accept their idea of “Hindutva”. And now it never has to.