Martial law is lifted, but “state of emergency” persists in Mindanao

The role of the military on the strife-torn island isn’t about to change – and will continue to ensnare legal activists. 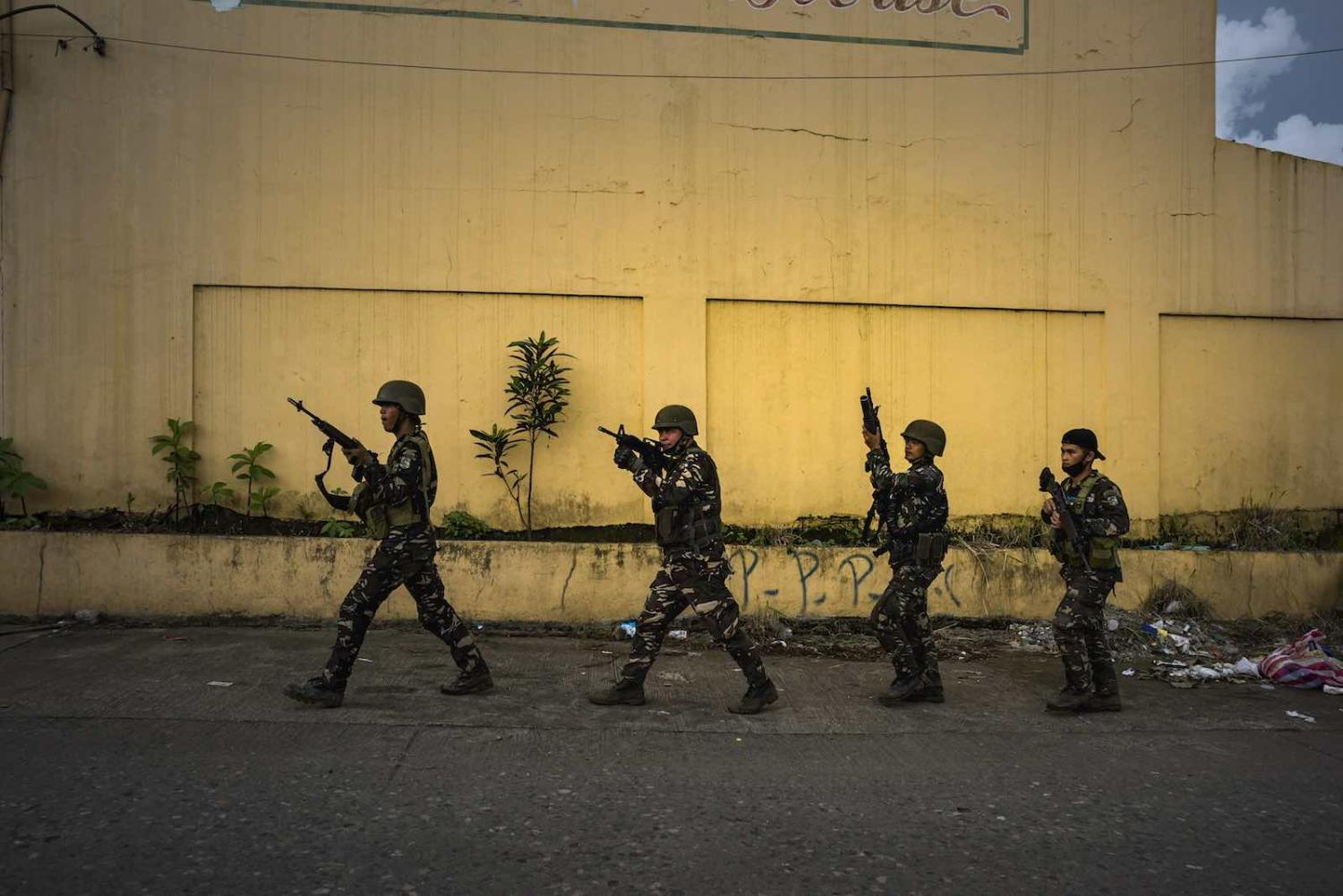 Martial law was lifted in the southern Philippines island of Mindanao on 1 January, an indication of what a military spokesperson called an “improved security climate” in the region. The move, in theory, ends 31 months of heightened military presence on the island, put into effect in May 2017, when local Maute rebels affiliated with the Islamic State seized the city of Marawi.

Investors have welcomed the end of martial law, which comes after the city council of Davao City pushed for its end last year, citing heightened costs of doing business.

Activists believe that as long as armed forces maintain a significant presence in Mindanao, they will continue to protect investments – not only from NPA rebels, but from farmers and indigenous communities who call the land home.

But many remain sceptical that the formal lifting of martial law will change much on the island, which remains torn by localised conflict between rebel groups and the Philippine military. In December, a Mindanao lawmaker said the Armed Forces of the Philippines and Philippine National Police would maintain or increase their presence on the island. Critics hold state forces responsible for a wide swath of human rights violations under the rule of President Rodrigo Duterte – both before and during martial law.

The Philippine military says it will continue operations targeting both Islamic State–linked terrorist groups and domestic communist rebel units. While the lifting of martial law may give confidence to investors, events throughout the country – and in Mindanao’s recent history – strongly suggest that the military’s campaign in Mindanao will continue to ensnare legal activists who vocally criticise government initiatives.

The “state of emergency” goes on

Mindanao remains under a nationwide “state of emergency” issued in September 2016, days after a deadly bombing in Davao left 14 dead.

The proclamation allows military and police personnel to impose checkpoints and curfews and gives armed forces wide latitude to collaborate in security operations. In several regions of the Philippines, this authority has been used to implement what local activists call a “mini-martial law.”

In the central island of Negros, the Philippine military was involved in operations in December 2018 and March 2019 that killed 20 farmers and local officials. The armed forces claimed the targets of the raids were members of the New People’s Army, an armed communist unit. This allegation has been disputed by local and global rights groups, and the International Labor Organization’s efforts to investigate the killings have been blocked by the Duterte administration.

On 31 October, 57 land and labor activists were arrested in raids in Bacolod, the largest city on Negros. Charges were dropped against all but 11 of them, and the raids were condemned by global observers, including US Democratic presidential candidate Bernie Sanders. Last month, however, the military filed a motion to reintroduce the dismissed charges against 31 of the released detainees – a move seen by local activist groups as an attempt to silence them.

Negros Island – along with the province of Samar and region of Bicol – have, since 2018, been subject to an executive order which calls for military and police forces to be deployed in coordinated operations to “suppress lawless violence and acts of terror.” It’s intended to target actual NPA rebels, but in practice, operations have been directed at legal activists – often government critics – who are branded as communists without evidence.

This branding, a practice known locally as “red tagging,” is especially prevalent in Mindanao – and a formal end to martial law will not mean an end to the military crackdown on the Philippine government’s legal critics.

The Philippine military has long had an extensive presence in Mindanao.

In 2008, then-President Gloria Macapagal Arroyo ordered the military to guard mining sites against NPA rebels, dubbing them “investment defense forces.” In reality, their role extended to ending territorial disputes by silencing local farmers and indigenous landholders who refused to give up their land.

Duterte promised to bring peace to Mindanao upon winning the presidency in 2016. His government signed a 2018 law giving more autonomy to Moro Muslims and, recently, has spoken of restarting peace talks with NPA rebels. But the military remains opposed to negotiations with communist rebels and retains a presidential mandate to “crush” the armed insurgency.

Investors may see the lifting of martial law in Mindanao as a sign that the island is open for business. But activists believe that as long as armed forces maintain a significant presence in Mindanao, they will continue to protect investments – not only from NPA rebels, but from farmers and indigenous communities who call the land home.

Even Marawi is still waiting to see changes. After martial law lapsed on January 1, many residents were surprised to learn a curfew remained in place – but with adjusted hours. A local military commander explained that the curfew, along with checkpoints and a ban on firearms, are part of military and police security measures “in compliance with the Proclamation 55” – Duterte’s 2016 “emergency” declaration.

It serves as a reminder that for many Mindanao residents, their homeland – one of the world’s deadliest places for environmental defenders – remains in a permanent state of emergency.

Understanding Australian traits and behaviours could explain how the country works with others – and how it’s perceived.
Claire Higgins 4 Aug 2017 13:13

Humanitarian corridors: Safe passage but only for a few

There is a counter-narrative emerging in Europe’s approach to irregular migration, even as EU governments seek ways to discourage desperate journeys to Italy.
Elliot Brennan 1 Mar 2018 07:00