With grace under pressure, Angela Merkel has led Germany through several emergencies. What of the next Chancellor? 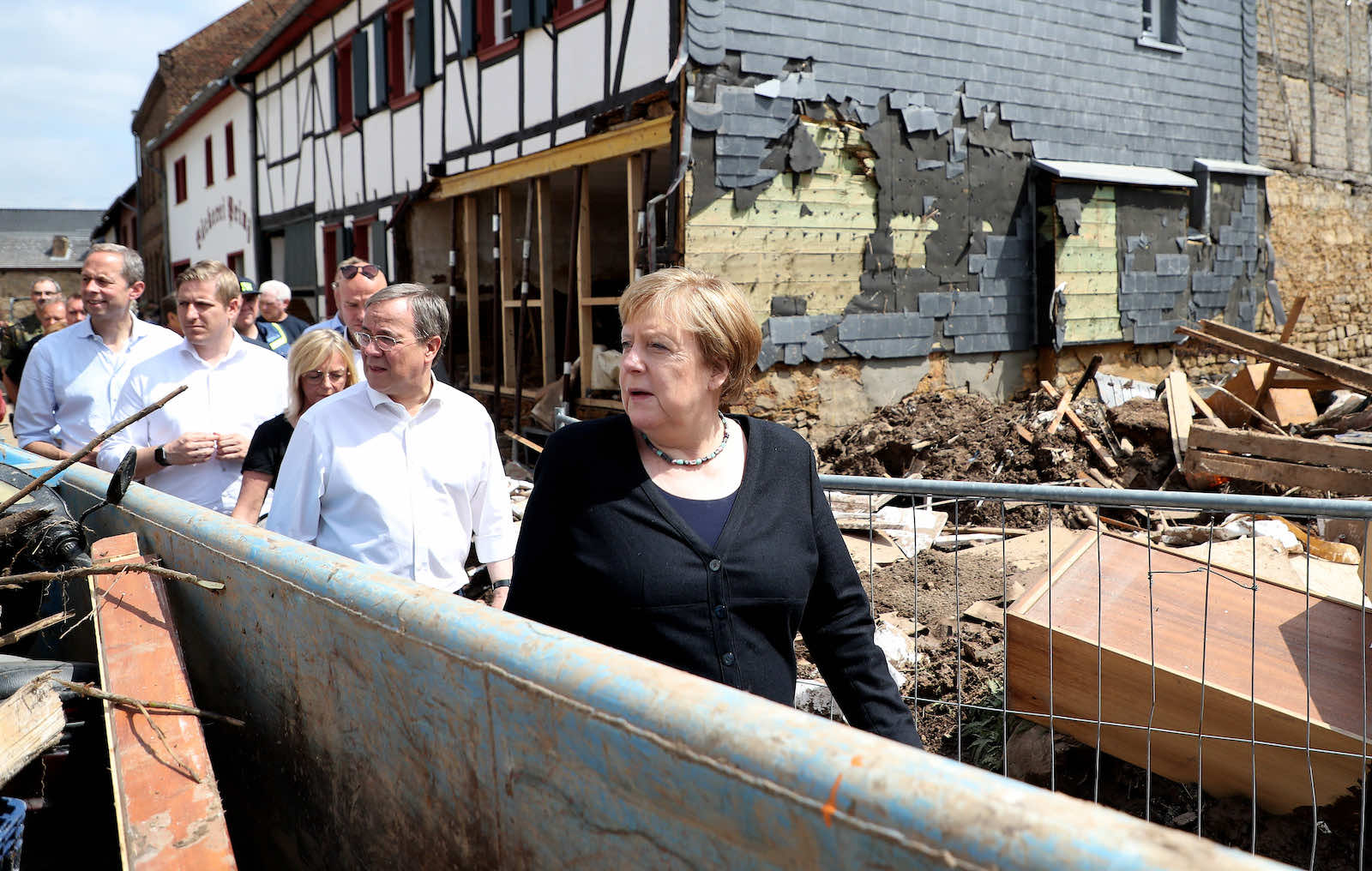 German Chancellor Angela Merkel inspecting damage after heavy flooding in the village of Bad Muenstereifel on 20 July. Merkel was accompanied by Armin Laschet, seen as a favourite to take over the chancellor position (Friedemann Vogel via Getty Images)
Published 28 Jul 2021 06:00   0 Comments

She was wading through debris left by catastrophic floods in the west of Germany. Outgoing Chancellor Angela Merkel had, last week, come to assess the damage and promise help to survivors. So, too, had all three candidates in the race to succeed Germany’s long-serving leader after the federal elections in September.

Floods can make or break political careers in Germany. Helmut Schmidt’s brilliant response to the disastrous stormfloods in his hometown of Hamburg in 1962 founded his popularity as a “doer” and his rise to chancellorship 12 years later. And Merkel’s predecessor Gerhard Schröder, trailing badly in the polls in 2002, pulled on his wellies, sloshed through the waters in a flooded town in Saxony and won the election a few weeks later.

So Merkel and her three clamouring successors followed tradition, and a certain expediency, when they splashed down in flood-stricken western Germany. But Merkel showed again when she is best – during crisis. She exuded the quality Germans estimate highest in politics – stability – best illustrated by the fact that Germany has had only four chancellors in the last 47 years.

Merkel has been at the helm for 16 years. She will probably topple the record of Germany’s longest-serving Chancellor Helmut Kohl by days, depending how fast the parties can wrangle a new government after the election. But while Kohl was ousted by the voters in the end, Merkel has chosen to go. And on a high. In all polls she is, by far, the most popular politician in the country. It was not always like this.

Merkel has led Germany successfully through several emergencies, from the global financial crisis to the Covid pandemic. She held the European Union together when the debit crisis threatened the Euro and later when Brexit-Britain left the EU – in her assessment – for self-destructive reasons. She is also flexible when logic dictates. After the Fukushima disaster, Merkel reversed her own policy and promised an end to atomic energy in Germany. She exhibits grace under pressure – her party turned on her after her decision to keep Germany’s borders open to hundreds of thousands of refugees from Syria and Afghanistan. Merkel’s poll numbers crashed, but she stared her opponents down. Why did she stand her ground? Not on moral grounds, but on logic. She believed the only way to save an already beleaguered southern Europe from probable social and political collapse under the weight of refugees was for Germany to take them. She arguably saved the European Union.

Sometimes her scientific mindset and role as politician collided.

She is no ideologist. Having grown up under Eastern Germany’s communist dictatorship, she is a staunch defender of democracy. Having worked as a quantum chemist before reunification, her approach is always analytical. “Facts are facts and have to be accepted”, she recently said.

Sometimes her scientific mindset and role as politician collided. Merkel, as federal minister for the environment in the 1990s, knew earlier than most of the developing climate crisis. But Merkel the politician regards politics as the art of the possible, and often supported Germany’s powerful car industry in their resistance to stricter emission standards. She defends the ecological record of her government, but now says, “I am equipped with sufficient scientific reason” to see that the handling of the climate crisis must accelerate. An admission of failure? Not quite. But a warning to her successor.

And what now, without her? Among the contenders for chancellorship, Olaf Scholz is highest in the polls. The 63-year-old vice-chancellor and treasurer is an experienced, savvy, if rather uninspiring, politician. Apart from being lacklustre, Scholz’s other problem is his own party. The polling rates for the Social Democrats (SPD), the equivalent of Australia’s Labor Party, have dwindled to a mere 15 per cent. The SPD has been decimated by endless inner party struggles, and suffocated by their long time coalition with Merkel’s conservative Christian Democratic Union (CDU). His only hope is that missteps by his competitors will give a last-minute boost in votes for the SPD.

And candidate two has, indeed, bungled her run-up. Annalena Baerbock, 40, the first-ever candidate for top job from the Green Party, had a slender but real chance of landing the Chancellorship. Under her leadership, the Greens’ poll numbers were the highest ever. But after Baerbock was exposed for embellishing her CV on her political webpage, her popularity headed south. The Greens, it is predicted, will pull 20 per cent of the vote in the federal election, but their bid for the Chancellorship has little hope.

Laschet – like Merkel – is no orator, but is skilled in negotiating compromises and forming alliances in the backrooms.

The bets are on Armin Laschet, 60, leader of Merkel’s CDU and premier of Northern Rhine-Westphalia, Germany’s most populous state. Laschet is one of the big boys. He reigns over a fifth of the German population. The CDU, together with its Bavarian sister party, the Christian Social Union (CSU), is far ahead in the polls, even after Laschet`s flat performance dealing with the pandemic. But Laschet has long been underestimated during his political career. Short and affable, with a soft Rhine accent, Laschet is relatable. Son of a coal miner turned teacher, he is a product of the Catholic youth associations, long-time recruiting grounds for the left wing of the CDU. Born and living still in Germany’s westernmost city Aachen, only a few kilometres from the borders of Belgium and the Netherlands, Laschet was, and is, agressively pro EU. As former minister for migration, he was Merkel’s staunchest supporter during the refugee crisis.

Laschet – like Merkel – is no orator, but is skilled in negotiating compromises and forming alliances in the backrooms. Many conservative party members still regard him as too soft for leadership. But Laschet has shown an astonishing tenacity during his political career. In his rise to the top, he was often second choice, appointed after first choices failed miserably. His narrow win in his state election four years ago came as a surprise. On the federal level, Defence Minister Annegret Kramp-Karrenbauer was heir apparent to succeed Merkel as party leader. But Kramp-Karrenbauer washed out due to her inability to whip the party into line after local politicians in the small state of Thuringia sided with the extreme right to get a premier of their choice elected. In stepped the steadfast runner-up, Laschet.

The question on Germans’ minds after the 26 September federal election is whether the next Chancellor will follow Merkel’s legacy? Will they be able to keep the European Union stable? Will they stand their ground against powerful opposition when a new crisis hits? Will they defend reason and multilateral cooperation in international affairs?

And most importantly, will they manage to maintain a position of reason against the vagaries of populism?