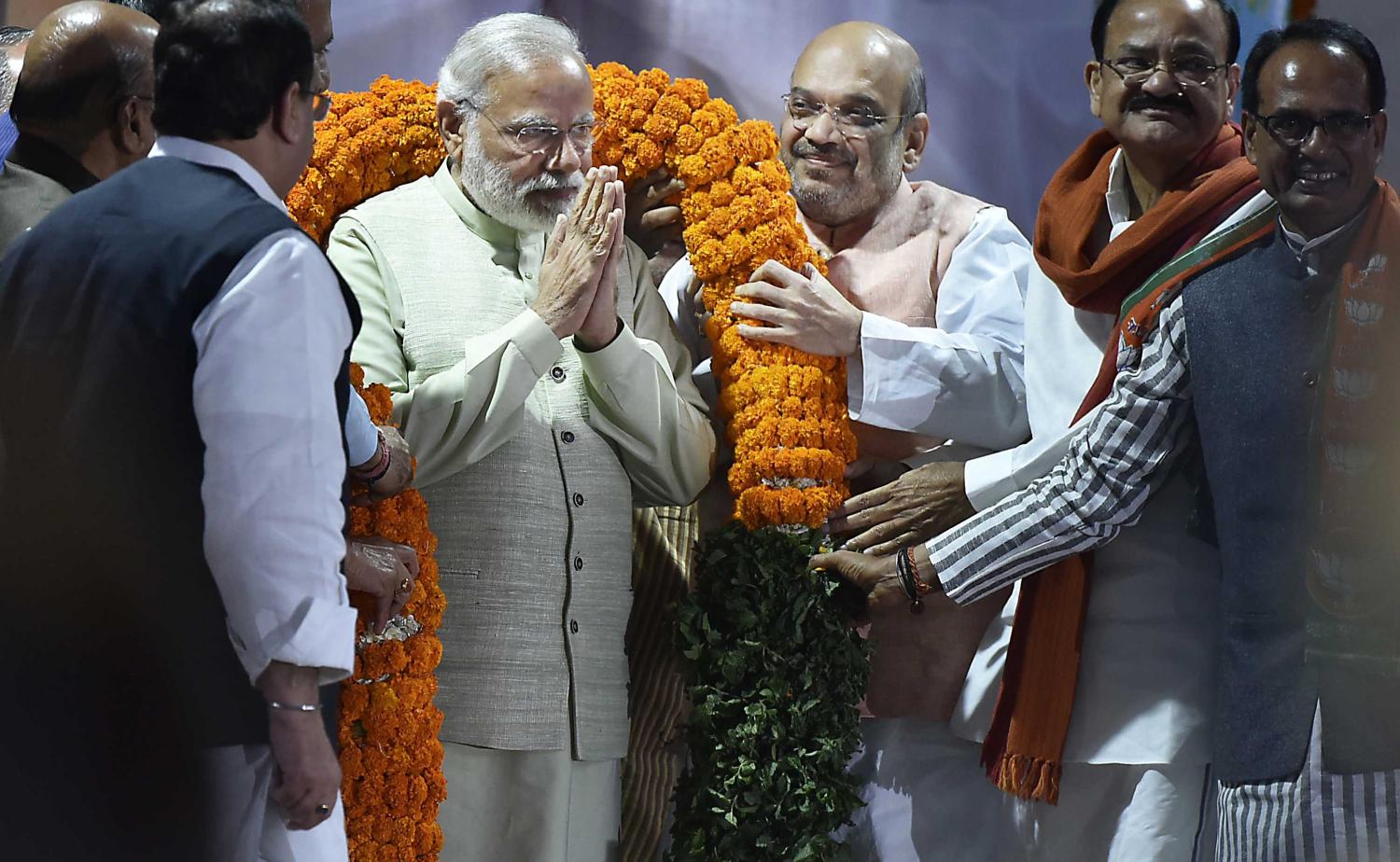 On 11 March, India’s Prime Minister Narendra Modi's Bharatiya Janata Party (BJP) won an overwhelming victory in state elections in Uttar Pradesh. In India, there are few more significant political prizes. Uttar Pradesh is the most populous state, home to over 200 million people, and the original base from which the BJP evolved into a national political force in the 1990s. The party also swept the northern Himalayan state of Uttarakhand, and through some aggressive horse-trading will lead governments in the southwestern coastal state of Goa and the northeastern state of Manipur, despite finishing second. These results more than made up for the decisive loss of Punjab by the BJP and its local ally, which was widely expected.

The latest round of state election results reinforces Modi’s popular mandate (two-thirds to four-fifths of Indians approved of his leadership over the past year), establishes him as a clear favourite to win another term as Prime Minister in 2019, and firmly consolidates his primacy within his own party.

What effect will Modi’s domestic political supremacy have on his foreign policy?

The international arena has been one in which Modi has been relatively unencumbered by legislative, bureaucratic, and intra-party politics. That may explain why he has been able to accomplish more on foreign policy than on signature elements of domestic policy, beyond a couple of notable exceptions. Over the past three years, Modi has moved firmly to consolidate strategic relations with the US and Japan, prioritised regional integration and leadership (both in South Asia and the Indian Ocean region), courted the Indian diaspora, and made unprecedented progress with Israel and the Gulf Arab states.

The downsides have related to sharpening relations with China, little movement on trade, a sense of drift in ties with old friend Russia, and continuing frustrations with Pakistan despite bold outreach efforts and punitive measures. Some of these can be partly attributed to factors outside of Modi's (and India's) control, such as the continuing Ukraine conflict and the China-Pakistan Economic Corridor.

Taken together, do these developments comprise evidence of a definitive Modi Doctrine? Yes and no. In many respects, Modi has continued or accelerated several trends in India’s external engagement that date back to the 1990s and early 2000s. These include improving relations with the US, a conscious policy of diaspora engagement, enhanced partnerships with Japan and Israel, and deepening economic ties with China. But at least four factors have enabled clearer breaks from India’s past policy and approach.

The first is that since 2014 Modi has benefited from a strong electoral mandate, allowing him to pull along public opinion rather than remain constrained by it. For example, Modi’s predecessor Manmohan Singh was prevented from visiting Pakistan by his own party, concerned about voters’ perceptions. By contrast, Modi flew in at short notice to Lahore in 2015, and dropped in at the private residence of his Pakistani counterpart Nawaz Sharif. He was also able to keep engagement with Pakistan alive for over two years, despite repeated Pakistani provocations and adverse public opinion. Modi’s political capital was similarly exerted in several other directions, and he brought to fruition agreements or policies concerning the US, China, Japan, and Bangladesh on which previous governments had dithered.

Second, Modi brings a strong work ethic to foreign affairs, which is in part a product of his relative youth and personal energy. Early in his tenure, Modi faced criticism for spending too much time abroad. But his foreign sojourns are in fact comparable in duration to those of his predecessor. However, he has managed to cover a lot more ground, with busy swing tours through Central Asia, the Indian Ocean, and Eastern Africa allowing him to touch down in about one country per day. Modi also committed to a steady schedule of high-level visitors to New Delhi and major India-led summits, such as with African and Pacific Island leaders.

Third, despite having been dismissed as a novice on international affairs by many Indian commentators, Modi demonstrated a ready instinct for diplomacy. In effect, Modi showed an ability to translate his keen understanding of power in domestic politics to the international stage. This has resulted in a sharp understanding of areas of influence and balance of power, and has helped identify clear priorities, such as in India’s immediate neighbourhood and in external partnerships.

Fourth, Modi demonstrates a clear understanding (perhaps more than most analysts or commentators) of how intertwined international politics is with domestic politics. An earlier round of state election successes demonstrated that his addresses to the Indian diaspora resonated positively with voters. The Indian public, at some level, seems to like their prime ministers as global statesmen. There is little reason to expect Modi’s diplomatic endeavours to take a back seat to domestic politics in the run up to the next general election in 2019.

India’s fundamentals are today stronger than they have been for some time. The economy is purring along, although with considerable room for improvement. National politics is relatively stable. The international environment, though, is another matter. With the uncertainty unleashed by Donald Trump’s election in the US, India will strive to further its cooperation with other actors: Europe and Japan, China and Russia. The latest election results do strengthen Modi’s hold on political power in India, but we can expect a lot more of the same in his approach to international affairs: some risk-taking, more energy, greater clarity, and (as usual) a dash of showmanship.

A winding back of hard-won women’s rights in Europe has implications for us all.
Erin Hurley 11 Nov 2020 11:30