Myanmar: Calling a coup a coup

The military argues that it has operated within the country’s constitution. That’s simply not true. 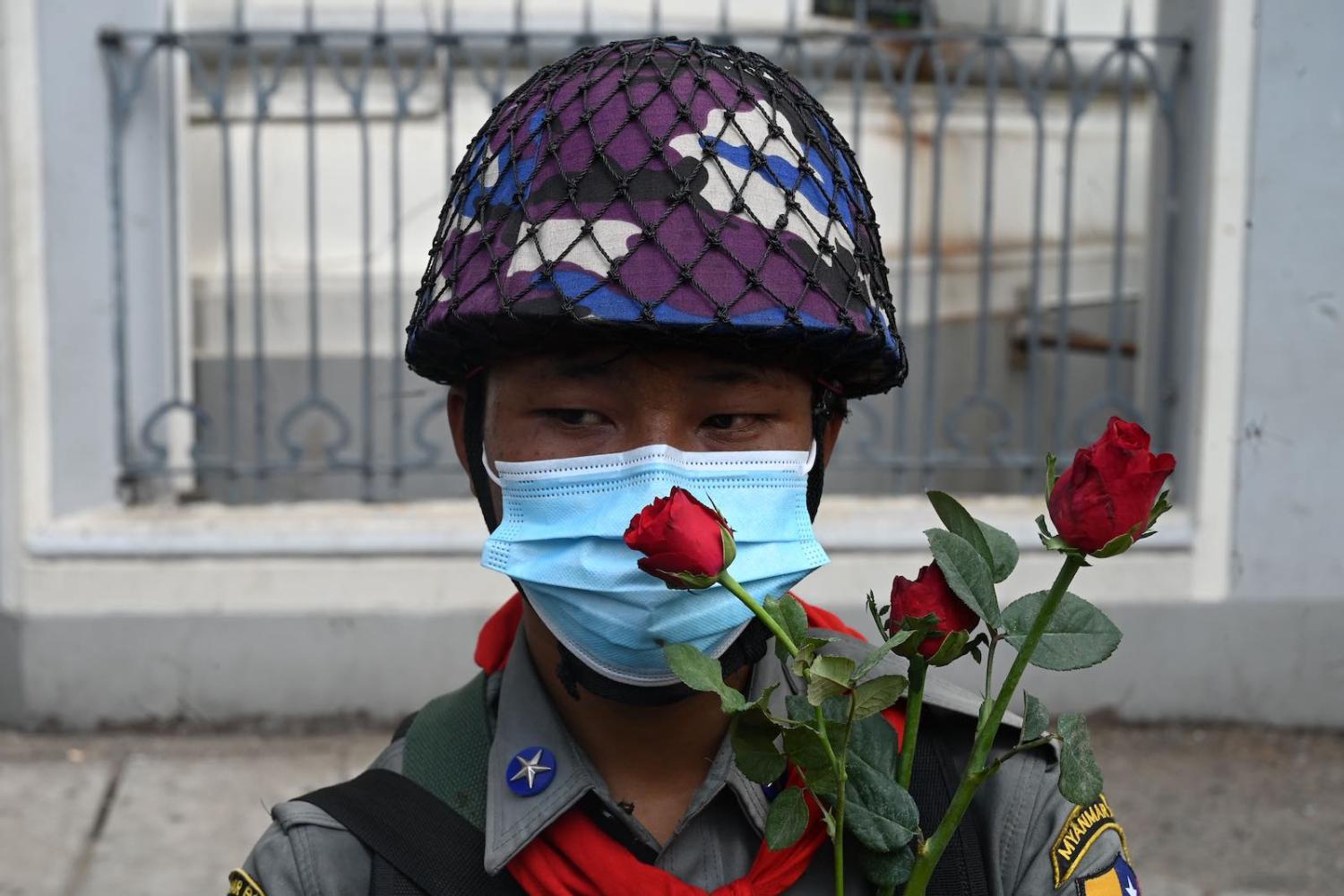 A policeman during a demonstration against the military coup, Yangon, 7 February (STR/AFP via Getty Images)
Published 8 Feb 2021     Follow @AdamJSimpson2

The military takeover in Myanmar on 1 February was clearly unconstitutional, although there has been little detailed investigation of why. The US State Department announced that it regarded the takeover as a coup d'état but failed to provide a legal rationale.

When is a coup not a coup? And why does it matter?

There was some debate, especially soon after the military takeover, whether it actually constituted a coup, since the military wrote the country’s 2008 constitution and provided a number of key safeguards within it to protect military autonomy and power.

In some ways an arcane debate about the legality of the Myanmar military takeover is moot: they have now taken power and will likely control the machinery of government until they step down. Law in Myanmar has always been flexible and “mostly serves to give a veneer of legitimacy to the use of power”.

Claims made by the Myanmar military, both immediately before the takeover and ever since – that they are protecting, and acting within, Myanmar’s 2008 Constitution – have no basis.

It’s true that there are many other aspects of the coup and its disturbing consequences that require analysis, such as the growing public protests amid the blocking of social media and the internet. These blackouts may be a precursor to violent repression of the protests although Myanmar has changed irrevocably since the last military crackdown in 2007. The population has experienced a decade of political freedoms, economic advancement and connection to the world through mobile phones and social media. The military may have badly misjudged the people’s response to the coup and their collective fury over their hard-earned votes being nullified.

Nevertheless, local protesters still need unified global pressure applied to Myanmar’s generals to return the country to some semblance of civilian rule and that requires garnering support from countries with questionable democratic qualities such as China, Russia and some countries within ASEAN.

These countries are less likely to agree to punitive measures if they can conceivably claim that the generals acted constitutionally. On 4 February the UN Security Council, led by the UK, managed to craft a statement acceptable to China and Russia expressing their “deep concern” at the declaration of the state of emergency but it stopped short of calling the intervention a coup; China’s state media went so far as to call it a “cabinet reshuffle”.

It is therefore crucially important to clearly demonstrate that the claims made by the Myanmar military, both immediately before the takeover and ever since – that they are protecting, and acting within, Myanmar’s 2008 Constitution – have no basis.

The military’s constitutional basis for the coup

In the early hours of 1 February, on the day the newly elected members of parliament were to be sworn in, the military arrested state counsellor Aung San Suu Kyi, President Win Myint and other key figures from the governing National League for Democracy (NLD) party.

Following the arrest of Win Myint, Myint Swe, the former general and military-appointed vice president, was elevated to acting president under section 73(a) of the constitution, which states that the vice president

… who has won the second highest votes in the presidential election shall serve as acting president if the office of the president falls vacant due to his resignation, death, permanent disability or any other cause.

According to the military, this article clearly allowed Myint Swe to take control of the government and a few hours after the arrests a statement was read out on the military-owned television, indicating that the acting president, presumably after consultation with military members of the National Defence and Security Council, had declared a state of emergency for 12 months under section 417 of the constitution.

The nominal rationale for the declaration was that the NLD government had refused to “settle the issue of voter list fraud [together with] a failure to take action … to postpone lower-house and upper-house parliament sessions”. This resulted in “acts or attempts to take over the sovereignty of the Union by wrongful forcible means” that could lead to a “disintegration of national solidarity”.

This argument is a significant stretch in interpreting the constitution. The military has not provided any evidence that fraud was committed in the election, despite arguing that there were 10.5 million potential cases, and the allegations were very unlikely to cause national disintegration since clearly most of the population approved of the result. The NLD’s landslide win in November was almost identical in scale to every other election contested by the NLD held under the military and its proxies, in 1990, 2012 and 2015. It is extremely unlikely that a quarter of voters had suddenly turned their back on Aung San Suu Kyi and the NLD for no discernable reason.

Further, the announcement, formalised in a Ministry of Foreign Affairs press statement issued a few days later, stated that the legislative, executive and judicial powers of Myanmar had been transferred to the commander-in-chief, Senior General Min Aung Hlaing, in accordance with section 418(a) of the constitution.

Under section 419 of the constitution Min Aung Hlaing then set up an 11-member State Administrative Council (SAC) to govern the country, of which eight members were from the military.

Why did the military act now?

The timing of the intervention relates to a conjunction of a range of factors regarding the deteriorating NLD-military relationship and the impending retirement of Min Aung Hlaing in July, which would stifle his political ambitions and also leave him open to prosecution in international courts in relation to state violence against the Rohingya. However, a crucial section of the constitution created an additional sense of urgency for the military.

Section 73(b) of the constitution states that if the office of the president becomes vacant when the parliament is in session, the acting president shall direct the head of the parliament to fill the vacancy within seven days.

This meant that if the new parliament had been sworn in, the acting president would have been constitutionally obliged to ask the NLD-appointed Kachin member of parliament, T Khun Myatt, who was speaker of the lower house and the combined parliament, to undertake a parliamentary vote which would eventually elect a new president. This would have given the NLD control over the process.

In theory, the acting president could still declare a state of emergency, but the clarity over who had this authority would have been lost. When the parliament is not in session the constitution is less clear about the immediate succession of events.

Once the state of emergency was declared, T Khun Myatt was also arrested, which removed any doubt as to who was in control.

The gaping hole in the military’s argument

While there are a range of dubious arguments made by the military over the constitutionality of their action, there is one clear breach at the beginning of the process which renders the remaining sequence of events illegal.

Aung San Suu Kyi and President Win Myint were charged with separate offences. Suu Kyi was charged with violating section 8 of the Import-Export law after a raid of her Nay Pyi Taw home turned up six unregistered walkie-talkies that were being used by her security team.

Win Myint was charged with violating COVID-19 restrictions under section 25 of the National Disaster Management Law during election campaigning in September, when he allegedly emerged from his presidential residence to wave at a passing NLD convoy. Both charges carry a potential prison term of three years and could rule them, and potentially the NLD, out of the next election.

While it really does speak to the military’s grasping at straws, that after five years of NLD government these are the sort of petty charges they are depending on to remove the party leadership, there is a more critical element to this story.

As a result, if Win Myint claims that his actions – waving at an NLD convoy – were done in the exercise of his duties as president he is immune from prosecution, rendering the arrest and all the military’s subsequent actions unconstitutional.

Online restrictions imposed on the Rohingya in Myanmar and in refugee camps in Bangladesh should be repealed.
Greg Earl 11 Mar 2021 15:00

Companies are finding themselves torn between conscience and keeping the lights on when it comes to Myanmar.
Elliot Brennan 31 Jan 2017 12:07

U Ko Ni's assassination a symptom of deepening divisions in Myanmar

U Ko Ni’s death need not be in vain; it should be a wake-up call to the deepening societal divisions across Myanmar.