India’s Prime Minister appears set on a renewed mission to woo the neighbours – bar one – into seeing the world his way. 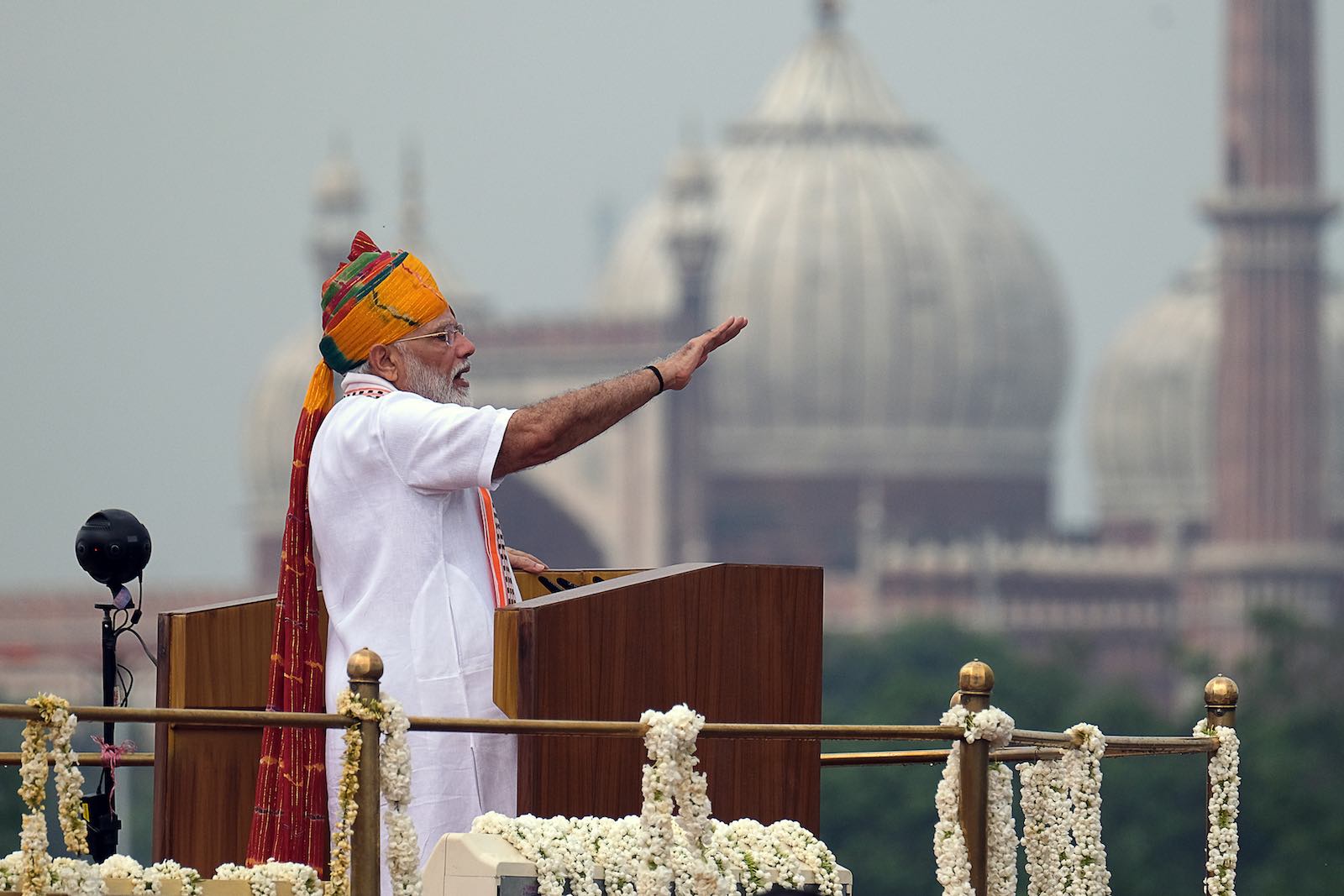 Prime Minister Narendra Modi’s speech last week from the ramparts of the Red Fort in New Delhi to mark India’s Independence Day carefully delineated his new strategic and foreign policy in the region. We can call this “nudge diplomacy”, and it stands in stark contrast to the more assertive stance of his first term.

Much of India’s new foreign policy approach can be understood by looking at what Modi did not say in his speech. Delivered 10 days after the abrogation of articles 370 and 35A, which stripped Jammu and Kashmir of its special autonomous status, Modi carefully omitted mention of Pakistan. Yet he spoke about the threats of global terrorism to India’s neighbourhood of Afghanistan, Sri Lanka, and Bangladesh, and the greater need for India to “unite all world forces to end terrorism”. Modi’s new doctrine has been formulated to reach out to its neighbours to tackle Pakistani terrorism while also strengthening regional connectivity.

Modi’s “nudge diplomacy” is not without context. Inspired by the work of Nobel laureate Richard Thaler on “nudge economics”, Modi’s social and economic policies such as Swachh Bharat Campaign (Clean India) and demonetisation have largely been carried to change, or “nudge”, the behaviour of the Indian population. The recently published Union Finance Ministry’s economic survey of India states “nudge policies gently steer people towards desirable behaviour even while preserving their liberty to choose”. While the success of the demonetisation is still debatable, the social campaigns targeting cleanliness and making India free of single-use plastic have been more effective.

A day after the the Prime Minister’s speech, Defence Minister Rajnath Singh hinted that India may change its stance on the “no first use” policy on nuclear weapons. There would be nothing at all subtle about such a change.

This same nudge tactic being used at home is now clear in foreign policy, too. A key facet of the “nudge” has been India’s use of its development cooperation agenda arguably as a means to leverage its soft power in the sub-continent.

Under Modi’s “neighbourhood first” policy, three out of the six bilateral visits that he has undertaken since his re-election in May have been in the region – to the Maldives, Sri Lanka, and Bhutan. In all three visits, Modi signed a number of cooperation treaties in the areas of security and trade strengthening the diplomatic ties. There have also been multilateral initiatives. The Bay of Bengal Initiative for Multi-Sectoral Technical and Economic Cooperation (BIMSTEC) and Bangladesh Bhutan India Nepal (BBIN) energy network have been established as a part of this regional development framework to foster connectivity.

Importantly, the emphasis is not on Pakistan, even if the idea is to nudge Pakistan aside. This is also clear as Modi has a sub-regional diplomatic agenda, where he is attempting to create sub-SAARC (South Asian Association for Regional Cooperation) unity, given the main SAARC body has been repeatedly held ransom by the India-Pakistan rivalry.

In a further example from Modi’s speech last week, he specifically praised Afghanistan as a “friendly neighbour”. As the US looks to withdraw its troops from Afghanistan, India fears their departure will embolden local militant groups such as the Taliban, which could then spread their influence to Pakistan and Kashmir. The recent diplomatic initiatives by the US and Pakistan to stabilise Afghanistan by bringing the Taliban to the table have further worried India about growing Pakistani influence in the region. But highlighting the long history of Afghanistan’s independence during his speech, Modi has sought to nudge Afghanistan away from Pakistan’s influence, reiterating its support for political reconciliation to be “Afghan-led, Afghan-owned and Afghan-controlled”.

During Modi’s first term, New Delhi flexed its military muscles in the controversial 2016 “surgical strikes” against Pakistan, while diplomatically asserting a tougher position under its “Act West” policy, insisting on joint statements condemning terrorism after meeting those countries with close relations with Pakistan – Iran, Qatar, Saudi Arabia, and the United Arab Emirates.

How far Modi’s new and more nuanced approach to foreign policy will extend is not entirely clear. A day after the the Prime Minister’s speech, Defence Minister Rajnath Singh hinted that India may change its stance on the “no first use” policy on nuclear weapons. There would be nothing at all subtle about such a change.

Still, for now, Modi himself appears determined to set out on his second term with a strong diplomatic drive to woo the neighbours and nudge them across to India’s way of thinking.