Will Tokyo’s tough stance against recent rulings in Seoul deter claims from other Asian countries? 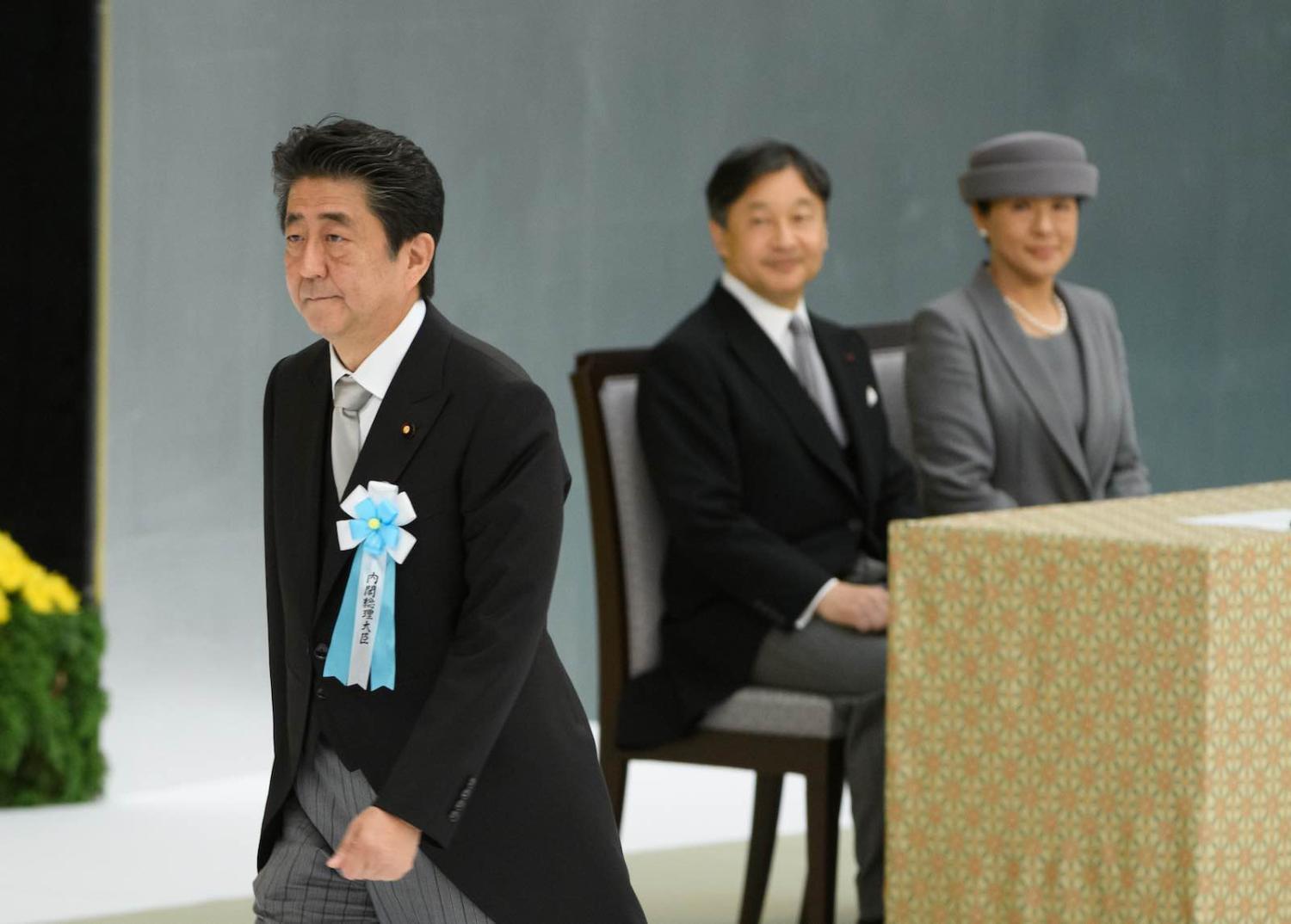 Japanese PM Shinzo Abe walks past Emperor Naruhito and Empress Masako during a service to mark the 74th anniversary of the end of the Second World War, Tokyo, 15 August 2019 (Photo: Akio Kon via Getty)
Published 19 Aug 2019

Friction between South Korea and Japan has intensified in recent months, with serious implications ­in the economic and security realms. Tokyo has taken steps to impose export restrictions targeting key industries in South Korea, to which Seoul has responded with a widespread boycott of Japanese products and services, its own export restrictions, and threats to withdraw from an intelligence-sharing agreement.

The core driver of recent tensions is widely acknowledged to be a series of legal rulings in South Korea that mark the latest chapter in the region’s “history wars”. The court has ordered Japanese companies to pay compensation to individuals for forced labour that took place during Japan’s colonial occupation of the peninsula.

While South Korea is the primary focus in this tension – with unresolved bilateral disputes rapidly piling up – Japan fears other nations across the region could dredge up claims stemming from its imperial past. Tokyo has strongly rejected the latest South Korean rulings, with the justification that the 1965 Treaty on Basic Relations settled all claims. But in a telling remark on the issue of further compensation, an official in the Japanese Foreign Ministry reportedly asserted, “We can’t make any compromise. Even one millimetre.” Another official stated that any concessions to Seoul could provoke fresh claims from other states previously on the receiving end of imperial Japan’s mistreatment.

Despite Japan’s unease, others do not seem likely to follow in South Korea’s footsteps with their own contemporary legal claims against Japan. These states’ experiences can be broadly categorized into two groups.

In the end, regional states away from the Korean Peninsula are far more likely to continue to focus on conciliatory relations than to reignite historical issues, regardless of developments between the Abe and Moon administrations.

First, there are Indonesia, Malaysia, and Myanmar, where wartime interactions between local nationalist and occupying Japanese forces created some of the impetus for those states’ post-war independence.

Indonesia’s first President, Sukarno, was the chief recruiter of the rōmusha (labourers) during wartime to support the growing anti-colonial movement against the Dutch rulers. Elsewhere, against the backdrop of the Thailand-Burma “Death Railway” construction, Japanese occupiers inadvertently empowered the anti-colonial movement in Burma (now Myanmar) through its dealings with local nationalist leaders, contributing to Burma’s post-war independence.

Although there was strong anti-Japanese resistance in occupied Malaya, this was complicated by the disdain felt towards the preceding British rulers by many Malays and Tamils. After the war, this sentiment eventually played a role in prompting Prime Minister Mahathir Mohamad to favour both Japan and South Korea as growth models for Malaysia, in contrast to the West, as part of his 1980’s Look East policy. The issue of Japan’s blood debt among the Malayan public had led the Tunku Abdul Rahman government to raise it with Japan in 1963. Even after reparations were paid to the Malaysian government in 1967, and despite Japan’s continued dismissal of these claims, Malaysian victims still campaigned on this issue for decades – a practice that continued until around 2008.

Together, the nationalist groups in the former Western colonies of Indonesia, Malaysia, and Myanmar interacted with Japanese imperial power in ways that would pave the way for largely positive post-colonial interactions – as economic recovery from the war led to a renewed emphasis on development in Asia.

The second group of countries, China and the Philippines, have also seen former forced labourers pursue wartime compensation claims, despite their respective governments resolving wartime damages through bilateral agreements and official development assistance (ODA). Chinese and Filipino victims have also tended to push for unpaid wages and damages until recent years, in comparison to the clamour for strengthened remembrance and acknowledgement of wartime forced labour by most Death Railway victims. Unlike the sustained pressure coming from South Korea, however, claims relating to forced labour compensation by these survivors and their kin have not become a point of contention in the diplomatic relations of these nations with Japan.

In similar fashion to other regional states affected by wartime occupation, governments in Beijing and Manila have increasingly seemed to prioritize economic gains over nationalist instincts. Intending to move beyond historical disputes, Prime Minister Shinzo Abe and President Xi Jinping have previously pledged to “deepen cooperation” by exploring opportunities within the One Belt, One Road initiative. More recently, US tariffs promulgated by the Trump administration have also contributed to closer cooperation between the two countries. Similarly, Philippine President Rodrigo Duterte finds the economic benefits of close ties with Japan incredibly valuable, with Tokyo remaining the Philippines’ top development donor. The current administration’s “Build, Build, Build” program is also at the forefront of Manila and Tokyo’s bilateral relationship, with the Duterte administration seeking to expedite its implementation to improve the deteriorating critical infrastructure in the country.

Initially taking the form of reparations, development loans and grants have also poured into Indonesia, Malaysia, and Myanmar, establishing the current trend of economic-based relations between Tokyo and Southeast Asian states. Hefty sums in the form of investment and ODA are still being injected, contributing significantly to economic prosperity and development.

In the end, regional states away from the Korean Peninsula are far more likely to continue to focus on conciliatory relations than to reignite historical issues, regardless of developments between the Abe and Moon administrations. Japan’s posture towards the South Korean government should therefore be assessed in the unique context of the two neighbours’ historical relationship and opposing nationalisms, without requiring justification from elsewhere in the region.

Taiwan's diplomatic allies, Trump takes on Iran, and anti-gay laws in Singapore: The week that was on The Interpreter.
Khang Vu 4 Jun 2019 06:00