A new Marcos gets down to business

After an easy election win, the Philippine president is facing challenges at home and abroad. 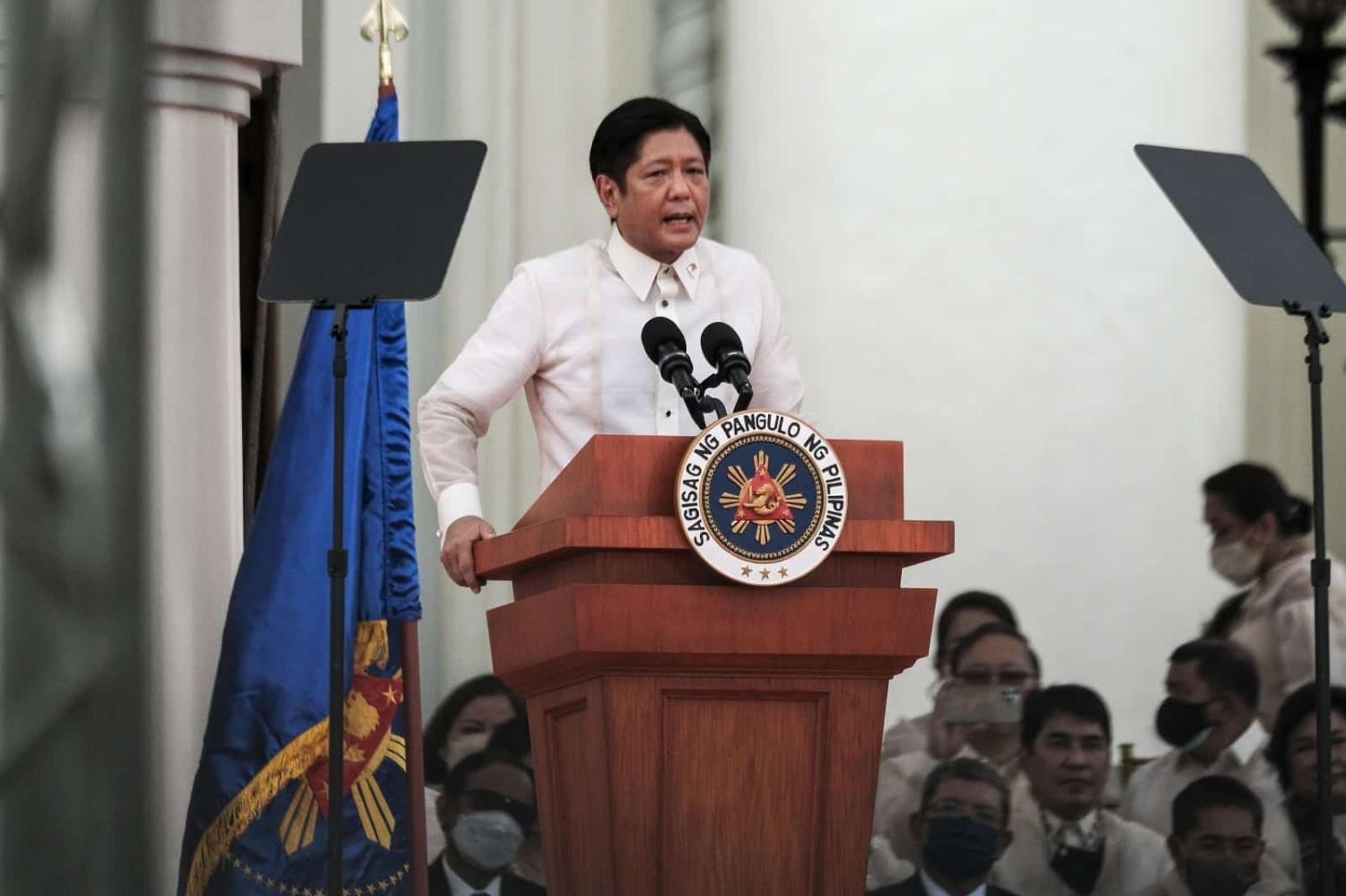 Ferdinand Marcos Jr during his swearing in as president at the Old Legislative Building in Manila, the Philippines, 30 June (Veejay Villafranca/Bloomberg via Getty Images)
Published 25 Aug 2022     Follow @Greg__Earl

As Australia’s former prime minister Scott Morrison has drawn international attention for his efforts to secretly grab power, the region’s newest leader is facing his own questions about power sharing – but while still in office.

Ferdinand Marcos Jr appointed himself agriculture secretary after he won the Philippines presidency in May, something only done twice before by his predecessors when they cautiously also took charge of Defence. But, perhaps not surprisingly, one of them was Marcos’ father in 1965. Marcos took on the unorthodox additional job because he wanted to make agriculture a key priority of his government, an understandable ambition in a fertile but populous country fretting about its dependence on imported food.

Filipinos are still coming to grips with just what they have done by handing the presidency to the son of the disgraced former 1970s dictator.

At the time, sceptics raised questions about whether this was the best way to prioritise agriculture when a president has so many other things to do and would have been better off giving close support or attention to a competent line minister. Some observers say it has undermined departmental work as officials wait for presidential orders in a new administration with plenty to do. But others say officials are even more loath to report bad news upwards.

The experiment has come adrift this month with a scandal over senior agriculture officials approving the emergency import of sugar to head off a shortfall without approval of the president-turned-secretary. Bizarrely, the officials reportedly thought the president would be too busy to notice they had taken a dramatic action that benefits manufacturers of sweetened food and drink.

This saga has broader implications because Filipinos are still coming to grips with just what they have done by handing the presidency to the son of the disgraced former 1970s dictator. “I backed the opponent [former vice president Leni Robredo]. I don’t know how I got that so wrong,” says one local businessman with a typical curious mix of bewilderment and nonchalance.

The big question is whether the prodigal son can escape the unsavoury shadow of his father by, for example, facilitating a new green revolution in agriculture, where about half the labour force is employed, or even balancing relations with China and the United States better than Australia.

“Marcos is unnecessarily risking his popular support in being agriculture secretary himself, as that department is seen by the public as the lead agency in ensuring food prices,” Manila Times columnist Rigoberto Tiglao wrote last week as the saga overshadowed other administration initiatives. However, agriculture received a generous 40 per cent spending increase in this week’s generally expansive budget.

One of the striking things from a short visit to the Philippines last week is how much economic reform occurred during the previous Rodrigo Duterte years when the world was more focused on extra-judicial executions and erratic foreign policy rhetoric. A series of new laws covering privatisation, reduced foreign ownership limits and tax incentives have been passed in the past year, a counterintuitive legacy of the Duterte regime but a handy soft landing for Marcos.

Observers say the new president, seen as a policy-free zone during the campaign, is now being seriously tested by officials and business interests.

The new president has set out in a much more orderly way than his predecessor with the appointment of credible officials such as former central bank governor Benjamin Diokno as finance secretary. He even served in the reformist Corazon Aquino government, which took over after Marcos’ father was forced out of power in 1986.

And one of Marcos’ first decisions was to reject tax concessions for a special economic zone including a new airport, which was backed by his senator sister Imee. He stressed fiscal prudence in the face of a US$200 billion pandemic-inflated national debt in making that decision and has been balancing the sugar saga by sacking officials but allowing a smaller amount of emergency imports.

Observers say the new president, seen as a policy-free zone during the campaign, is now being seriously tested by officials and business interests as the slowing global economy bears down on the country.

Marcos seemed to be in a sweet spot as he became the clear election campaign front-runner earlier in the year with surging economic recovery after a devastating pandemic. But the sugar import issue is his first moment of truth over whether he can manage economic credibility in reforming an old inefficient industry with a sea of vested interests as the global economic environment cools.

The president is set to introduce the new-look Marcos dynasty to the world when he makes his first overseas visit to Singapore and Jakarta in early September. That will be followed by the United Nations General Assembly in New York later in the month, which is more significant because of the opportunity it provides to meet US President Joe Biden.

The Biden administration has pragmatically shrugged off suggestions Marcos would face difficulty visiting the United States due to lingering legal cases involving the family in that country, in a contrast to the way the Obama administration gave Duterte a cold shoulder.

The new president met Mao Zedong in 1974 on a warm-up mission with his mother Imelda, who was given a well-timed friendship award by China last year ahead of the election.

Marcos appeared to tilt towards China during the election campaign, echoing his father’s relatively early move to recognise China in 1975.  And the China links run deep. The new president met Mao Zedong in 1974 on a warm-up mission with his mother Imelda, who was given a well-timed friendship award by China last year ahead of the election. China presciently opened a consulate in the family’s home province in the northern Philippines in 2007.

The long-established links between the Marcos family and China raise the interesting question of whether Marcos could now play a useful role in the negotiations between the Association of Southeast Asian Nations and China. But while China’s Foreign Minister Wang Yi was the first top diplomat to meet Marcos on 6 July, the president has been warmer towards the United States, referring to a “special relationship” when Secretary of State Antony Blinken visited on 6 August. And he wants to replace Russian helicopters with American ones.

His State of the Nation Address on 25 July about being a “friend to all and enemy of none” while not giving up an inch of Philippine territory was a much more mainstream Southeast Asian approach to diplomacy than that seen from Duterte. And perhaps, like ministerial power sharing, it was a bit more subtle than what has been seen in Australia in the recent past.

Filipino officials are much relieved that Marcos has chosen a career diplomat in Enrique Manalo as his foreign secretary after some variable outsiders in recent times. Last week, in his first meeting with local and foreign reporters, Manalo strongly welcomed the role the country’s free media plays in communicating its national interests to the world. Given the distinctly negative mood towards imported Chinese workers and projects at the grassroots level on the street in the Philippines, that seemed like a message to Beijing.

The evidence so far is that Marcos is set to pursue strategic autonomy between the two great powers in the region.

“The Department of Foreign Affairs is fully prepared to enhance existing relationships as well as cultivating and reaching new ties. And we are also fully prepared to undertake the appropriate diplomatic actions when our interagency processes conclusively verify that our sovereignty has been infringed upon,” Manalo said in quite a measured contrast to the rhetoric of the Duterte years.

It is early days, but the evidence so far is that Marcos is set to pursue strategic autonomy between the two great powers in the region. And while his father has a mostly well-deserved poor reputation for authoritarian rule, striking a balance between the United States and China is one thing that he successfully initiated.

For a country that has long been in the second tier of Canberra’s Asian diplomacy, feelings towards Australia can run deep in the Philippines.

Last week at the Mount Samat shrine to the vicious Pacific War fighting on the Bataan peninsula, a guide wearing the flimsy coconut shell helmet of that era told visiting Australian businesspeople that his compatriots had saved their country by holding off a planned Japanese land invasion.*

The Philippines is now Australia’s fourth largest source of new citizens and there is an air of anticipation that a more stable Marcos Administration will pave the way for an upgrade in the bilateral relationship to a Strategic Partnership to match the other five large Southeast Asian countries.

Ambassador to Australia Hellen De La Vega, who managed to pull off the first foreign business mission to the country under Marcos (and even since Covid hit), told a briefing that everywhere she went in Australia businesses were looking for skilled workers who were readily available in her country.

But more notably, Australia has jumped up the ranks of both approved new investment and tourist arrivals in the Philippines this year. This may be simply a post-Covid breakout, but it has certainly raised the country’s profile with Philippine officials as they bounce back from the pandemic.

Pointing to recent growth forecast upgrades from multilateral banks amid a global slowdown, De La Vega says: “The door to economic recovery is now fully open backed by a better than expected improvement in the economic outlook. The new Administration is clear in its commitment to continued improvement.”

The return of the Marcos family has produced some uneasy reactions in Australia. But the new president won the largest electoral mandate for several decades in one of Asia’s oldest, if interrupted, democracies and a larger one than his elected peers in Indonesia, Malaysia and Thailand. And the Pulse Asia survey suggests that Filipinos think the election was smoother and more credible than the last one with 82 per cent of voters trusting the result.

So, notwithstanding the fact that Marcos senior was responsible for the major episode of democratic backsliding in the Philippines, the Albanese government should not be ignoring the opportunities in the country as it embraces strategic autonomy.

* Greg Earl was a member of the Pacific Business Mission to the Philippines.

The new normal: a close naval encounter in the South China Sea

The Chinese commander’s handling of the situation was less than adept.
Sarah Logan 25 Aug 2017 10:32

This week's include also include the return of Telegram to Indonesia and wedding pix that went viral.
Rachael Buckland 6 Jul 2017 17:07