For any nation, testing space rockets or ballistic missiles is a long and tortuous process. It’s usually littered with a string of failures. The challenge for any program is deciding when a system has been tested enough to be declared operational.

Boffins who watch North Korea’s broad stable of ballistic missiles have sometimes fallen into a cultural trap. North Korea doesn’t run missile programs in the same way as nations with more capital, infrastructure and technology. Testing patterns that would seem essential to a Western program are sometimes condensed or removed.

North Korea has been prolific in launching missile tests in the past year, with varying results. The February launch of a new mobile solid-fuelled intermediate-range missile raised eyebrows with good reason. It’s probably the most practical large missile North Korea has ever developed, and also the most dangerous. The launch of four ballistic missiles towards Japan on Monday morning (Korean time) had not been properly dissected by intelligence officials at the time of writing, but it seems probable that these are more of the same type of missile, judging by their range.

But boffins are still waiting for the other shoe to drop. The DPRK has a lot of practice in sending missiles up. It does not seem to have practiced so much in getting things down.
Technically, gravity doesn’t need to be tested, but the survivability of a warhead is questionable. Ballistic missile launches are essentially sub-orbital space missions. The missile flies above the atmosphere for part of its ballistic arc, and separates a warhead (or several warheads, and possibly decoys). The warhead is protected by a heatshield, like space capsules. It must endure high temperatures and other mechanical stresses as it re-enters the atmosphere. Then, it must be healthy enough to detonate properly.

An advanced missile program would perform many re-entry tests with warheads, and possibly try to recover some of them. Naturally, the test warheads do not explode. Trajectories often see the warheads land in international waters. This can be troublesome. It can invite strategic paparazzi from other nations, who watch everything, or could even steal the goods. Sometimes, snoopers get more than they expected. In 1982, an Australian Orion surveillance plane was stalking a Soviet fleet in the Indian Ocean, reportedly expecting to witness the retrieval of missile warheads. Australia generated a major scoop when the Soviets fished a small robot spaceplane from the waters! A secret Soviet Shuttle precursor was unmasked.

North Korean missile parts (and stages from their satellite launch rockets) have sometimes been retrieved by other nations, and even exhibited like trout trophies. Warheads would certainly be nabbed by nations with superior naval capabilities than North Korea if they landed in open waters. The North Koreans would lose access to the technical data, but other nations would gain it.

Unsurprisingly, North Korea has engaged in unorthodox methods of testing its warheads. It has placed heatshields underneath rocket engines on test stands, and subjected them to the force of their fiery exhaust. Photography released by North Korean state media suggests that these tests have gone well. But these tests do not accurately reflect the conditions of an actual re-entry, which can be even worse. Some Western observers thus claim that North Korea needs better testing, and that should include real re-entries.

Fair comment. It’s not good enough by Western standards, but it’s probably as good as it gets for North Korea which is limited in terms of what it can do for strategic reasons, and by geography. This is hardly the first time that North Korea is known to have cut corners in testing. It saves time, money and lessens strategic risks. But it also poses risks of certifying unreliable systems.

Boffins should accept that North Korea is testing missiles in its own way. It could also be certifying these missiles as operational before other nations would do so. 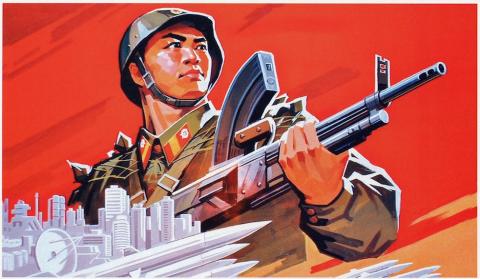 Mutual interests abound in a win-win for the alliance of single-party states.
Elliott Zaagman 28 Jun 2018 15:00