A former High Commissioner to PNG reflects on the “high highs and low lows” of serving in a unique diplomatic role. 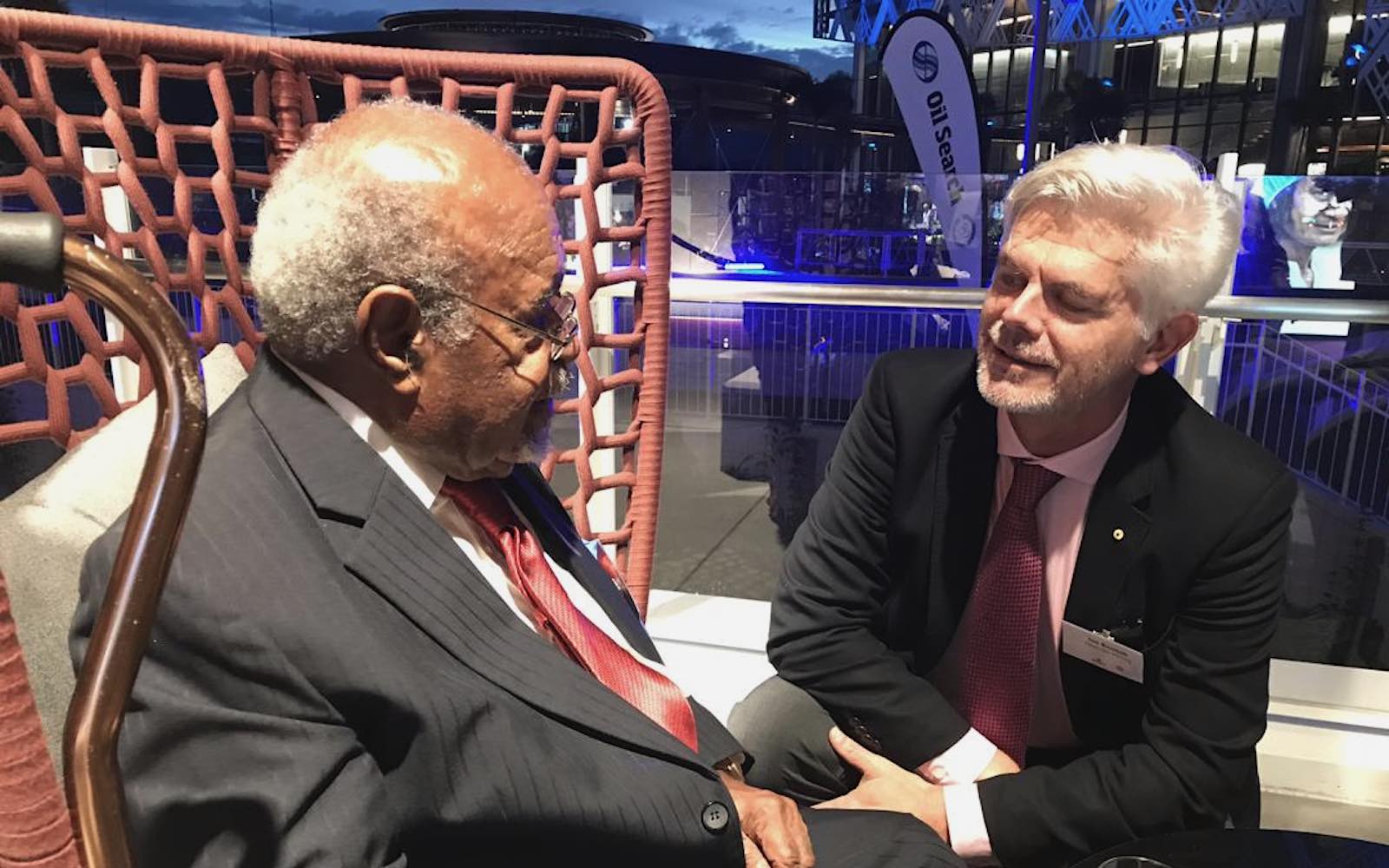 Jon Philp, who commenced as Australian High Commissioner to Papua New Guinea early this month, is the 16th to serve as Australia’s lead diplomatic representative in Port Moresby. I know from experience that the role is unlike any other in the Australian foreign service. The incumbent has the opportunity to work intimately with the national leadership on a wide range of pressing strategic, economic, and development priorities. The Australian head of mission represents a government which is equipped – and prepared – to play a broad-based supportive role in PNG that others are not. For all its concessional finance and public diplomacy, China’s approach is fitful and relatively limited in scope.

From a personal perspective, the role is fascinating and fulfilling, but it also has its frustrations. The country has enormous potential, but continues to grapple with weak administrative capacity, transparency problems, and law and order challenges. My own immediate predecessor in the role, Chris Moraitis, summed it up nicely when I asked him, shortly before I was appointed, how he had found it. “Mate”, he said, shaking his head, “high highs, low lows”. Moraitis made his own strong contribution to the relationship, rebuilding positive links with PNG after a fractious period between Canberra and Port Moresby.

Most of the Australians who have taken on this role have been confronted with some kind of crisis or major challenge that defined their terms as High Commissioner – requiring them to work urgently to exert positive influence at critical moments for the nation. Ultimately these were crises for PNG’s national leaders to manage themselves, but successive Australian envoys helped the sovereign government chart its way through.

For the current High Commissioner, the defining crisis already seems to have taken shape, and it is a significant one. We do not yet know exactly what impact coronavirus will have on our nearest neighbour, but it will undoubtedly exacerbate some existing, very serious challenges.

Covid-19 appears to be the current “clear and present danger” for PNG, and Australia may end up having to step up even further as the effects of the virus become evident. There are likely to be other crises ahead over the next few years, and history tells us that PNG will want to find its own solutions.

The national economy was already facing serious headwinds, with official debt at record levels following years of lower commodity prices and the failure, so far at least, of major potential new projects in the resources sector to materialise. The collapse in the oil price, a direct function of Covid-19’s international impact, has serious implications for the national LNG industry, and demand for other commodities has declined as a result of the global economic retraction. PNG is very vulnerable to the health consequences of Covid-19. Most Papua New Guineans have little or no access to the national health system, which already struggles to manage communicable diseases such as malaria and tuberculosis, along with very high maternal and infant mortality rates. Testing capacity for coronavirus is limited, even with the help being provided by Australia and others, and the country’s real infection rate will probably still be a matter of guesswork after the pandemic has passed.

The Bougainville question also continues to lurk in the background today as a regional security issue. The troubled island region has played an unfortunate, leading role in PNG’s post-independence story, and has generated several of the crises that have drawn in Philp’s predecessors. The first example to spring to mind is David Irvine, who assumed the role of High Commissioner in 1996. By that time, the Bougainville secessionist conflict had been underway for eight years. In March 1997, the government of Prime Minister Julius Chan, impatient and frustrated with the ongoing insurgency, contracted the Sandline mercenary group to help bring it to an end. Irvine found himself at the centre of the Howard Government’s strenuous efforts to convince Chan to drop this plan. The PNG military ended up taking matters into its own hands, detaining the Sandline group and joining with the general population in public protests outside the national parliament in Port Moresby, ultimately pressuring Chan to resign. This was arguably the most dramatic moment in the PNG post-independence story, and it was documented brilliantly by both Mary-Louise O’Callaghan and Sean Dorney in their respective books on the subject.

It is for David to say, not me, but it is clear that he was heavily engaged with the principals throughout, urging calm and rational behaviour in the midst of what was a fluid and potentially dangerous situation.

Bougainville was also a major theme of Nick Warner’s posting to Port Moresby from 1999 to 2003. Warner and his colleagues leveraged the personal relationships they had forged with both Mekere Morauta’s national government and Bougainvillean stakeholders to play a key role in brokering the Bougainville Peace Agreement (BPA) of 2001. It was of course an agreement between the protagonists themselves, but the High Commission’s role is not to be underestimated. The non-binding referendum that was central to this agreement was ultimately conducted only last year, with Bougainvilleans voting overwhelmingly for independence. Actual independence would require ratification by the PNG parliament, a very dim prospect, so the matter remains unresolved for now. But the agreement that Warner and his colleagues helped achieve secured a generation of peace and has allowed more mature dialogue to emerge between the parties over time. Ten years after the signing of the BPA, things had settled sufficiently for me to be the first Australian High Commissioner permitted by insurgent remnants to enter the “no-go zone” around the defunct Panguna copper mine, where the conflict began in 1989.

At some point, most Australian High Commissioners have been faced with the task of providing logistical support to national elections – coordinating the contributions of our defence force, electoral commission, federal police, and civilian corps – while also working to position Australia to work collaboratively with whomever might emerge as the next leader. The PNG version of this important democratic exercise can be unfamiliar to the Western eye. It takes place over a fortnight, involves more than 3000 candidates and almost 10,000 polling places, and requires thousands of small PNG official teams to travel – by helicopter, boat, and foot – to the remotest places on earth to deliver the poll. There can be some violence and irregularities, and in parts of the country, the motto “vote early, vote often” applies. All of this can generate negative coverage in the Australian media, and the Head of Mission can end up having to explain events to a sceptical official audience in Canberra. Based on my observations of the 2012 election, however, I would venture that the end result tends to reflect the overall will of the people. And given the challenges, it is no mean feat that PNG has held an election every five years since independence, without interruption.

“My” crisis played out on the national political stage and was ultimately resolved by the 2012 election. In December 2011, a confused constitutional battle for the prime ministership between Michael Somare, supported by the courts, and Peter O’Neill, supported by parliament, threatened to descend into conflict between armed police factions loyal to the two contenders. These rivals appointed loyalists to key positions, and things quickly reached a point there when PNG had two of everything – Prime Ministers, Defence Force Commanders, Police Commissioners, Speakers of Parliament and even Governors-General. My team and I leaned in, emphasising directly to the protagonists that differences should be resolved politically, and underlining that PNG’s stability and reputation were at stake. We encouraged the Defence Force to stay out of it, and we brokered meetings between the two rival police factions, which helped keep the temperature down. The saga continued for many months, with many twists and turns along the way.

The exercise in which I was involved led to some useful observations. Both sides were keen to maintain contact with Australia to take us through their constitutional arguments, reflecting an understanding that Australia is a shaper of broader international opinion about PNG. But neither was really interested in enlisting our political support. Papua New Guineans are proud of their sovereignty and are no longer inclined to think about Australia as some kind of reserve umpire. Also, the real credit for finding solutions to that crisis rested with Papua New Guineans themselves. The public service, military, and most police elements showed remarkable maturity, refusing to become politicised, despite the significant pressures placed on them. The matter was resolved conclusively by the people of PNG through the 2012 poll.

The newly arrived Head of Mission is well equipped for the role. Philp’s interpersonal approach will work well in PNG. He has previously shown his mettle as Australian Ambassador to Turkey and to Afghanistan, and as head of DFAT’s consular crisis management division. He also has private sector experience, which will help in promoting the substantial trade and investment ties between the countries. His predecessor, Bruce Davis, also a steady and experienced hand, has left the relationship in good shape. Importantly, Philp represents a government that has recognised the importance of PNG and the broader region by stepping up its Pacific engagement.

Covid-19 appears to be the current “clear and present danger” for PNG, and Australia may end up having to step up even further as the effects of the virus become evident. There are likely to be other crises ahead over the next few years, and history tells us that PNG will want to find its own solutions. We too want PNG to stand on its own two feet, but our representation in Port Moresby is well placed to ensure that we remain the first to turn to for advice and support.