Prime Minister, Uruguay’s ambassador is here for your meeting

A sticky question about a prohibited import to Australia might give Anthony Albanese something to chew over. 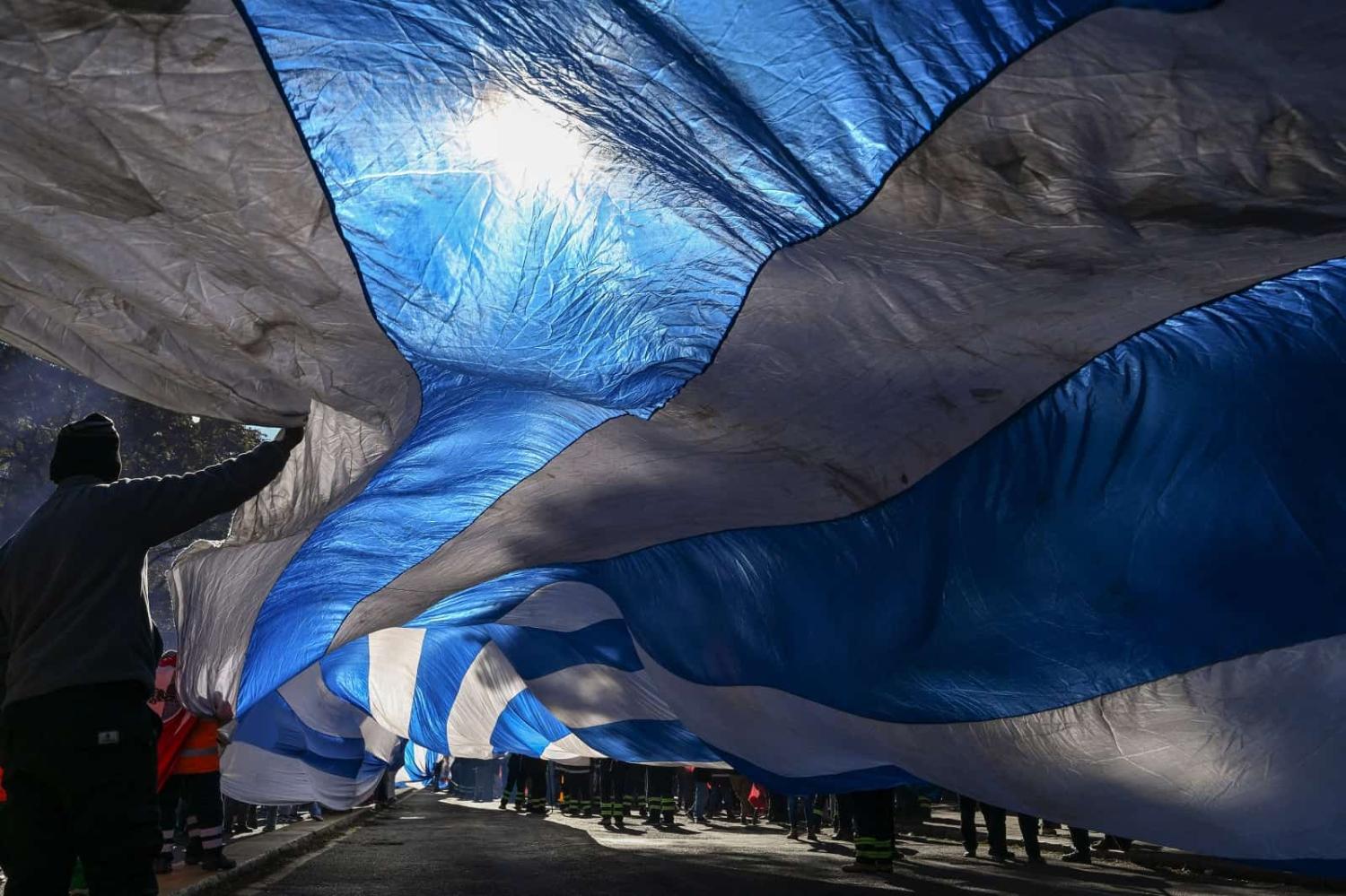 Given the chance, Dianela Pi knows exactly the questions she would pose to Anthony Albanese. “Do you know, Your Excellency, which is the country that is side-by-side with Australia in all multilateral fights?,” she would ask.

Pi is Ambassador for Uruguay, speaking from her office in Canberra for a series of interviews with The Interpreter to highlight bilateral dealings with Australia for nations that otherwise receive little local media attention. The premise: what would a foreign envoy put on the agenda if they secured a 30-minute meeting with the new Prime Minister?

“Do you know which country from outside your neighbourhood has more or less the same international rankings on democracy, transparency, low levels of corruption, ease of doing business?”, Pi would also ask. Which country, aside perhaps from New Zealand, most supports Australia “all the way” in opening markets to meat and agricultural products? The country that was alongside in the fight Australia had against big tobacco to introduce plain packaging and graphic health warnings on cigarette packets? And also backed the adoption of a “responsibility to protect”, or R2P – “a very Australian concept at the multilateral level”?

“This is a huge country, a very diverse one … you really need to move through the country to understand people, to understand things that are happening.”

So, this hypothetical meeting with the PM amounts to the slightly awkward introduction of a country that has been a long-time friend to Australia.

“We have been sharing the same fights, looking for the same objectives,” Pi tells me.

My confession is that I know next to nothing about Uruguay. That a country of 3.5 million produces enough food to feed more than 30 million. That Uruguayan military and civilian observers served during the international mission in 1999 leading to independence in East Timor, with a group grateful to be evacuated to Darwin on an overcrowded RAAF transport at the height of the violence. That naming rights for the final “GATT round”, which led to the eventual establishment of the World Trade Organisation, was a signal of the country’s abiding support for free trade. Or that Uruguay ranks 13 on the latest Economist Democracy Index, just four places behind Australia. (Okay, yes, I did know about the soccer.)

“We don’t take it for granted that we’re always going to be visible all around the world,” Pi says. “We’re a very small country, between two big countries. We have more animals than people in Uruguay. So, it’s on us also to give visibility to our country and to make sure that we are known.” 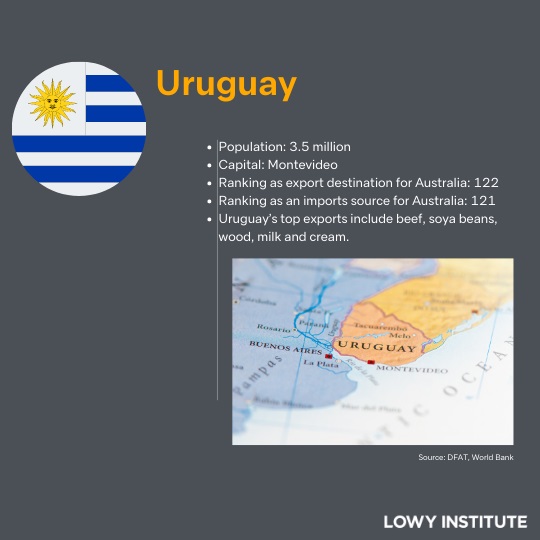 Like any good ambassador, Pi sees promoting her country as a top priority. But that job was made so much harder by Covid. She arrived in Canberra in late 2020, only to soon be stuck in a lockdown with domestic border controls. Despite 18 months in the job, she feels it took until this year to properly get started. “This is a huge country, a very diverse one … you really need to move through the country to understand people, to understand things that are happening.”

But the Covid experience did provide Pi with a special thank you from the Governor-General on arrival. Early in the pandemic, thousands of Australians had been stranded on cruise ships, many off the coast of Latin America. “All the ports of Latin America were rejecting the Australian cruisers. Uruguay opened the doors,” Pi says. The most famous case involved the Greg Mortimer, an Australian-owned vessel that had sailed to Antarctica in March 2020, only for more than half the 217 passengers and crew on board to test positive. Uruguay opened “a sanitised corridor” to disembark the passengers and fly 97 Australians home. 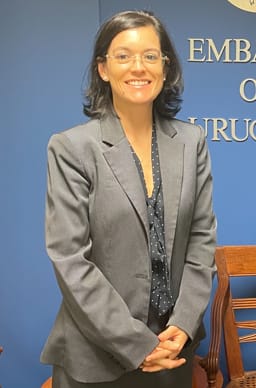 “Uruguay, it was a kind of fortress [at the time]. We had a couple of cases of Covid, but it was very well managed,” says Pi, pictured. “So, for us to allow people from abroad to enter our country, it was a risk because we could have been bringing Covid in a bigger way. And it was a success not only because Covid was not extended in our country, we extended the solidarity hand to our Australian friends.”

Uruguay’s economic profile certainly has a familiar look, with GDP returning to pre-pandemic levels in late 2021 and expected to grow with strong agricultural exports. Pi makes the point that the cooperation she hopes to foster with Australia is not that of a developing country asking for financial assistance or capacity building. “I have all that … I can learn, and I can receive something from Australia, but I also can give Australia something,” Pi says. She cites energy transition as an example. “Uruguay already did that – 97 or 98 per cent of our sources of energy are renewable sources.” That experience produced valuable lessons about water management and emerging technology with green hydrogen. “We already know that we can produce much more than we will need.”

Speaking of sharing, Pi also has a particular request for the PM – and she promises the result will be delicious. Australia presently bans commercial imports of dulce de leche, a gooey Uruguayan caramel that contains milk, out of precaution to guard against the danger of introducing foot and mouth disease for cattle.

“The way you produce dulce de leche takes the milk to very high temperatures and very low temperatures, so you kill everything that is there … So, technically there’s no risk for human consumption at all, we have been eating dulce de leche since our beginnings. Nothing has happened there. And really, it’s not a product that is going to compete with any Australian one.”

But the onus is also upon Uruguay, Pi says, to raise the country’s profile. That’s why Uruguay maintains an embassy in Australia and next year will mark 75 years since a note verbale requesting the establishment of diplomatic ties. “We are a country that has been looking always to engage with the international community,” Pi says. “We have opened many embassies and consulates abroad with this idea that Uruguay had to gain visibility, and you gain visibility being present.”

“And I think that we should have a better relationship with Australia in terms of cooperation – to see that despite our differences in terms of size, in terms of demographics, that we can see each other as friends and cooperative partners, and not as competitors.”

In Syria or Australia, childbearing or weapons-wielding, everyone’s contribution to violent jihad can be different.