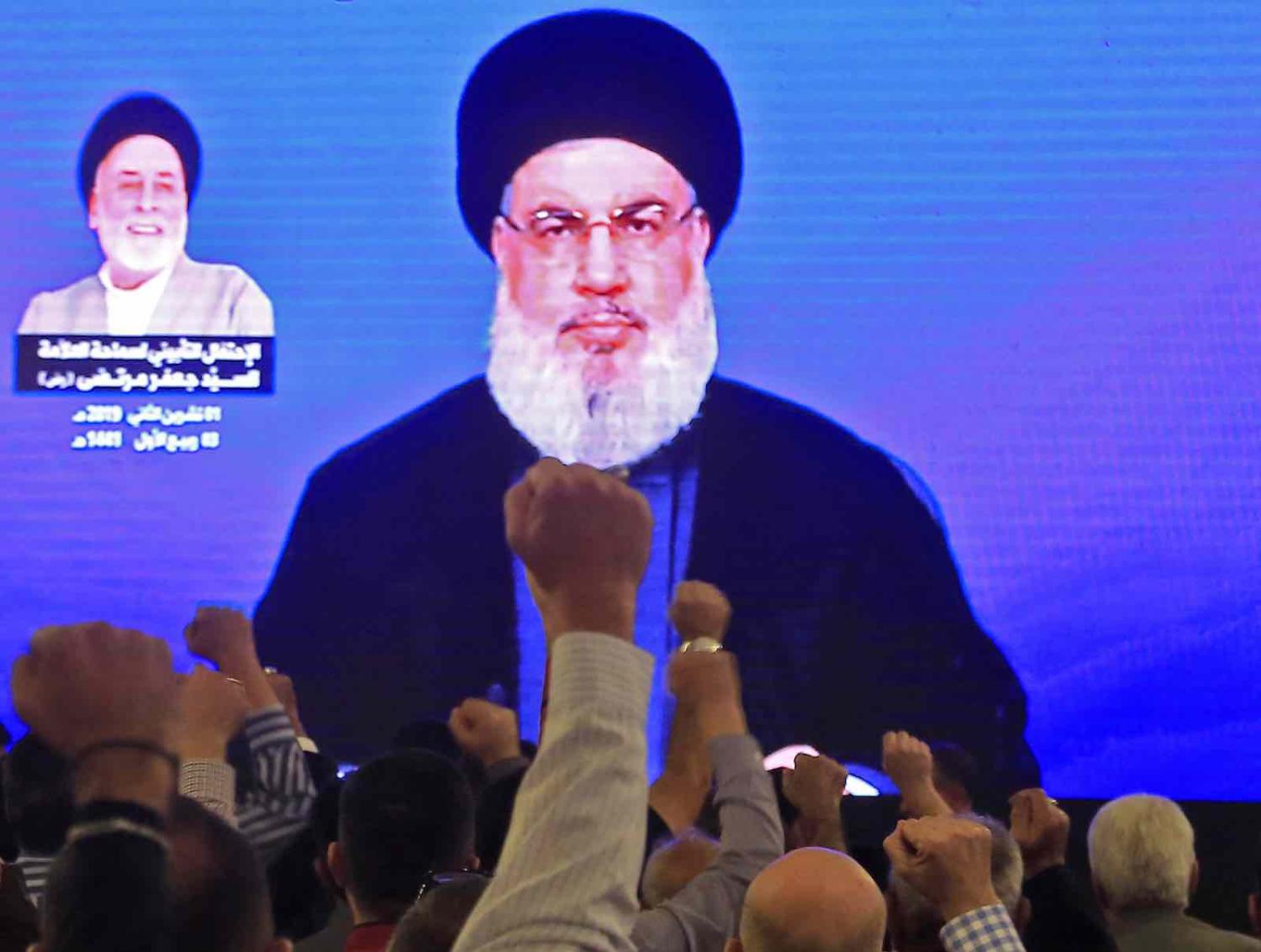 Supporters of Hassan Nasrallah, the head of Lebanon’s militant Hezbollah movement, watch him speak through a giant screen at a mosque in Beirut’s southern suburbs on 1 November (Photo: AFP via Getty Images)
Published 6 Nov 2019     Follow @laurenwillgo

After two weeks of unprecedented protests in Lebanon, the Western- and Saudi-backed Prime Minister Saad Hariri bowed to pressure and resigned on Tuesday. The President, Michel Aoun – a Christian – now says he is seeking to abolish Lebanon’s confessional government and replace it with a coalition of technocrats.

Demonstrators in in the country are fed up with the inept and corrupt sectarian system that has allowed various religiously aligned leaders to exploit patronage networks at the expense of the provision of basic public services. But developments in the last week have exposed the fragility of the protest movement’s rare and unified anti-sectarian agenda. The movement now risks falling victim to the very divides it is seeking to overcome.

Lebanon is awash with guns and it only takes a handful of diehard armed loyalists to disrupt the unity these protests represent.

Lebanese citizens of all faiths have filled the streets, in what has been hailed as a triumph over the sectarianism that plagues the country. They are calling for the downfall of the regime – an emotive cry echoing the revolutionary chants of other ill-fated Arab Spring dictatorships.

But unlike other authoritarian regimes, Lebanon is a multi-polar dictatorship. Leaders are appointed according to confession to form a coalition originally designed as a power-sharing agreement as part of the Taif accord that ended the 1975–1990 civil war. The system assigns the post of President to a Maronite Christian, Prime Minister to a Sunni Muslim, and Speaker of the House to a Shia Muslim. Devised as a means to guarantee equal political representation, it has given rise to rampant clientelism, which has allowed leaders to exploit their loyalist constituencies through allies at a business and local municipal level for their own political ends.

Unsurprisingly, the coalition of the old guard are unlikely to all simultaneously resign. Now, the fear is that they will resort to what they always do – unleash the sectarian card by mobilising their bases. Whether the Lebanese people are able to resist these traps remains to be seen, but the emergence of the kind of identity politics within the protest movement is a dangerous development that could derail the whole project.

That’s exactly what happened last week, after Iranian-backed Shiite militant party Hezbollah’s leader Hassan Nasrallah positioned his party firmly against the protest movement, stating his opposition to the formation of a new government and warning that the chaos they created would be exploited by Israel and the West. These emotive remarks framed the protests as the enemy of the resistance movement, something its supporters consider the pillar of their proud national and religious identity.

Iran, called on an even higher authority to warn against the protest movement ­– God himself. Supreme Leader Ayatollah Khamenei warned the protests were stoked by Saudi Arabian and Western intelligence services, invoking the notion of velayet-e faqih, or Islamic jurisprudence, to justify the anti-protest position.

And so, in response, Hezbollah supporters and those of the affiliated Shiite party Amal resorted to beating up protesters and tearing down protest tents and abusing Western media. The mood on the street, as one observer put it, “is decidedly us and them now.”

Hezbollah backs the Maronite President Michel Aoun, and his Free Patriotic movement. On Sunday, factional counter demonstrations were held in support of Aoun. His largely Christian base were quoted as saying only he was above the corruption plaguing the country.

The Western-backed Hariri government provided a degree of cover to Hezbollah, which leant its support to his cabinet in exchange keeping Iranian allies in key posts. As such, Iran would like to maintain the status quo, and is wary of any arrangement that would see its influence diluted. On the other hand, any new accord that sees Hezbollah increase its influence will fail to unlock billions of dollars in Western aid desperately needed to alleviate the current economic crisis and satisfy angry protesters.

What now? It’s too late to simply ask the demonstrators to pack it in and go home. Hariri, still in place as caretaker Prime Minister, may end up being given the job by Aoun of forming a new government which will simply be a matter of negotiating with the same old cronies now jostling for position, in a new incantation of the same crisis that left Lebanon without a government for months previously. Even a watered-down version of the current cabinet will not satisfy the protesters and their cries of “all means all of them”.

A technocratic secular government may sound like a good idea, but it would require abolishing the entire system and rewriting the constitution. Iran has clearly indicated its opposition to such a plan and its willingness to act on that opposition. Even if it had full factional support, it seems unlikely the street will not hold for the time it would take to do so.

At any rate, who would lead such a coalition? An atheist? The protest movement lacks any leader or even agreed-upon aims. When push comes to shove, it’s more likely, as usual, the Lebanese people will want to secure leaders that represent their interest, and more often than not, these boil down to religious identities and old grievances.

Unfortunately, in the short term, the most likely scenario is that, in true Lebanese style, a bomb or an assassination will ignite the sectarian undercurrents. Lebanon’s sectarian kleptocratic leaders will be all too willing to exploit such an incident by claiming they alone are the protectors of those threatened with violence. Lebanon is awash with guns and it only takes a handful of die-hard armed loyalists to disrupt the unity these protests represent.

This is something Western donors should keep in mind when holding back aid until a reformed government to their liking is formed – unless, of course, it’s chaos they in fact desire as a pretext for something bigger to come.

A memoir on collective historical baggage has much to teach about the evolution and maturation of both nations.
Phyu Phyu Oo 11 Feb 2021 14:00