The lyrics criticise the #metoo movement and question why women aren’t required to enlist in the military.

Sister, why mad? Blame system, not men. I am feminist.

A song released recently by Korean rapper San E has touched a nerve in South Korea. The controversial song “Feminist” critiques Korea’s dating culture, beauty standards and the gender pay gap, which he calls a “f---ing fake fact”. The song has prompted a response from others in the South Korean hip-hop community, with rappers releasing diss-tracks and breaking down San E’s arguments.

“What you want is for women to serve in the military,” said female artist SLEEQ, “What I want is for men not to kill women.”

Another rapper, Jerry K, also released a critique of the song, compelling San E to respond with a diss track of his own, “6.9 cm”, embroiling himself further in conflict. At a concert on 2 December, he lashed out at the audience, calling radical feminist groups in Korea “mentally sick” and the “evils of society”. He later released another song, “Oong Ang Oong”, that addressed the “boos and jeers” he faced at the concert and in which he continued to rant against radical feminism.

San E’s music agency has denied having any knowledge of "Feminist" before its release and has formally apologised for the rapper’s behaviour at the concert.

In the wake of the controversy, San E had to cancel an event appearance. He also posted a lengthy apology and line-by-line explanation of the song on Instagram to say that “Feminist” was portraying the views of a narrator, not himself.

“The narrator in the song is not me,” he said. “I enjoy books and movies with this meta-perspective and I thought I had set up my song so that people would understand what I was doing. It seems that my set up was weak.”

Narrator or not, his lyrics have re-focused the spotlight on gender issues in Korea.

The gender pay gap in Korea is 37.2%, the highest among OECD countries and way above the OECD average of 14.3%. Cultural and societal expectations in the workplace also hold back women from advancing in their careers. Despite having a higher level of education than their male counterparts, women are less likely to hold leadership positions. If a woman becomes a mother she is less likely to re-enter the workforce.

San E’s lyrics ignore this information, claiming that men and women are equal and lamenting, “Why do I pay for dates? When we’re buying a house after marriage let’s go half and half. I’m no f---ing prince.” But, as his critics have pointed out, women can’t equally split the bill if they aren’t earning an equal wage.

Unfortunately, abuse and violence in relationships is also something South Korean women disproportionately contend with. According to a report released this year by the Seoul Metropolitan Government, 88.5% of women living in Seoul said they had been psychologically or physically abused by their boyfriends or husbands. Of these women, 24.5% said dating involved psychological abuse, with 22% saying threats were involved and 10.7% reporting physical violence - 37.4% of the women who experienced violence had to be hospitalised.

San E’s character says that, unlike the men on the news, he is not dangerous and that women should trust him, echoing the #notallmen sentiment often expressed on the internet.

Last year, a viral video of a man assaulting his ex-girlfriend in an alley prompted police to launch a 100-day action plan to reduce violence against women. San E’s character acknowledges this “dating violence” yet, despite his problematic ideas about women in the song, claims that he’s “not one of those losers in the news.”

He also references a shocking incident that happened at “Gangnam Station at night”, in which a woman was stabbed to death by a stranger in the bathroom. The attacker struck her randomly, saying he did it “because women have always ignored me”. The event ignited public outrage, with the train station becoming the site for a makeshift memorial. San E’s character says that, unlike the men on the news, he is not dangerous and that women should trust him, echoing the #notallmen sentiment often expressed on the internet.

The narrator of the song also critiques the appearance of “woke progressive” women, saying, “childishly they don’t wear bras, don’t shave their armpits, cut their hair short...I like your hair long, don’t change.”

The Free Corset Movement has been growing among Korean feminists protesting Korea's notoriously high beauty standards, with women following complicated skin-care and makeup routines. Plastic surgery is seen as a normal part of life, with parents sometimes gifting their children with cosmetic procedures as a graduation present. The women in this movement are trying to break the mould by going out without makeup, trying shorter hairstyles, and rejecting what society expects of their appearance.

San E’s character appears ignorant of these societal pressures: “When did we ever say you had to be pretty?”.

Whether San E respects women is up for debate. But whatever his intentions when creating the song, his lyrics have prompted more people around Korea and the music community to discuss and reflect on their attitudes towards gender and equality. 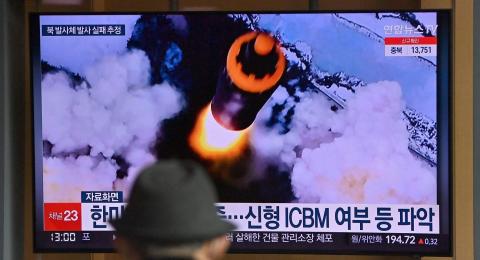 If – big if – this missile is real, America cannot guarantee its homeland security in a war with North Korea.
Danielle Cave 10 Mar 2017 10:59

The Asia Pacific is the most dynamic digital landscape in the world.
André Leslie 14 Apr 2021 06:00

Pyongyang’s decision to skip the Tokyo games is part of a broader retreat back to the international wilderness.