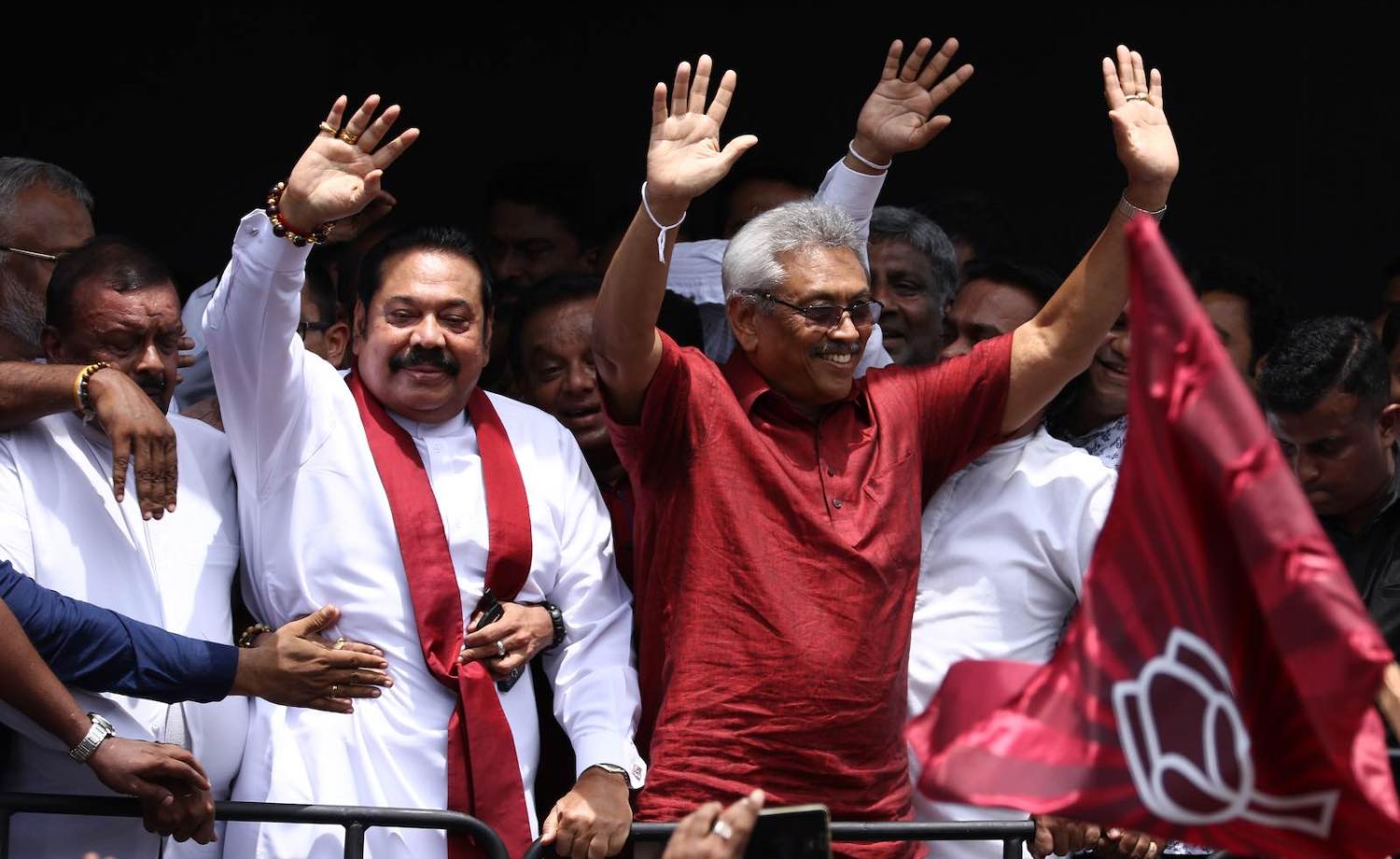 As Sri Lankans head to the polls to elect a new president on 16 November, Gotabaya Rajapaksa stands as the widely acknowledged front runner. As defence secretary during his brother Mahinda Rajapaksa’s decade-long presidency ending in 2015, he was a leading figure in a government that many minority Tamils and Muslims, as well as opposition politicians, blame for terrible political violence and repression. During that period, dozens of journalists were killed or forced into exile, prominent Tamil politicians were murdered, and thousands of Sri Lankans were forcibly disappeared; no one has since been held accountable for those crimes. Gotabaya is expected to name his brother prime minister, as Mahinda is constitutionally term-limited from seeking the presidency. The last Rajapaksa administration became increasingly authoritarian over its tenure, and the family’s political reprise would likely bring more of the same.

Gotabaya’s main challenger is Sajith Premadasa, the standard bearer for the United National Party (UNP), headed by current prime minister Ranil Wickremesinghe. Premadasa is currently Cabinet Minister for Housing, Construction and Cultural Affairs. Although Premadasa is more popular with average voters than the aloof prime minister, private polling, the largely pro-Rajapaksa media, and past voting patterns all suggest that Premadasa is the underdog. Although widely seen as having run a strong campaign so far, Premadasa is also competing against smaller party candidates who could take a significant block of the anti-Rajapaksa vote.

Almost certainly, reconciliation and accountability for atrocities and human rights violations will be losers should Gotabaya win. Under the Rajapaksas’ watch, thousands of Tamils disappeared in the final years of war.

Gotabaya Rajapaksa is campaigning on promises of security and order that appeal to many ethnic majority Sinhalese, especially in the wake of ISIS-inspired bombings last Easter that left more than 250 dead and at least 500 wounded. He announced his candidacy within days of those attacks, seizing the opportunity to position himself as the nation’s protector. Promising to eliminate all forms of terrorism, he has argued (with little evidence) that the government’s arrest of key intelligence operatives based on allegations of abductions and murders weakened security and paved the way for the Easter attacks.

Gotabaya has emphasised his central role as defence secretary in the 2009 military victory over the Tamil Tigers, a militant separatist organisation that fought for a Tamil homeland in the country’s north-east for more than 30 years. Promising voters technocratic, military-style governance, led by professionals rather than politicians, Gotabaya also draws on middle class voters’ appreciation of the redevelopment projects he spearheaded as head of the Urban Development Agency and the general impression that he “gets things done”, albeit ruthlessly at times. Gotabaya has pledged that his government will instil “discipline”, and argued forcefully that love of country is more important than individual rights and that security is paramount.

The prospect of a new Rajapaksa presidency has heightened ethnic tensions and raised fears among minorities and democratic activists. They worry electing Gotabaya, a strong Sinhala nationalist, would deepen already serious divides among the country’s ethnic communities and threaten its recent modest democratic gains. Sri Lanka’s Muslims are among those most fearful of a Gotabaya presidency. They worry about his support for militant Buddhist groups that attacked Muslims with impunity in 2013 and 2014, when Gotabaya was in charge of the police and army. Evidence that politicians from the Rajapaksas’ Sri Lanka Podujana Peramuna party (SLPP) were involved in anti-Muslim violence in March 2018 and May 2019 has strengthened these fears, as has the backing of prominent nationalist monks promoting anti-Muslim attitudes for Gotabaya’s candidacy.

Gotabaya has always denied any links with militant Buddhists, and along with others in the SLPP has courted Muslim voters. Although some Muslim businessmen back Gotabaya, hoping for business-friendly governance, most Muslims are expected to maintain their traditional support for the UNP. Many worry, however, that this will make their community vulnerable to retribution if Gotabaya wins. In a widely circulated video, Gotabaya’s personal lawyer and a prominent Muslim member of the SLPP articulated the bind in which many Muslims find themselves: telling his Muslim audience that Gotabaya is certain to win, he then asked them how they were likely to fare if Muslims were not seen to have supported him. When one audience member chuckles nervously and says they would get a “massive thrashing”, the lawyer laughs along, agrees, and says Muslims would be wise to support Gotabaya to avoid increased harassment and even violent retribution. Smaller pro-Rajapaksa Tamil parties in the multi-ethnic north and east have appealed to Tamils to vote for Gotabaya in order to protect themselves against the perceived threat of Muslim extremism and economic power.

For Tamils especially, but also Sinhalese and Muslim victims, being asked to forget is both painful and impossible. The current government’s failure to investigate or press the army to provide answers about the disappeared has kept families’ wounds fresh.

Almost certainly, reconciliation and accountability for atrocities and human rights violations will be losers should Gotabaya win. Under the Rajapaksas’ watch, thousands of Tamils disappeared in the final years of war – including hundreds who surrendered to the army on the last day of fighting in May 2009 and were never seen again. When asked at a 15 October press conference about their fate and how he would respond to the continued appeals of their families for the truth about what happened to them, Gotabaya denied anyone was unaccounted for after surrendering. When pressed, Gotabaya asserted there was no point in looking to the past and said he was running to be “the president of the future Sri Lanka”. At the same press conference, Gotabaya announced he would not recognise or honour commitments on post-war accountability and reconciliation the current government made to the United Nations Human Rights Council in 2015.

For Tamils especially, but also Sinhalese and Muslim victims, being asked to forget is both painful and impossible. The current government’s failure to investigate or press the army to provide answers about the disappeared has kept families’ wounds fresh. The Office of Missing Persons, established in 2018 to fulfil a government’s pledge to the UN, is still struggling to become effective. The police and army, whose assistance is necessary to establish the truth, will likely continue to resist the Office’s work under any scenario. Many expect Gotabaya will formally dismantle the Office of Missing Persons should he be elected.

The last five years represent a lost opportunity to help Sri Lanka recover from the war that ended a decade ago. The broad, multi-ethnic and multiparty coalition that came to power in presidential and parliamentary elections in 2015 promised to strengthen the rule of law and tackle the culture of impunity engendered by the nation’s long history of political violence. They restored a degree of independence to the police and judiciary, and journalists as well as civil society activists have made the most of their increased freedom. Chances for more lasting reforms, however, and for prosecutions of the many high-profile cases of corruption, murder, and disappearances during the Rajapaksa period, were frittered away in partisan battles between President Maithripala Sirisena and PM Wickremesinghe. The government’s failure to make decisive changes has left Sri Lanka’s citizens – and its still-fragile institutions – at risk.

A Premadasa win is no guarantee of turning the page on Sri Lanka’s violent past. His election manifesto contains some positive proposals – including creation of an independent prosecutor – but his career has not suggested deep commitment to accountability or reconciliation. His popularity derives from his single-minded focus on the many housing developments his ministry has built and the sense that he cares about average and poor Sri Lankans. During the campaign, he has attempted to match Gotabaya with vows to “eradicate terrorism” and impose the death penalty on drug dealers. Despite this posture and widespread disappointment with the UNP-led government among minority voters and democratic activists, many of them see a Premadasa victory as essential to keeping open Sri Lanka’s fragile space for dissent and pluralism. With the backing of the main Tamil and Muslim parties, Premadasa has also challenged Gotabaya on the crimes and abuses committed during the Rajapaksa years, warning voters of the risks a new Rajapaksa government would carry.

Whether Gotabaya or Premadasa wins this next election, building the independent institutions needed to end impunity will be essential to ensuring lasting peace in Sri Lanka. For external supporters of human rights and democratic freedoms in Sri Lanka, their main leverage will be found in Sri Lanka’s need for help from the International Monetary Fund and other multilateral and bilateral agencies with its struggling economy and dangerously high foreign debt. Vulnerable human rights defenders and opposition politicians will also need political support from outside the country as they continue their quest for truth and justice for past atrocities. 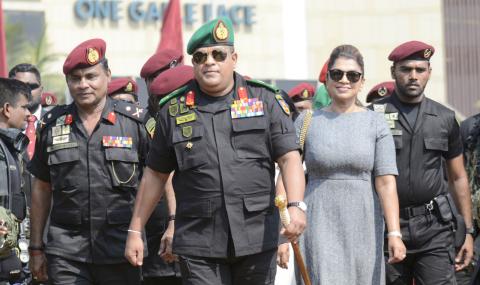 Previous Article
A motion towards justice in Myanmar
Next Article
Chart of the week: Australia’s “fear and greed” with China

When it comes to Germany and Russia, pragmatic economic interests run up against a philosophical commitment to human rights and a liberal European order, and adherence to the positions of NATO and the EU.
David Brewster 13 Jun 2019 11:00

Maybe Australia should donate a warship to Sri Lanka

Far from surplus or scrap, the navy’s last Adelaide Class frigates are strategic assets that can still serve a mission.
Erin Hurley 12 Aug 2020 13:00