Supporting the Lebanese Armed Forces and the Lebanese government does mean tacitly accepting the presence of Hizbullah, a designated terrorist group in Europe and the US. 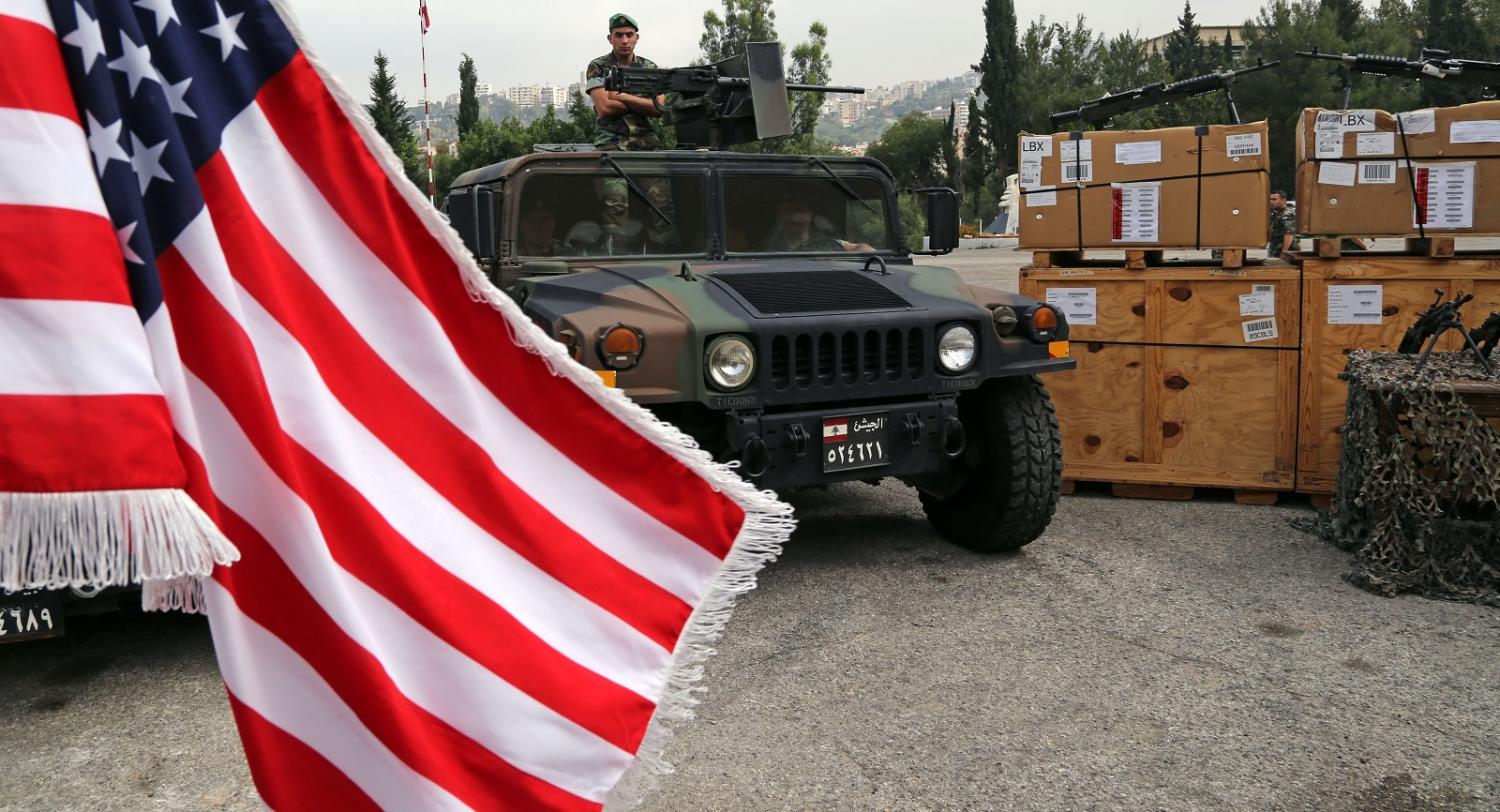 A Lebanese soldier near heavy machine guns distributed by the US Army in Beirut on 5 May. (Photo: Ratib Al Safadi/Getty Images)
Published 31 Jul 2017

It’s hard to know at times if Trump has any Middle East specialists on his speech writing team or whether he’s just fired them all. His comments after a recent meeting with the Prime Minister of Lebanon, Rafiq Hariri, have become a source of mirth here in Lebanon after he stated: 'Lebanon is on the front lines in the fight against ISIS, al-Qaeda and Hezbollah'. The fact that Hizbullah currently dominates the Lebanese government surely must have made Hariri wince, even if imperceptibly. Equally troublesome at the local level in Lebanon was Trump’s conflation of Hizbullah with the violent extremism of ISIS and Al-Qaeda.

On the one hand, Trump’s support for the Lebanese Armed Forces is a Good Thing; it is the most stable and respected institution in Lebanon. The US has maintained a policy of supporting the Lebanese Armed Forces for decades (US$1 billion since 2006) and as I have noted previously, it should continue to do so. Increased intelligence sharing in Lebanon has greatly improved the Lebanese Armed Forces’ ability to prevent terror attacks on Lebanese soil, and it has demonstrated on many occasions that it is prepared to take on its opponents irrespective of any imbalance in material capabilities.

I ran into some material evidence of US support for the Lebanese Army recently in an upmarket wine bar in east Beirut. I shared a brief conversation with a group of Americans that ended oddly when they refused to tell me which arm of the US military or government they worked for. But they did tell me they were in Beirut on express orders from President Trump to assist the Lebanese Armed Forces and that he was highly committed to helping Lebanon.

Trump’s statement after the Hariri meeting, while betraying a considerable degree of ignorance, did also highlight the inherent tension in western policy towards Lebanon. On the one hand, the West has many reasons for wanting to keep Lebanon onside: Lebanon’s location on the Mediterranean makes it an important geo-strategic ally; it is one of the few Middle Eastern states that supports pluralism in religious beliefs with a large Christian population; and it currently acts as a buffer between the Mediterranean and extremists currently operating in Syria.  Not to mention it is housing upwards of one million Syrian refugees (and that is just the official number).

But supporting the Lebanese Armed Forces and the Lebanese government also means tacitly accepting the presence of Hizbullah, a designated terrorist group both in Europe and the US. This is because Hizbullah is currently the dominant political force in Lebanon, allied with both the other major Shi’ite party AMAL here and a Christian party, the Free Patriotic Movement (FPM). The current President of Lebanon, Michel Aoun is the leader of the FPM and Hizbullah’s preferred candidate.

Hizbullah still enjoys significant support in Lebanon, particularly in the south of the country. The Lebanese Armed Forces needs to retain domestic support as a non-sectarian institution, so will not challenge Hizbullah militarily and, as part of government, it also needs Hizbullah support for budget allocations.

The EU has tried on many occasions to separate out Hizbullah’s political wing from its military arm, much the way the UK did with Sinn Fein and the IRA. But the leader of Hizbullah, Hassan Nasrallah has steadfastly refused to participate in this distinction, stating on many occasions that Hizbullah’s armed and political wings are one and the same. The other conundrum for the West is that, in Lebanon at least, Hizbullah has at times been regarded as an effective deterrent to ISIS, in particular in 2014, when the power commanded by ISIS appeared to be at its height.

In the south of the country, in the area south of the Litani River, EU engagement with Hizbullah is extremely complicated. European troops comprise 32% of the United Nations Interim Force in Lebanon (UNIFIL) that monitors Lebanon’s border with Israel.  Any aggressive foreign policy from countries such as Spain, Italy, France and Ireland aimed at culling Hizbullah could lead to retribution on the ground in the form of local attacks on troop contingents from those countries. This tension was most clearly highlighted when the EU placed Hizbullah on its list of designated terrorist organisations in 2013.

The challenge of dealing with Lebanon is compounded by the fact that within Lebanon there is a significant slice of the population that opposes Hizbullah, of which Hariri’s Future Movement is a part. This faction would like Hizbullah to hand over its weapons to the Lebanese Armed Forces and become a purely political movement. It views Hizbullah as a threat to the Lebanese state; responsible for inviting conflict with Israel and violent extremism from other terrorist organisations. This is why international engagement with the pro-Western coalition known as the March 14th Alliance (comprised of the Future Movement and two Christian Parties, the Lebanese Forces and the Kataeb Party) inevitably leads to public condemnation of Hizballah, whilst on the ground its presence is tacitly accepted.

Despite these contradictions, capacity building the Lebanese Armed Forces should reduce the need for Hizbullah to retain its weapons, and so the West is right to continue to provide assistance. Trump’s confused comments last week ironically highlighted the precarious political balancing act required.

Previous Article
Why Moriarty is a good choice for Defence Secretary
Next Article
Is the relationship between growth and inflation shifting?

In PNG’s history, the death penalty has now been abolished twice. The country can take a step to see it never returns.
Catherine Highet, Serah Sipani , Trudi Egi 27 Oct 2022 07:30

A unique Arabica crop has the potential to improve women’s financial inclusion and climate change all at once.
Sheryn Lee 17 Nov 2017 14:33

The 'inescapable clash of norms' allows us to contemplate the new balance of power in Asia.