Japan has quietly, and successfully, been building ties with the Philippines in a way that could calm a volatile region. 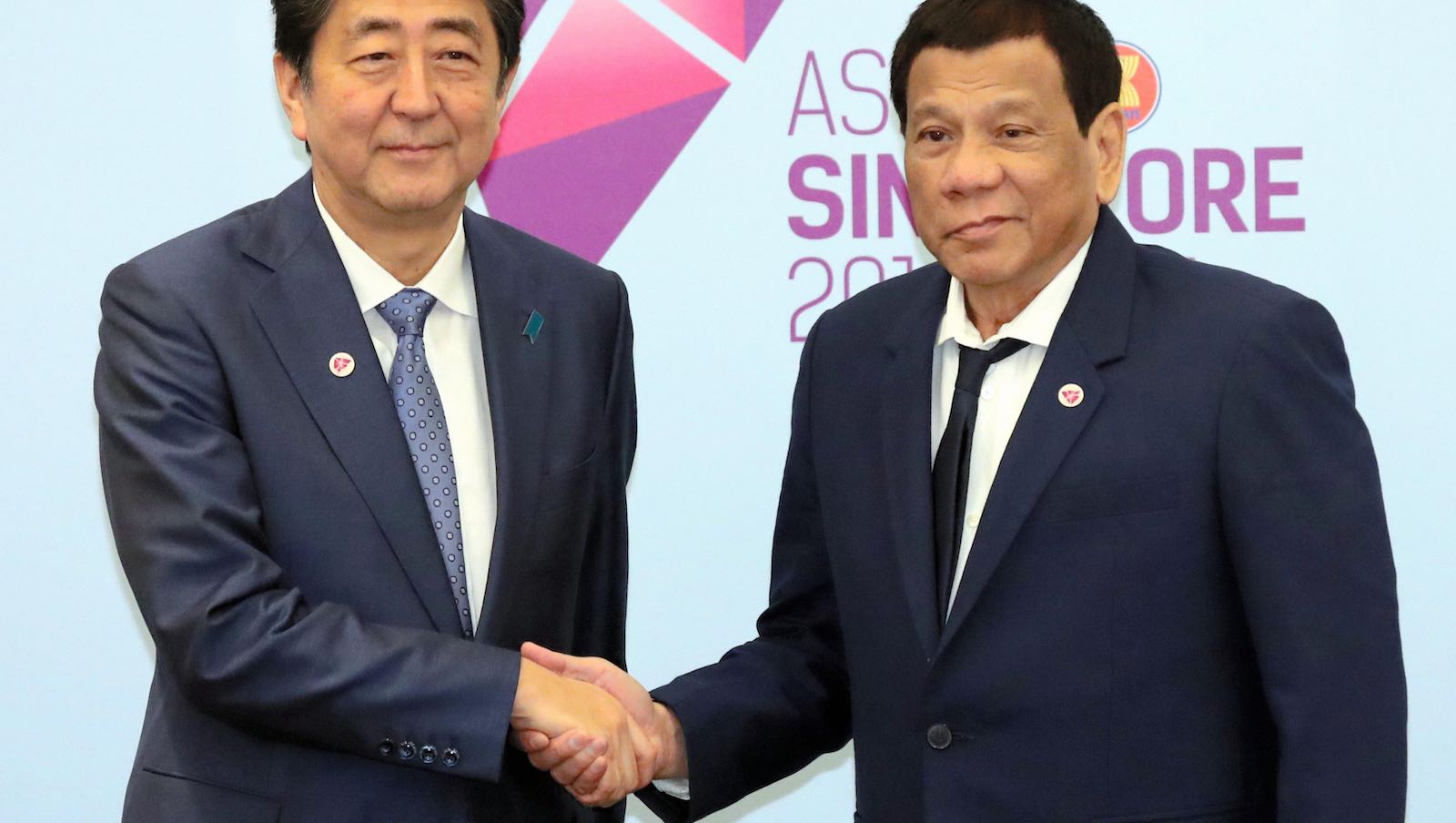 As the Philippines gears up for 13 May midterm elections, debate over Manila’s strategic alignment between China and the US has been one area of serious contestation. Opponents of President Rodrigo Duterte have criticised his government’s decision to sign a memorandum of understanding with Beijing over joint oil and gas exploration in the South China Sea. At the same time, a bizarre incident involving a Chinese student’s misjudged decision to throw a tofu-based snack at a police officer in Manila has led to renewed questions over the benefits of a recent influx of Chinese visitors and investment.

Doubts also exist over the future of the Philippines’ ties with Washington. Defence Secretary Delfin Lorenzana recently remarked that an upcoming review of the two countries’ Mutual Defence Treaty (MDT) is necessary because it may “no longer be needed”. US Secretary of State Mike Pompeo travelled to Manila on 1 March, going some way to clear up long-standing uncertainty surrounding the US commitment on the MDT. Addressing a joint press conference with Pompeo, Philippine Foreign Secretary Teodoro Locsin Jr. signalled his own opposition to an MDT review, claiming that, when it comes to the MDT:

In vagueness lies the best deterrence.

Against this backdrop of enduring uncertainty about regional great power competition, the Duterte administration has recently moved towards closer ties with Tokyo ­– as a stabilising force and as an alternative source of new investment.

The Duterte administration has recently moved towards closer ties with Tokyo – as a stabilising force and as an alternative source of new investment.

During a visit to Davao City in February, Japanese Foreign Minister Taro Kono attended the opening of a new Japanese consulate general, and agreed with Duterte that the Japan-Philippines’ relationship has “entered a golden age of strategic partnership”. Reflecting these closer ties, it was announced that Japan would be contributing up to US$ 202 million in loans to infrastructure projects in Mindanao, in support of the fragile peace process in the Philippines’ southernmost region.

This development came only weeks after Japan signed a deal agreeing to provide around US $1.54 billion in concessionary loans as part of plans to upgrade the Philippines’ rail system. Closer ties have also been reflected in the defence realm, with a Japanese destroyer docking in Manila on 29 January for a three-day visit, amid reports that future joint naval exercises are being considered.

Manila and Tokyo’s post-war diplomacy has seen highs and lows in more than 60 years of diplomatic relations. Despite historical hiccups such as the legality of the 2006 Japan-Philippines Economic Partnership Agreement (JPEPA) and disagreement over the need for a wartime apology and resolution of the comfort women issue, there has been a surge of high-level engagements between Manila and Tokyo since Duterte’s election. Prime Minister Shinzo Abe met three times with Duterte in 2017: Abe paid an unconventional visit to Duterte’s Davao residence in January; in October, Duterte visited Tokyo and met with Emperor Akihito; and in November, the two met during an ASEAN visit in Manila.

The two leaders also discussed bilateral issues in November 2018 at the sidelines of the ASEAN Summit in Singapore. Parallel with high-level joint committee meetings, these summits displayed the increased stability of bilateral relations, and Duterte went as far as to announce that the two countries were “closer than brothers”.

With injections of Japanese funding for infrastructure and development projects also welcomed by previous administrations, it is not surprising to find that Japan remains the Philippines’ top donor of development assistance. As the Duterte government reaches out to Japanese businesses, it is clear that Manila regards Tokyo’s investment as a valuable contribution to the administration’s “Build, Build, Build” program, which is seen as a vital foundation to improve public infrastructure and stimulate economic growth. In line with each country’s interests in the Asia-Pacific region, closer economic ties provide a strategic opening for both leaders.

The infrastructure-based bilateral initiative offers Tokyo the opportunity to demonstrate influence in Southeast Asia ­­– and also in a country where Washington, a traditional ally and donor, is temporarily out of favour. Meanwhile, the pressing need to update Philippine infrastructure and assistance for post-conflict reconstruction in the south gives Manila an incentive to engage in a deeper partnership with a government that has long been involved in development projects in the country.

Japan is also able to present itself as a more dependable source of aid amid uncertain Chinese investment. In addition to the “fast and sure” approach and new projects agreed at the beginning of 2019, Philippine Finance Assistant Secretary Tony Lambino has highlighted the Metro Manila Subway Project finance from Japan as “one of the softest loans [the Philippines has] ever negotiated.” This is perhaps what prompted Duterte to acknowledge Japan as the country’s “biggest helper,” and helps pave the way for a more positive image of Tokyo, not only in Manila but also in the broader region.

In the end, whatever the outcome of May’s midterm elections, debate over the future of the Philippines’ alignment with both China and the US is likely to continue. Yet recent improvements in the bilateral relationship between Manila and Tokyo may act as a stabilising force, providing the Duterte administration with a degree of certainty amidst a volatile regional landscape.