India must be realistic about Russia relations

New Delhi can talk up ties all it likes, but Moscow’s eyes are also looking east – to Beijing. 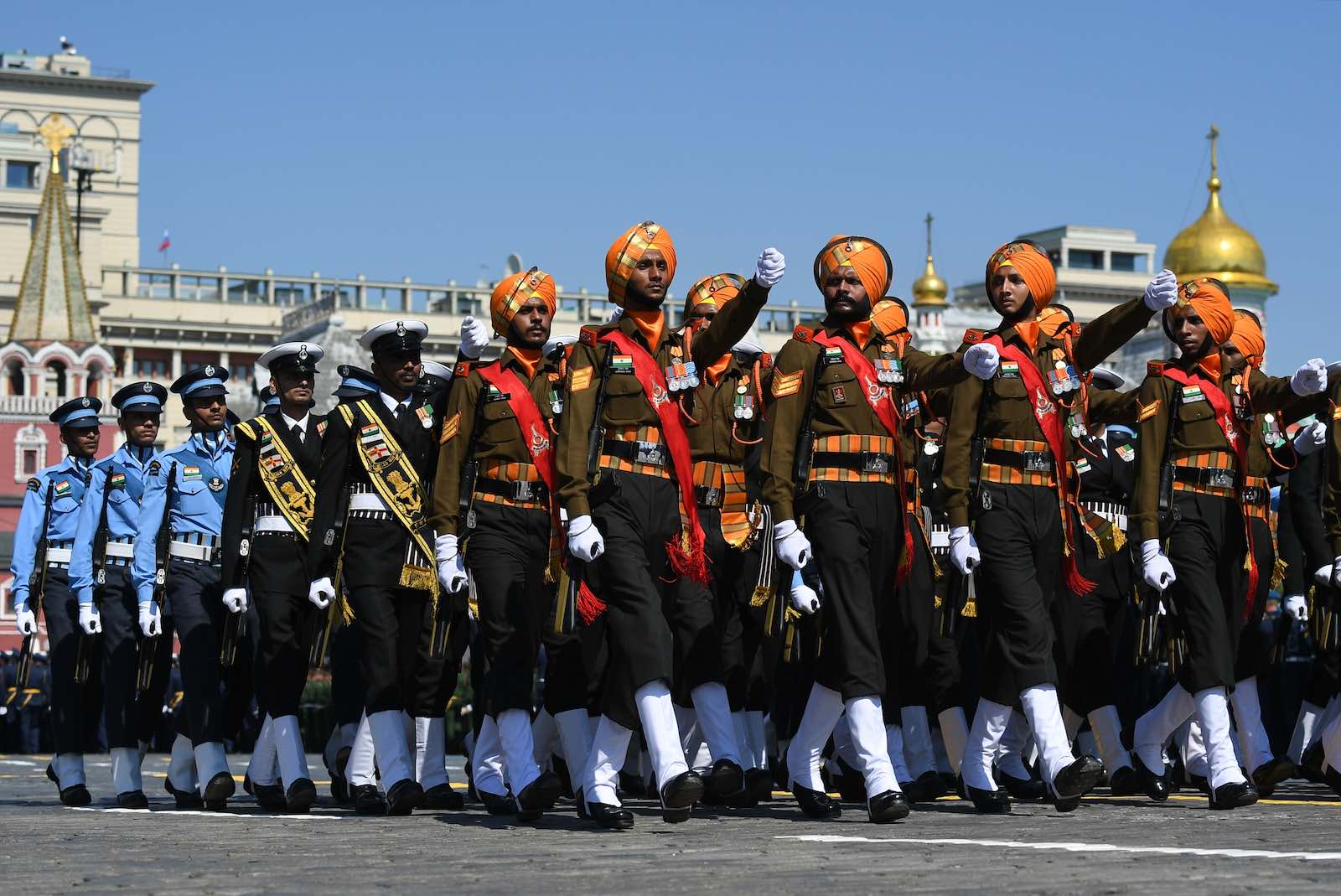 Servicemen of the Armed Forces of India march during a Victory Day military parade in Red Square marking the 75th anniversary of the victory in Second World War on 24 June 2020 in Moscow, Russia (Ramil Sitdikov via Getty Images)
Published 26 Feb 2021 06:00   0 Comments

The visit to Moscow by India’s Foreign Secretary Harsh Shringla on 17–18 February was his first overseas trip outside South Asia during the corona crisis, underscoring the importance India attaches to its strategic partnership with Russia. But it is a relationship where New Delhi must also be cognisant of Moscow’s ties with Beijing and the shifting dynamics of global power, particularly as India’s competition with China continues to grow.

Russia’s arms sales to India have been the mainstay of the bilateral relationship since the former USSR and India signed a deal in 1971. More than 60% of India’s defence forces are equipped with Russian weapons. India’s ambition to become an arms exporter also explains why it collaborates with Russia in producing arms. Both countries are cooperating in the manufacture of the “Brahmos” missile system and licensed production in India of SU-30 aircraft and T-90 tanks. They reportedly plan to jointly manufacture AK-203 rifles, involving full technology transfer. India’s decision to buy Russia s S-400 missile system – providing India with a sophisticated anti-aircraft weapon – reflects its wish to maximise its military and diplomatic options by being able to diversify its arms suppliers.

But analogous considerations have also led China to purchase the S-400, which has raised India’s concern given Beijing’s recent territory-grabbing push in the Himalayas. 68% of China’s arms imports come from Russia. China and Russia are also collaborating in arms production.

India-Russia trade and connectivity lag behind those between China and Russia. Trade between Russia and India amounted to US $10.11 billion in 2019–20 and both countries have invested in each other’s oil and gas sectors. They have set a bilateral trade target at $30 billion by 2025. Yet this is nowhere near Russia-China trade, which hit $110 billion in 2019.

At another level, in 2019 a plan for a maritime corridor between Chennai in India and Vladivostok in Russia was formalised. The route would be expected to pass through the disputed South China Sea and increase India’s economic involvement in the Russian Far East. India then extended a $1 billion line of credit for the Russian Far East, the area comprising one third of Russia, rich in minerals, hydrocarbons, timber and fish. Recently Russia expressed its interest in Indian investment in the region.

But since 2015, Chinese investment has accounted for 85% of foreign investment in the Russian Far East. China is also the top trading partner of the Russia-steered Eurasian Economic Union, which comprises former republics of the USSR. In 2019, trade turnover between EAEU countries and India amounted to $13.8 billion, whereas China’s trade with the EAEU that year exceeded $133 billion. Russia has joined China’s Belt and Road Initiative, and Moscow and Beijing are now discussing the coupling of the EAEU with China and creating a Great Eurasian Partnership.

Meanwhile, Russia questions New Delhi’s foreign policy as India strengthens ties with its partners in the Quad–the US, Australia and Japan – to maintain an open rules-based Indo-Pacific. Moscow sees the Quad and Indo-Pacific concept as hostile to the interests of Russia and China. For that reason alone, New Delhi will not be able to drive a wedge between Moscow and Beijing.

Indeed, on the global front, differences between India and Russia about the Indo-Pacific raise the vexed question of multipolarity. India and Russia – and rising China – favour multipolarity. Russia’s longstanding aim has been to shift the post-Cold war global system away from an American dominated order. India envisions a “multipolar Asia” where major and minor powers have equal standing in decision-making, which is a somewhat different emphasis to how Russia’s goals are commonly understood.

Is this Indian hope realistic? The bottom line is that according to the latest figures from the World Bank, China’s $10,261 GDP per capita and Russia’s $11,585 are considerably less than America’s $65,297. India’s GDP per capita, currently around $2,099, is about five times behind China’s. All told, the US will remain the sole superpower, even if China is its closest competitor.

Even if India’s weak economy suddenly surges forward, the hard truth is the Sino-Russian links are far stronger than those between India and Russia.

Enjoying global primacy, the US is also the country most likely to help India against China’s territorial aggression. So Russia’s neutrality on the Sino-Indian border dispute and on China’s belligerence in South and Southeast Asia rules out the chances of India relinquishing its American superpower card.

The unanswered question is what conditions Washington could impose in return for helping India to confront China, especially as New Delhi seeks to strengthen its ties with Moscow. This is where the talk of multipolarity between the weak and strong, power sharing and equal weight in Asia becomes confused.

At the moment China is competing with America regionally in Asia. Sino-US and Sino-Indian hostility could help deepen the ties between the US and India. But rhetoric about an old friendship of convenience between India and Russia can muddle the message.

Even if India’s weak economy suddenly surges forward, the hard truth is the Sino-Russian links are far stronger than those between India and Russia. Progress can certainly be made in Russia-India relations. But an India that is simultaneously Russia-friendly and America-friendly should be realistic about Russia’s international priorities.

Show Comments
Previous Article
Why Aussie exporters won’t be toasting China or the US
Next Article
A Duterte dynasty?