There is substantial – although not complete – policy convergence on international issues. 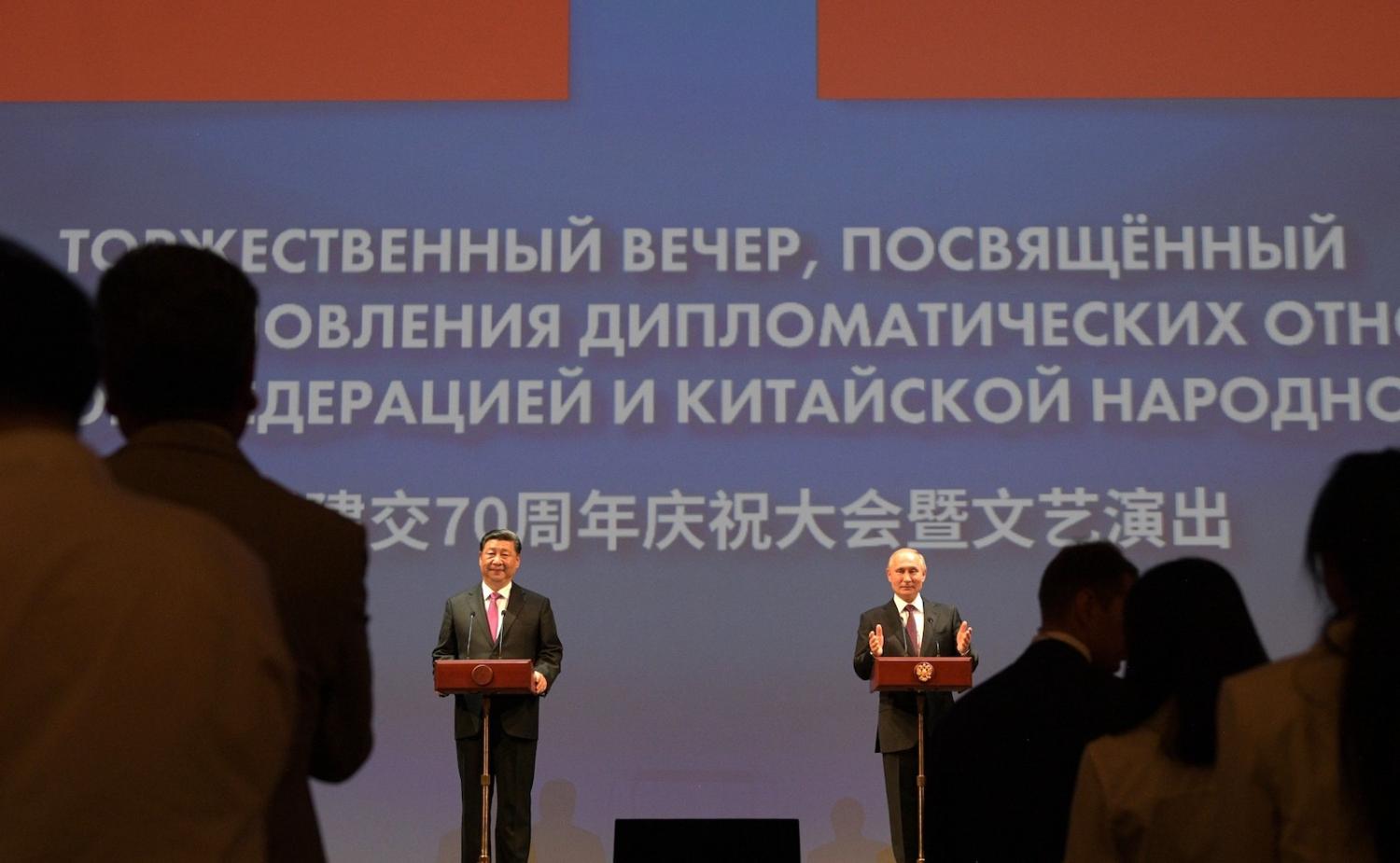 Xi Jinping and Vladimir Putin at a 2019 gala marking the 70th anniversary of diplomatic relations between Russia and China (Kremlin.ru)
Published 14 May 2021     Follow @IAHill

Russia and China’s verbal sparring with the US over competing visions of multilateralism last week in the UN Security Council exemplified the closer ties forged over recent years between Moscow and Beijing.

The burgeoning relationship undoubtedly offers mutual advantage for both countries – but for Moscow, it also contains inherent risks and weaknesses.

Foreign Minister Lavrov recently hailed Russia’s relations with China as “unique”, characterised by “comprehensive partnership and strategic interaction”. And there’s no doubt bilateral cooperation has become both broader and, in some areas, deeper. The relationship is guided by the excellent personal relationship between Vladimir Putin and Xi Jinping.

Closer alignment with Beijing is, pragmatically, a strategic imperative for Moscow: as a counterweight offsetting Russia’s post-2014 estrangement from the US and European Union, and the associated negative political and economic ramifications.

But there are also wider benefits: Putin perceives that closer Russo-Chinese relations will be unsettling for America and its Western partners, complicating strategic calculations for the US, and underscoring Russia’s relevance in Washington.

Pragmatic political, economic and foreign policy considerations are relevant, too.

First, obvious political affinities, reflecting the authoritarian character of both leaders, and their political systems. This has practical implications: Russia has adopted China’s face recognition technology to enhance its domestic security capabilities, and has tried, albeit with limited success, to emulate China’s constraints on internet freedom.

Economic complementarities provide a powerful impetus: for Russia, resource-hungry China is a huge, growing and proximate market for its energy, commodity and agricultural exporters, while China provides Russia with competitively priced manufactures and investment (although less than the Russians would like). Bilateral trade totalled over US$100 billion last year, and China’s share of Russia’s trade has nearly doubled since 2013.

In foreign policy, Russia and China are broadly like-minded. Their interests and agendas often align: in particular, challenging US primacy and antipathy to what they portray as Western revisionist efforts to impose a “liberal” character on the rules-based international order, characterising this as a vehicle for US hegemony. Instead, Russia asserts the centrality of the UN-based international legal framework, especially the principle of non-interference in the internal affairs of sovereign states – a precept strongly endorsed by Beijing.

There is substantial – although not complete – policy convergence on international issues. If not offering explicit support, Russia and China will not oppose each other outright, reassuring each that the other “has its back” – witness Russian reticence over Chinese expansionary activities in the South China Sea and China’s silence over Russia’s aggression in Ukraine. And Moscow’s opposition to the Indo-Pacific concept reflects not only its uncertainty over Russia’s place in this construct, but also concern at its perceived China containment rationale.

Striking the right balance in its relations with Beijing will not be easy for Moscow.

Closer military cooperation between the two countries has grabbed particular attention. This ranges from Chinese participation in annual large-scale Russian military exercises, joint bomber patrols over the Sea of Japan, and joint naval exercises (including in the Indian Ocean). Building on its history as China’s leading weapons supplier, Russia has helped Beijing modernise its armed forces, including providing SU 35 fighter aircraft and S-400 missile systems – and even assisting with new missile launch detection technology.

And yet … there are limits.

Russia is very much the junior partner in this relationship – an asymmetry that will only grow over time – and finds this discomforting. Moscow will strive to retain strategic autonomy, and seek to hedge against the risk of dependence, whether political or economic.

This logic of diversification underpins Russia’s efforts to reinvigorate its historically strong but recently stagnant relationship with India – increasingly China’s military and economic rival. Likewise, Russia’s efforts to improve relations with Japan (impeded, though, by the intractable Kuril Islands territorial dispute) and broaden links with members of the Association of Southeast Asian Nations.

Yet striking the right balance in its relations with Beijing will not be easy for Moscow. Economically, Russia badly needs the Chinese market for its energy and commodity exports, which allows China to dictate the terms of their trade relationship. Maintaining useful alignment with Beijing, while retaining Russia’s room for manoeuvre by diversifying relations with third countries, will be challenging. This dilemma could prove especially acute in respect of India, where expanded Russian defence cooperation, especially providing advanced military equipment, may alarm Beijing.

Russia will also scrutinise critically any expansion of China’s presence and influence beyond the economic realm in the former Soviet space, which Moscow still considers its privileged sphere of influence. And Moscow remains wary of China’s intentions in the Arctic, where Russia regards itself the major player.

And history suggests the relationship is unlikely to be a trusting one. There will be those in Russia, including in the military, quietly mistrustful of China’s growing power and capabilities, and uneasy this could rebound, in time, on Russia should the relationship turn sour.

Meanwhile, for all the unwelcome international complications closer Russia-China relations brings, there are limits to what the US and its partners realistically can do to influence this. But it is important at least to engage seriously and directly with Russia, encouraging Moscow to contemplate the risks of excessive dependence on its eastern neighbour.

Previous Article
Indonesia responds to the cyber dark side
Next Article
London and Hong Kong: Financial centres in parallel peril

Talk of Silk Roads continue to dominate regional conversations, but diversification will be essential to realise the visions that are being advanced.
Peter McCawley 20 Jun 2018 14:00

China still faces daunting development challenges and it will take many decades to close the asset gap with Western countries.
Ian Hill 21 Sep 2021 14:00

Security deterrence is only one factor in the new and fast-moving geostrategic environment of the Indo-Pacific.