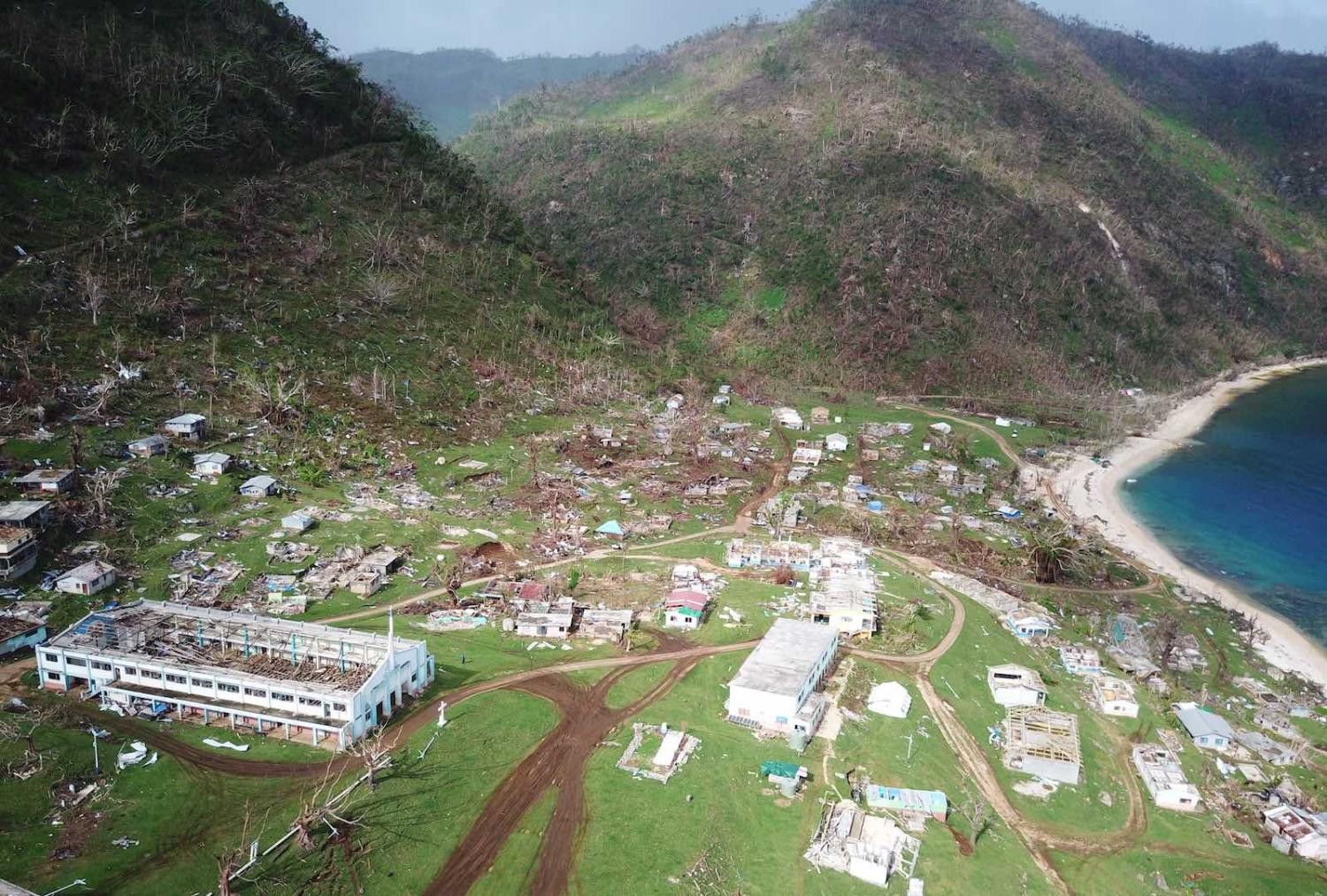 Rated as the country with the highest disaster risk worldwide, Vanuatu is no stranger to severe tropical cyclones. When Tropical Cyclone Pam struck the country in 2015, it affected around 166,000 people and left a trail of destruction.

Similarly, Tropical Cyclone Harold, a category 5 cyclone that hit Vanuatu on 6 April this year, affected around 160,000 people. The northern provinces of Sanma, Malmpa and Penama were severely impacted, with around 70% of the structures damaged in Luganville, the country’s second largest city.

But the context into which Harold landed was quite different from any previous occasion. It was in the midst of a global pandemic, and the emergency response effort also had to be different.

With Covid-19 infections rising across the world, Vanuatu had declared a state of emergency on 26 March, placing restrictions on both international and inter-island travel to minimise the risk of importing and spreading the virus. As Harold approached, the country eased social distancing measures to enable people to seek shelter in evacuation centres, but it did not reduce any restrictions that would facilitate a typical international humanitarian response in a disaster of this size.

While not flawless, the Cyclone Harold response in Vanuatu proved the viability of the localisation concept, even as it highlighted the vast challenges that come with delivering a complex humanitarian response amid enormous constraints.

As a result, the country would directly experience what it means when emergency aid becomes local. “Localisation” is a concept that has been advocated in numerous papers and seminars in recent years, but its implementation has been slow to evolve.

Cyclone Harold, however, left Vanuatu little choice, and the response effort became a case of “forced localisation”. While far from perfect, the outcome clearly established that there is no going back to the old way of doing things.

Alongside the Covid restrictions, the country was already facing a number of challenges. On the political front, the country was under the custodianship of a caretaker government while political negotiations were underway following a general election. And in March, increased volcanic activity on Mount Yasur had started to affect thousands of people on the Island of Tanna.

How the country managed its response to Cyclone Harold in the midst of these challenges can provide insights into what a nationally led disaster response can look like in the Pacific, as explored in the rapid review jointly conducted by the Vanuatu Association of NGOs (VANGO) and the Humanitarian Advisory Group (HAG).

With concerns that an outbreak of Covid-19 could easily overwhelm the country’s medical system, the government took a strong stance on managing the response locally, declaring that “no foreign personnel are being brought to Vanuatu for response efforts at the present time; this will be an internally run operation”.

It was an important step by the National Disaster Management Office (NDMO), as on previous occasions (such as Cyclone Pam), there had been an influx of international support during the response phase, which made the government’s coordination efforts more complex.

While this experience allowed the government to experience how to manage a response with limited external technical support (although internationals living in Vanuatu were still engaged to help), the national response could have been delivered better in a number of areas – especially in the immediate aftermath of Cyclone Harold.

Covid-19 restrictions also included tight quarantine protocols for humanitarian supplies arriving in the country. These restrictions by the government, along with inadequate logistical capacities, resulted in the delay of releasing international humanitarian supplies received. With the delays in releasing supplies, insufficient local stocks of aid and remoteness of the affected areas, formal support was slow to reach people, with some of the worst affected communities in isolated areas not receiving any official aid even after two months. In fact, supplies such as tool kits – urgently required in the early stages of recovery – were reaching some communities only three months after the cyclone, well after people had invested their own savings to build back their homes.

But there were also encouraging signs that the country had made progress by integrating lessons from Cyclone Pam and other disasters. The Provincial Emergency Operations Centres (PEOC) – set up as part of the process to decentralise disaster management capacity – coordinated the response on the ground. This was an important step to ensure the response was guided by local needs, although there were significant opportunities for local expertise to be better utilised in the response. Some of the affected communities from the remote mountain areas in the Island Santo had to walk six hours to reach food supplies, which could have been avoided with better planning.

As the Covid-19 pandemic set in and international staffers still in country were sent home, national humanitarian staff were able to play a greater role in response work. With international surge personel not allowed entry, local recruitment increased and remote support options were used – an approach the government is likely to encourage for future responses. With reduced presence of international personnel, the clusters – coordination groups for specific response sectors such as water, shelter, health, etc. – were chaired by government officials and saw much greater participation of local organisations and national staff, a considerable shift from previous response efforts.

One of the most important aspects of Vanuatu’s response to Cyclone Harold was the role of local communities and traditional structures in supporting affected people. The Malvatumauri (National Council of Chiefs) mobilised communities to raise funds and collect relief items. Youth and mother’s groups from unaffected villages and islands identified ways to help by donating root crops and organising delivery logistics. These traditional ways of supporting people often filled the gaps in the official response. Furthermore, sourcing food rations locally – promoted by the government – meant that the food relief provided to affected communities was more diverse and nutritious than the standard relief food items distributed in previous responses.

The aid distribution from donors, however, mostly followed established patterns of funding international organisations. Very little funding was directly provided to local organisations actually leading the response on the ground – a missed opportunity for the donors to better support the step-up in local leadership and capacity during the response.

While not flawless, the Cyclone Harold response in Vanuatu proved the viability of the localisation concept, even as it highlighted the vast challenges that come with delivering a complex humanitarian response amid enormous constraints. For this reason, it will likely be a point of no return for humanitarian response in Vanuatu. After demonstrating that they can manage a major disaster response with limited external capacity, in a global pandemic, heavy reliance on international experts is a thing of the past.

Of course, there is more to be done by the government, local civil society and international organisations to ensure the next responses build on this experience. But for the time being, it will be telling to see how these lessons contribute to change in disaster response in Vanuatu as well as in the whole Pacific region.

Contrarian views are needed to assess the China risk. And we shouldn’t assume this century will be indisputably China’s.
Syed Fazl-e-Haider 9 Jan 2020 07:00

If Tehran pursues further retaliation for the US strike on a top commander, its neighbour to the east is an easy mark.
Joao da Cruz Cardoso 16 Nov 2021 06:00