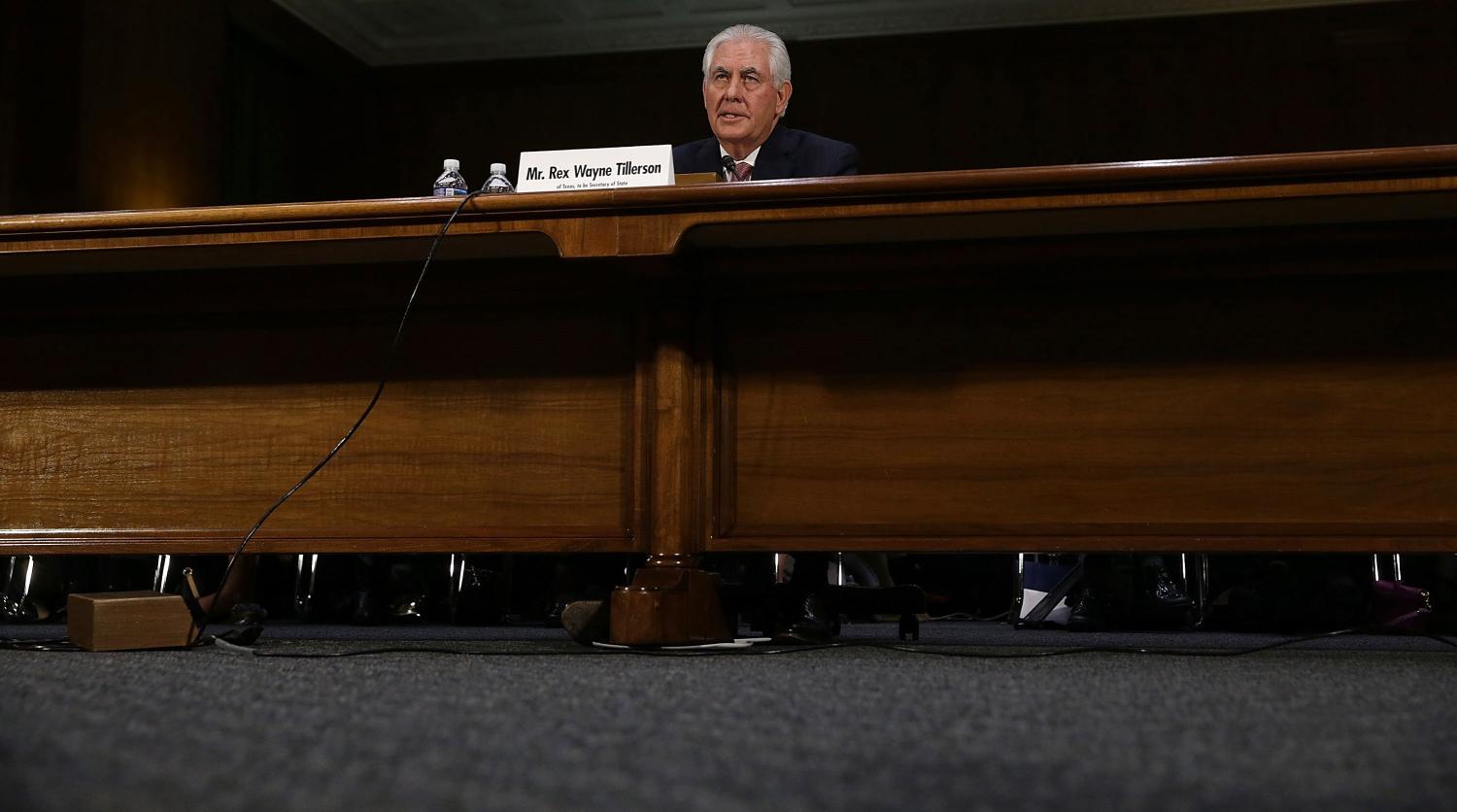 Trump misunderstands just how much the US benefits from international trade, but how much damage could he actually do? Stephen Grenville:

When Trump has the reins of power in his hands, he will of course find that his actions are constrained: much of American manufacturing is already so deeply integrated with global supply chains that those who manage it will be profoundly unenthusiastic about his attempts to undo this integration. As well, his threatened tariffs may be merely bargaining chips in a poker-game to redistribute the benefits of globalisation. But things can go wrong: a tit-for-tat trade war with China could be initiated at the drop of a tweet. This would be very bad news for us all.

The normally restrained Reuters said Tillerson had 'set a course for a potentially serious confrontation with Beijing'. Reuters is not exaggerating. Short of a military blockade, it's hard to see how the US can stop Chinese island-building and deny Beijing access to the islands it has already built.

Robert Kelly outlined four key issues in Northeast Asian security to keep an eye on in 2017:

Trump will almost certainly do little good (he lacks the necessary patience, attention span, and industry) and has the potential to trip up badly. Nor will the region take its cues from him. Asia’s rise is increasingly distinct from the United States and its dynamics are increasingly independent of Washington influence.

Earlier this month Indonesia announced a suspension of all military cooperation with Australia following some apparently offensive material at a Perth army base. Jewel Topsfield:

The long-term impact of the Campbell Barracks affair on the defence relationship is difficult to predict. Superficially, things are pretty much back to normal, with the exception of the suspension of the language training program pending the results of the investigation, but reverberations will continue.

The blow-up is a reminder of the fault lines in the Indonesian and Australian defence relationship that mean issues can rapidly escalate.

This week Australia and Timor-Leste jointly announced that the latter would notify the former of its wish to terminate CMATS, the 2006 treaty meant to enable joint development of the Greater Sunrise gas field. Bec Strating:

Without CMATS, the Australian government can no longer rely upon the treaty to prevent discussions on maritime boundaries. This could also have broader ramifications for Australia’s foreign policy, in particular its position that parties to the South China Sea should respect the international 'rules-based order'. While CMATS was in place, Australia could counter charges of hypocrisy by arguing that its respect for the legally binding treaty was consistent with the rules-based order.

Steve Bracks argued that renegotiation of the boundary is in Australia's interest:

It is in Australia’s national interest to have a relationship with Timor-Leste based on trust and mutual respect. It reveals much about the relationship between the two countries that not one minister from the Abbott or Turnbull governments has visited Timor-Leste, which is a little over one hour's flying time from Darwin.  There is no question that Timor-Leste is a friend of Australia, however, it is understandable that many Timorese believe Australia has not always acted as a friend.

Today, Japanese and Australian PMs Shinzo Abe and Malcolm Turnbull are due to meet in Sydney. The rather extreme investment imbalance will be something of an elephant in the room, writes Greg Earl:

It is little appreciated that in 2015 Japan was Australia’s biggest foreign direct investor (on a net basis) at $14 billion, compared with $9.7 billion from the US. This investment has moved on from mining to sectors such as infrastructure, food processing and insurance. Japan has also overtaken the United Kingdom to be the second biggest cumulative direct foreign investor at $86 billion (compared with the UK's $76 billion). This is great for Australia and should underpin the meetings with Prime Minister Malcolm Turnbull – except that it’s an extremely one-sided story, as Australian net direct investment in Japan was only $14 million. That’s no great vote of support for Abenomics from Australian business, and a subject of much debate in the bilateral business community.

Brookings India's Dhruva Jaishankar wrote on how concerns over China and Trump may precipitate a strengthening of Australia-India ties:

Concerns about Chinese cyber espionage  (particularly of intellectual property) as well as worries about Chinese political influence have sown doubts in the minds of some erstwhile proponents of closer ties with Beijing, including some in the business community. On the other hand, Donald Trump’s election victory has raised questions about the reliability of the United States as an ally...In this context, Australia’s relations with India (along with Japan) have the potential to assume greater prominence.

While China may now be the dominant economic actor in Central Asia, local states are wary of Chinese infrastructure investment hegemony. Raffaello Pantucci:

Trapped by geography between a sanctioned Russia, a still-recovering Iran and the disputed Caspian, they are only able to find China as a substantial and long-term investor and partner. India has tried and thus far not delivered, and while they discuss with Pakistan, Europe, Korea and Japan, projects as big as China’s have been slow in arriving. In contrast, Beijing signs contracts and infrastructure appears.

Kasek Galgal, one of the Aus-PNG Network's GE Papua New Guinea Emerging Leaders Fellows, wrote on the potential and pitfalls of increasing ICT uptake in PNG:

While the benefits of further ICT development in PNG may be clear, many expansion and adoption challenges remain. Of all the countries in the Pacific, PNG is among the most populous with about 7.3 million, 87% of whom live in rural areas where challenging terrain makes further mobile penetration and uptake difficult. Being the largest, most mountainous island in the region, infrastructure has always been an issue for development within PNG.

Rodger Shanahan argued that the media may be inflating the numbers when reporting the Syrian civil war:

In such a confusing environment, accurate numbers are always going to be hard to obtain. Organisations such as the UN have to err on the side of caution and assume a worst-case number. Other news agencies, however, then run with the figure. The result is that a number that was most likely based on a guess-timate becomes a fact with all the authority of the UN behind it.

... our ally appears to be readying to align with an exceptionally violent, tortuous and despotic government (and its Russian mentor), while expanding its footprint to end ISIS once and for all. In Syria, it is unlikely Trump will seek anything less than the current military commitment from America’s allies, and based off his mercantilist rhetoric will likely demand far more. Our government can either pull out its support, doubtless infuriating Trump, or become complicit in returning Syria to under Assad’s thumb.

Previous Article
Malaysia's Rohingya aid flotilla: Activism for its own sake
Next Article
Obama's legacy: The world is more dangerous for Australia

China and India have peacefully resolved similar incidents in the past. This time, however, the threat of war is being freely mentioned.
Harriet Smith 29 Mar 2017 16:47