A policy-free campaign in Asia’s oldest democracy results in a guessing game in the region for where next. 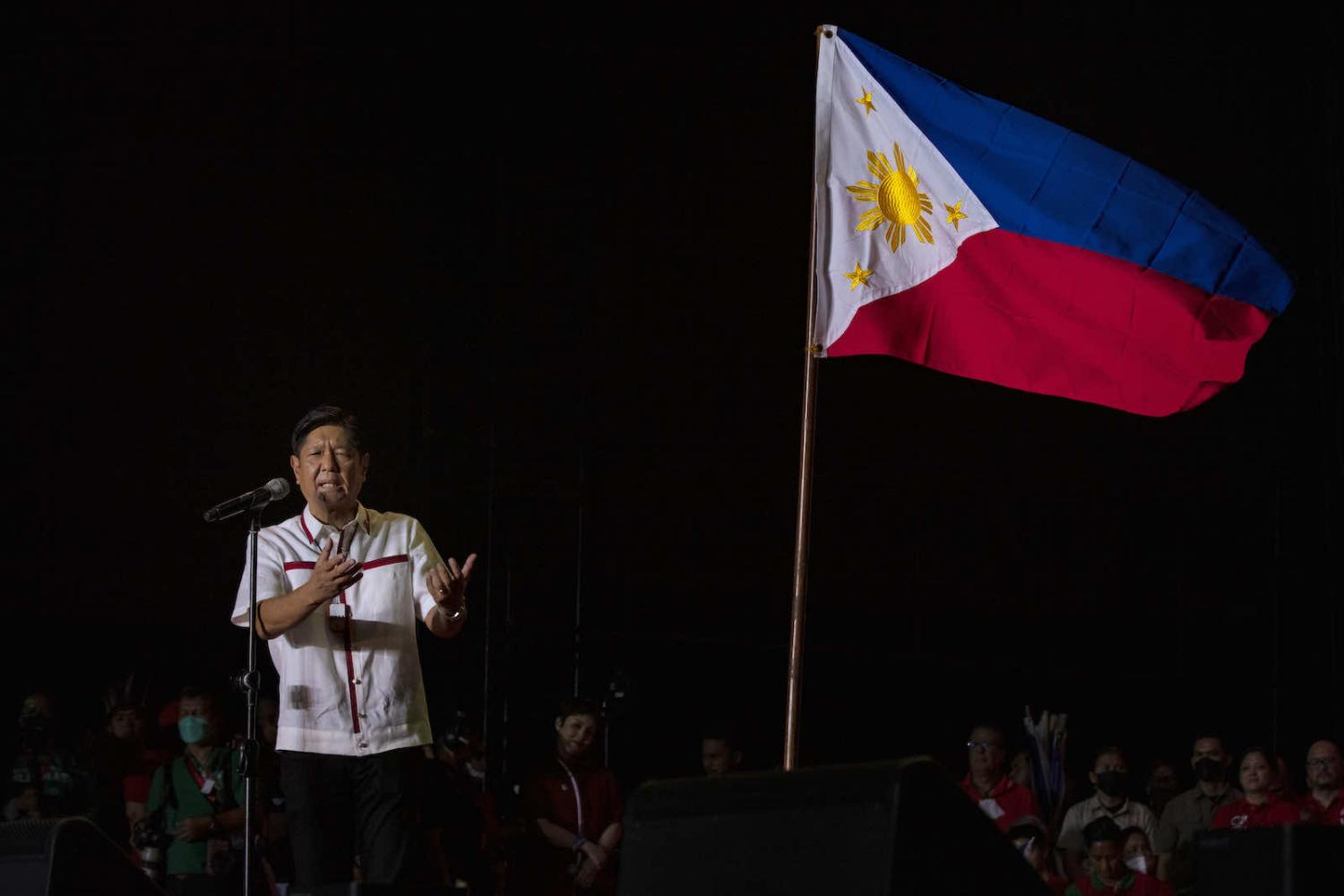 Ferdinand “Bongbong” Marcos Jr: the family’s return to Malacañang Palace is shocking, but not surprising (Ezra Acayan/Getty Images)
Published 13 May 2022

The offspring of strongmen were the clear winners in last Monday’s Philippine national election. Ferdinand “Bongbong” Marcos Jr is set to follow in the footsteps of his father, the late dictator Ferdinand Marcos, and expected to be sworn in as President in July. Next to him will be the new Vice President Sara Duterte, daughter of departing president Rodrigo Duterte, whose championing of a police killing spree of alleged drug addicts has attracted international notoriety.

The Marcos-Duterte ticket was undoubtedly central to the outcome. Running separately in the presidential race, as originally looked likely, would have left open a window of possibility of victory for outgoing VP and liberal presidential candidate Leni Robredo. As it was, Robredo’s pink campaign placed a distant second, winning fewer than half of the Marcos vote.

The Marcos family’s return to Malacañang Palace is shocking, but not surprising. For three decades the family have been taking advantage of the information vacuums about the martial law period left by uncritical history textbooks. A carefully crafted and actively disseminated folklore about a golden era under Marcos Sr filled the void. The experience amounts to a cautionary tale about the careful and strategic forgetting of episodes of grand atrocities and abuses of power, stewarded by those responsible.

Questions now turn, domestically and abroad, to the kind of leader Marcos Jr will be. Truth be told, it’s a guessing game, as the Marcos campaign avoided all debates and refused to be interviewed by credible journalists, preferring instead to disseminate campaign messages as memes via TikTok influencers and vloggers on YouTube.

While it is difficult to predict the new administration’s foreign policy positions in any detail, due in large part to the campaign’s deliberate obfuscation, there is no doubt the Philippines represents a significant piece in the puzzle of shifting geopolitical allegiances in the region.

What we do know is that the election was one of the most consequential in half a century. The Philippines might be Asia’s oldest democracy, but the continued appetite for strongman rule demonstrates a deep ambivalence about liberal democracy’s promises of political equality and rule of law and the likely continuation of the public’s acceptance of the autocratic practices that characterised Duterte’s presidency.

The new leadership is also consequential to how growing ties to China will be balanced with the country’s historical alliance with the United States. While it is difficult to predict the new administration’s foreign policy positions in any detail, due in large part to the campaign’s deliberate obfuscation, there is no doubt the Philippines represents a significant piece in the puzzle of shifting geopolitical allegiances in the region.

Duterte steered the country towards China, stirring anti-US sentiment at home to invoke nationalist fervour. He threatened to rescind bilateral military agreements with Washington, despite US support for the country’s territorial claims against China in the West Philippine Sea. Duterte’s term exemplified the challenges faced by the United States in promoting democracy and human rights in Southeast Asia, and strengthening alliances to counter China’s rise, against the undertow of anti-Western sentiment.

It is easy to imagine Marcos Jr, as his late father also did, continuing to court closer ties with Chinese leadership. He has done so before. In 2007, as provincial governor, he was pivotal in the establishment of a Chinese consulate in the northern Philippines. In 2016 he praised Duterte for “moving in the right direction” by cultivating closer ties with Moscow and Beijing.

However, Marcos faces a growing negative sentiment towards China at home. Polls reported Filipinos to be overwhelmingly dissatisfied by the Duterte administration’s inaction in the face of increasing Chinese aggression in the West Philippine/South China Sea, while other surveys paint a mixed picture of local attitudes toward China. Unwilling to engage with the arbitration ruling of the Hague, Duterte had promised to take the matters of territorial dispute directly to China’s President Xi Jinping (via jet ski), but as with most of Duterte’s pledges related to Chinese partnership, including new big infrastructure projects, nothing tangible has emerged.

Another constraint on a Marcos administration’s further pivot towards Beijing is the fact that, despite his strong rhetorical stance against the United States (and a demonstrable personal resentment towards the West), Duterte was ultimately persuaded by the country’s security establishment to soften its stance. The Pentagon and the Philippine military have maintained robust cooperation during the last six years.

With its strategic location in the South China Sea, US military cooperation with the Philippines underpins its alliance system in the Indo-Pacific. At the same time, a democracy promotion agenda in the region is under immense strain. Thailand, Cambodia and Myanmar have all strengthened ties with China. If the Philippines slides further into electoral autocracy, only Indonesia is left flying the flag for democratic government in Southeast Asia.

The sins of the father will have no bearing on how Beijing will engage with the new Philippine government. How Washington engages with another Marcos administration is yet to be seen. But here, history is instructive. As I detailed in my recent book, Chasing Freedom: The Philippines Long Journey to Democratic Ambivalence, the archipelago has long found itself at the centre of US foreign policy misalignment, between its democracy agenda and its geopolitical goals. In 1979, when US-backed dictators elsewhere in the world began to topple, Washington’s support for Marcos Sr’s martial law regime remained strong, much to the dismay of the opposition. The sentiment was candidly captured at the time by the US Secretary of State, and most likely still reigns. For as long as the US has military bases in the Philippines, Cyrus Vance said, the human rights and political freedoms of Filipinos will have to “yield to overriding US security considerations”.

Previous Article
China and the West: It’s about understanding each other
Next Article
Payne v Wong: The foreign policy election debate

Bhutan: Happy days for the jab in between a strategic pinch

The rollout of Covid-19 vaccinations is a remarkable achievement for the kingdom. More tests lie ahead.
Robert E Kelly 17 Jan 2017 09:17

Historians will see Obama’s mature presidency as a high point for US relations with the region.
Max Walden 9 Aug 2018 12:00