Duterte’s back-down on US forces in Philippines

After several threats to scrap the agreement giving US troops a legal basis in the country, challenges are lingering. 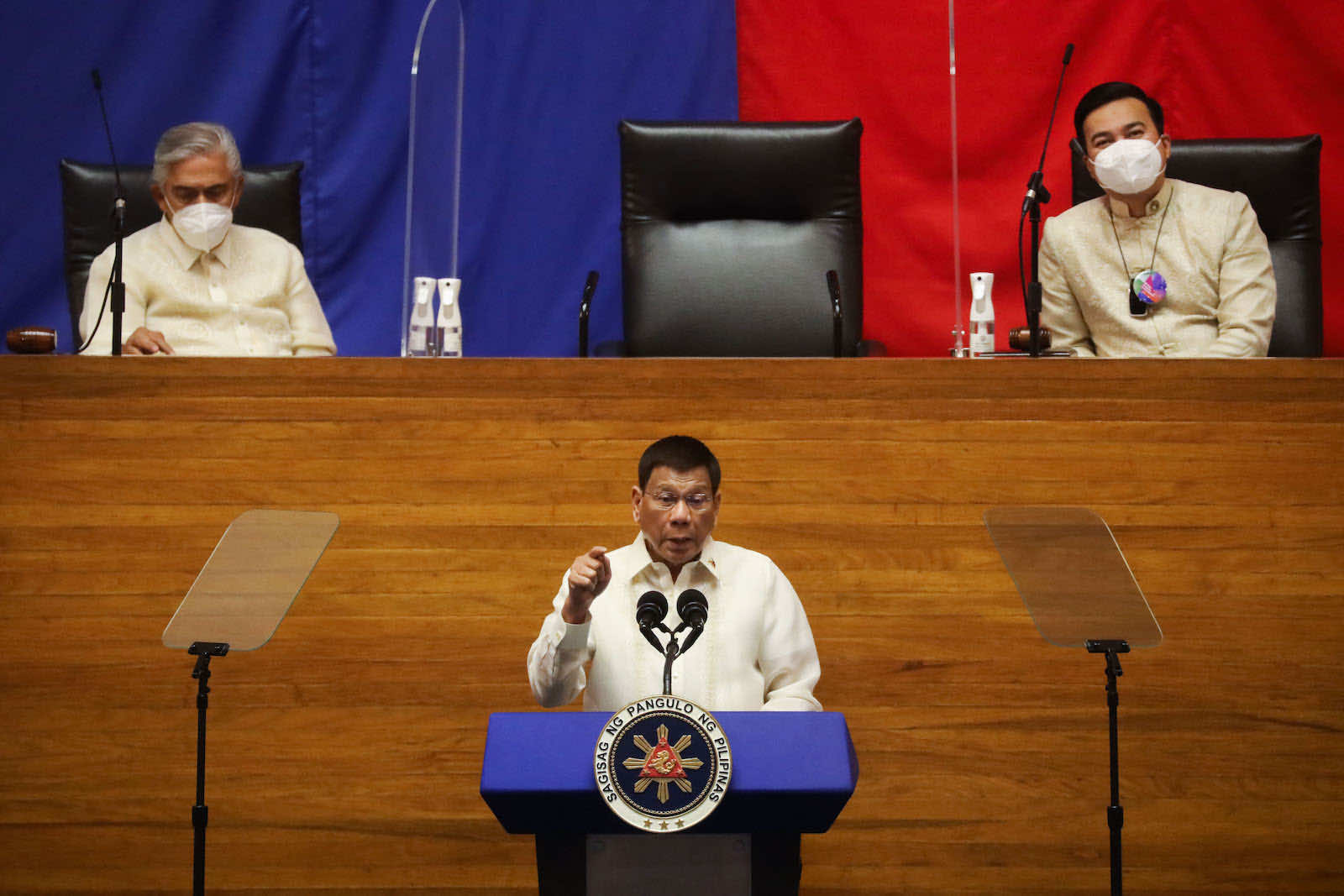 Philippine President Rodrigo Duterte speaks during the annual state of the nation address at the House of Representatives in Manila on 26 July (Lisa Marie David/AFP via Getty Images)
Published 24 Aug 2021 10:00   0 Comments

Philippine President Rodrigo Duterte has finally put an end to uncertainty regarding the fate of the Visiting Forces Agreement (VFA) between the Philippines and the United States. This 1999 agreement provides the rules, guidelines and legal status of US soldiers during military exercises in the Philippines. After announcing the cancellation of the VFA in February 2020, Duterte has since suspended the process of termination three times – in June and November 2020, and again in June 2021. His decision to fully restore the VFA came after meeting with US Defense Secretary Lloyd Austin on 30 July in Manila.

Duterte had sought to cancel the VFA over what could only be interpreted as a personal grudge and a bid to gain leverage. His order to cancel the agreement came after the United States revoked the visa of Duterte’s staunch ally and Philippines Senator Ronald Dela Rosa, a former police chief allegedly involved in the human rights violations during the Duterte administration’s so-called “war on drugs”.

Duterte also linked the VFA to the challenges of the pandemic crippling the country when he sought access to US vaccines in exchange for restoring the agreement.

“If you want the VFA, you have to pay,” Duterte declared. His administration later flagged a much higher price tag for US military assistance for the country to restore the agreement. “Pakistan got $16 billion,” presidential spokesman Harry Roque said, referring to a span between 2001 and 2017. “We think we should get something similar or close to that amount. But definitely, not the amount we’re currently getting,” noting the Philippines received $3.9 billion for the same period. Roque would go on to say: “We want just compensation – not loose change, not outdated equipment.”

As the debate unfolded, with critics slamming Duterte for an “extortionist” approach, the United States did submit a list of military aid it would donate to modernise the Armed Forces of the Philippines.

Duterte also linked the VFA to the challenges of the pandemic crippling the country when he sought access to US vaccines in exchange for restoring the agreement. “If they fail to deliver,” Duterte warned, “they better get out. No vaccine, no stay here.” The United States did donate 3.2 million doses of the Johnson & Johnson vaccine, following an initial delivery of 3 million doses of Moderna. Duterte would later admit that the donation led him to reinstate the VFA. “We did a give and take … I conceded to the continuance of the Visiting Forces Agreement in gratitude.”

The episode appears to have underlined the effectiveness of Duterte’s undiplomatic brand of transactional diplomacy. Even if the president did indeed get what he wanted, his administration however remains at an impasse in negotiations with the United States regarding criminal jurisdiction over American troops.

Two high-profile cases underscore the controversy about this clause. In 2006, a US Marine was sentenced for rape to 40 years in prison by a Philippine court. The Marine was initially detained at a local jail, but after sentencing was transferred to the US embassy, prompting a public outcry. He was subsequently acquitted three years later. In 2015, another US Marine was given a 12-year jail sentence for homicide. Instead of a regular prison cell, he was held at the Philippines army headquarters only to see the sentence subsequently reduced, with the Marine released in 2020. Roque complained that the killing “personifies the death of Philippine sovereignty,” although it was Duterte who pardoned the Marine in 2020, after which he was eventually released and deported to the United States.

It seems more likely that negotiations between the Philippines and the United States over these legal issues will drag on.

Human rights groups in the Philippines largely condemned both cases as “another hallmark of the Philippines’ subservience to the US”. But when Duterte reinstated the VFA, no changes were made to its original text. But Philippine Defense Secretary Delfin Lorenzana explained that there will be a “side agreement” which will serve as an addendum to the VFA. The detail is yet to be revealed.

There are ongoing discussions in the Philippines regarding its other military agreements. A Philippine senator has suggested that talks about the VFA should reference the Philippines’ 2012 Status of Visiting Forces Agreement with Australia (SOVFA), in which there is parity treatment of military forces. The SOVFA ensures “respect for and ascendance of laws of the Receiving State” and provides a clear set of rules for Australian soldiers in the Philippines in case of “concurrent jurisdiction where an offence is punishable under the laws of both the Receiving and Sending States”.

However, it seems more likely that negotiations between the Philippines and the United States over these legal issues will drag on, given Duterte has already restored the VFA. The president might have managed to extract some material concessions with his approach, yet he has consequently relinquished an opportunity he himself created for the Philippines to demand parity and reciprocity in the agreement as a true “sovereign equal” – an issue that continues to haunt the Philippines’ alliance with the United States.