A younger demographic and less social reliance on the state could see local nations seeking advantage amid the changes. 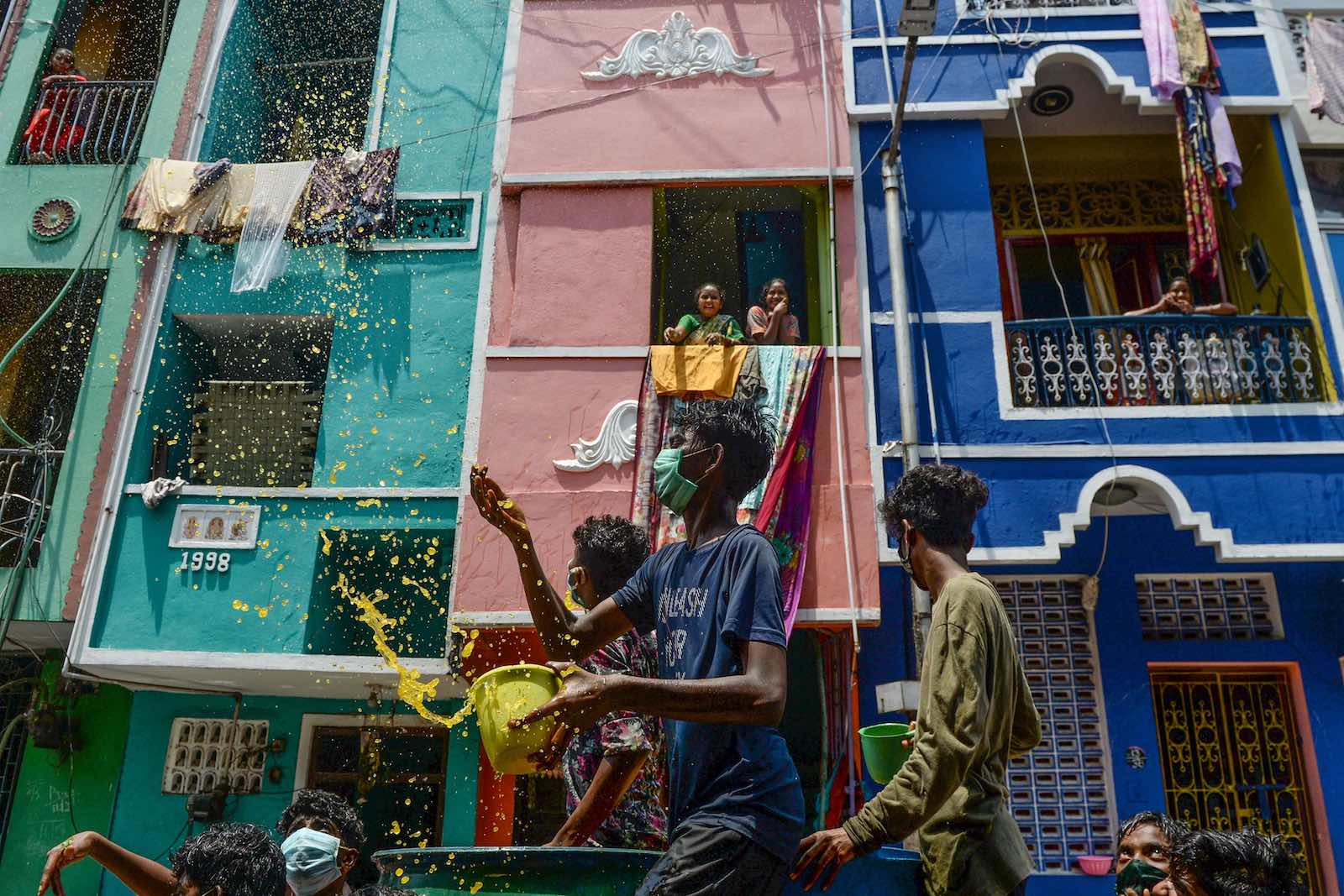 Children throw a mixture of water, neem herb, and turmeric in what is said to be a natural disinfectant on a Chennai street during a government-imposed nationwide lockdown (Arun Sankar/AFP/Getty Images)
Published 10 Apr 2020 06:00   1 Comments

Many people assume that South Asia is a sitting target for coronavirus, with potentially millions of deaths leading to an impoverished and destabilised region just around the corner. That might well happen, and the countries in the region are locking down. But there are also reasons to think that Covid-19 could have less of an impact on South Asia than many fear.

South Asia often brings to mind images of huge cities with teeming slums, poverty, poor sanitation, and disease. Surely, this means that when the virus inevitably gets a proper hold in the region, countries such as India, Pakistan and Bangladesh will suffer death rates and economic and social dislocation far in excess of that experienced in developed countries.

What’s more, these dislocations could further exacerbate the many security problems faced by the region. Could Covid-19 destabilise Bangladesh for example? Or could the crisis embolden extremists in India and Pakistan, with big implications for domestic or cross-border security?

The consequences of the Covid-19 crisis have a long time to play out. But one thing we do know is that coronavirus can strike the world in unexpected ways. Indeed, there is a possibility that South Asia could come through the crisis, if not unscathed, then perhaps less damaged than other parts of the world.

Demography also favours South Asia. India, Pakistan and Bangladesh are among the youngest countries in the world, with 5–8% of their populations aged over 60 and 2–3% aged over 70.

These countries could just be further down the curve than other countries, but they may also be following their own curves. Some speculate that tropical countries will fare better than temperate countries, potentially reflecting factors such climate, exposure to malaria, or even high tuberculosis vaccination rates.

But demography also favours South Asia. India, Pakistan and Bangladesh are among the youngest countries in the world, with 5–8% of their populations aged over 60 and 2–3% aged over 70. This compares with Italy’s age distribution of about 16% aged over 60, and 10% aged over 70. With around 85–90% of Covid-19 deaths in the over 60 demographic this may make for a smaller population at risk.

Second, what could the Covid-19 crisis mean for social order and political stability in South Asia? Anecdotally we are not seeing reports of runs on basic commodities or the equivalent of the toilet paper wars that have afflicted Australia’s supermarkets. Although they have few resources for social welfare, India, Pakistan and Bangladesh could also in fact have greater social resilience than many rich countries. People generally rely less on the state and may have more experience in dealing with disasters. Strong social and religious traditions could also provide a valuable reservoir to help resilience.

Third, are the economic consequences from measures taken to curtail the spread of the virus, including for food security. India, Pakistan and Bangladesh have experienced relatively high economic growth for several years, although this has been slowing. India’s large and relatively sheltered economy (as evidenced by its withdrawal from the RCEP trade agreement) will likely help protect it from global shocks, such as occurred in the 2009 Global Financial Crisis. Across the border, Bangladesh, which has greater reliance on trade, will likely fare less well. Pakistan, which recently needed an International Monetary Fund bailout, is also fiscally fragile.

Despite endemic food security issues among the poor, exacerbated by recent food price inflation, these countries could be relatively resilient to disruptions in global supply chains.  India, Pakistan, and Bangladesh all produce overall food surpluses, helped by high tariff barriers on food imports, which makes them less dependent on global food trade than some other countries. They also have long-established systems for government supported food distribution to the poor.

Last, is regional security. The consequences of the Covid-19 crisis for security and regional relationships will likely play out over a period of years, with many unexpected second and third order effects. But these could potentially be less adverse in South Asia.

The crisis has, for example, been used by Indian Hindu nationalists who blame the spread of Covid-19 in India on the Muslim minority community, or Pakistan. Severe health or economic impacts, if they were to occur, would also likely have an adverse effect on domestic order and security across South Asia.

But the crisis could also provide an opportunity and an imperative to end run existing logjams in regional relationships. Indian Prime Minister Modi has sought to use the crisis to jumpstart paralysed regional cooperation mechanisms. India’s porous borders with neighbours such as Bangladesh and Nepal make regional cooperation particularly important for it. The Pakistan government, or its military, might also see value in using the crisis to transcend some of Pakistan’s self-created security problems with India.

China is of course the biggest unknown for the region. It is possible that the crisis (and China’s role as the origin of the virus) could worsen an already generally negative strategic dynamic between India and China. But the two countries could also choose to use the crisis to find areas for enhanced cooperation in a new and reshaped post-Covid-19 world order.

It will be over months and years that all this unfolds. But we may find that countries in South Asia, and elsewhere, demonstrate unexpected degree of resilience or may even find ways to use the crisis for their advantage.

Show 1 Comments
Previous Article
Covid-19: A war of words
Next Article
The Interpreter is slowing down for Easter