Susan A. Thornton is Visiting Lecturer in Law at Yale Law School and Senior Fellow at the Paul Tsai China Center. In 2018, she retired from the State Department after a 28-year diplomatic career focused primarily on East and Central Asia. In leadership roles in Washington, Thornton worked on China and Korea policy, including stabilising relations with Taiwan, the US-China Cyber Agreement, the Paris Climate Accord and led a successful negotiation in Pyongyang for monitoring of the Agreed Framework on denuclearisation.

In her 18 years of overseas postings in Central Asia, Russia, the Caucasus and China, Thornton’s leadership furthered US interests and influence and maintained programs and mission morale in a host of difficult operating environments. Prior to joining the Foreign Service, she was among the first State Department Fascell Fellows and served from 1989–90 at the US Consulate in Leningrad. She was also a researcher at the Foreign Policy Institute from 1987–91. Thornton holds degrees from the National Defense University’s Eisenhower School, the Johns Hopkins School of Advanced International Studies, and Bowdoin College. She speaks Russian, Mandarin Chinese and French, is a member of numerous professional associations and is on the Board of Trustees for the Eurasia Foundation. 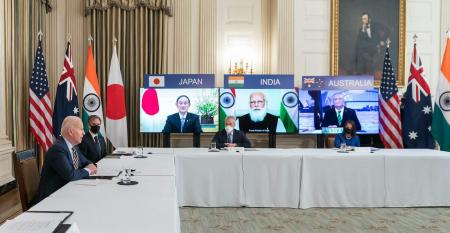 The Quad (finally) delivers: Can it be sustained?
The future of the grouping might well be determined by China’s behaviour.
Top