Skip to main content
Man of Contradictions: Joko Widodo and the Struggle to Remake Indonesia
On this page
This article is more than 2 years old
Lowy Institute Papers

Man of Contradictions: Joko Widodo and the Struggle to Remake Indonesia

The first English-language political biography of Joko Widodo, to be published on 1 September 2020 by Penguin Specials as a Lowy Institute Paper.

By Ben Bland
On this page

From a riverside shack to the presidential palace, Joko Widodo surged to the top of Indonesian politics on a wave of hope for change. However, six years into his presidency, the former furniture maker is struggling to deliver the reforms that Indonesia desperately needs. Despite promising to build Indonesia into an Asian powerhouse, Jokowi, as he is known, has faltered in the face of crises, from COVID-19 to an Islamist mass movement.

Man of Contradictions, the first English-language biography of Jokowi, argues that the president embodies the fundamental contradictions of modern Indonesia. He is caught between democracy and authoritarianism, openness and protectionism, Islam and pluralism. Jokowi’s incredible story shows what is possible in Indonesia – and it also shows the limits. 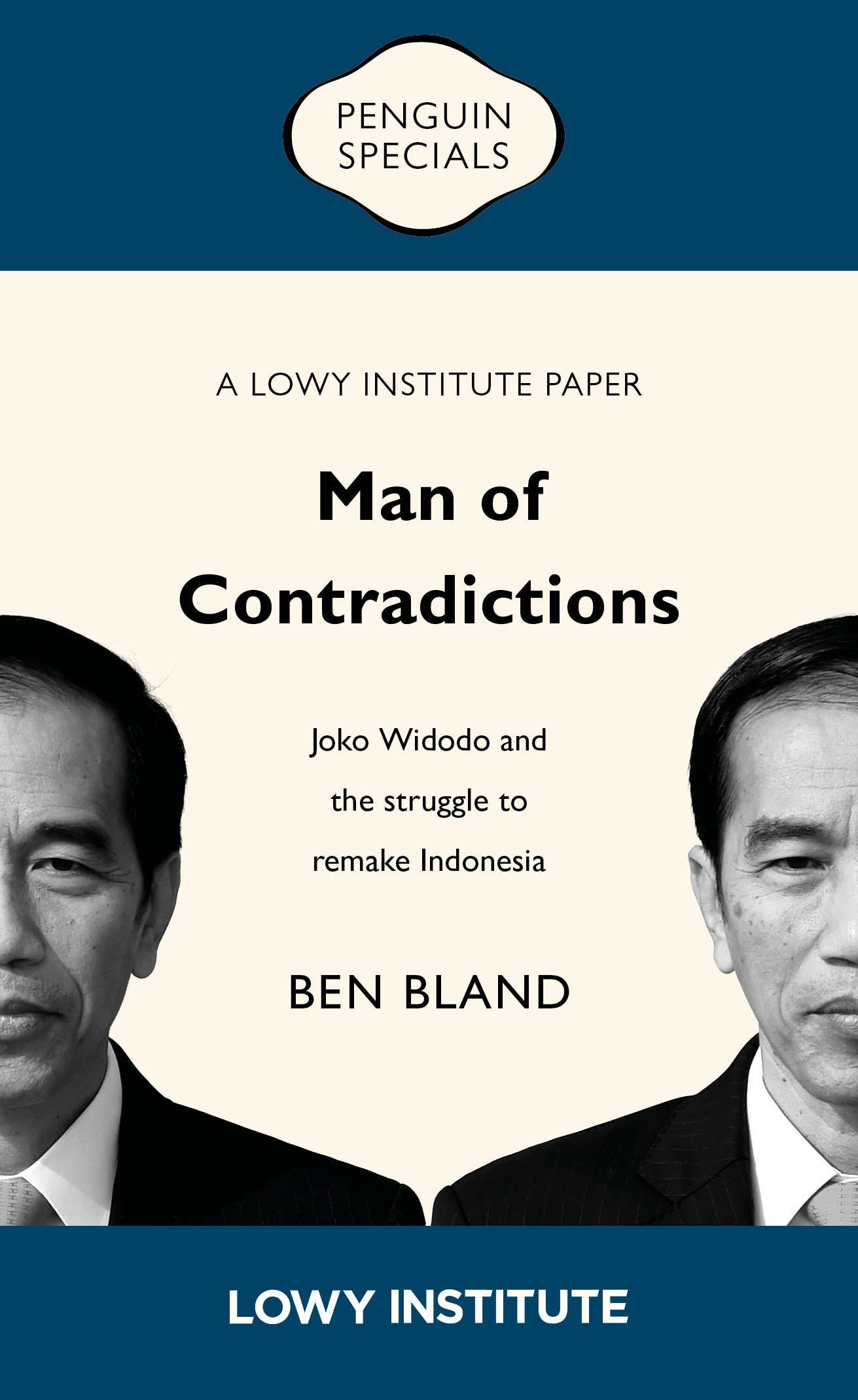 Man of Contradictions is available for purchase from 1 September 2020 from all good bookstores, and as an e-book.

Ben Bland is Director of the Southeast Asia Program at the Lowy Institute. Ben was previously an award-winning correspondent for the Financial Times in Indonesia, China and Vietnam. His first book, Generation HK: Seeking Identity in China’s Shadow, was acclaimed for its prescient insights into the deepening political crisis in Hong Kong.

“A richly textured and nuanced treatment of the Indonesian leader Jokowi. Ben has drawn upon his considerable knowledge of Indonesia and the region to produce an indispensable guide to a critical yet often misunderstood leader and nation.” – Kurt Campbell, former US Assistant Secretary of State for East Asian and Pacific Affairs

“A sharp critique that deserves to be heard. From the point of view of a keen observer like Ben Bland, we can better understand Jokowi and, ultimately, better understand Indonesia's complexities.” – Wahyu Dhyatmika, editor-in-chief, Tempo magazine

“The book is quite brilliant in capturing the limits of a man’s ability to challenge and reform from within an entrenched political system.” – Una Galani, Reuters

“A timely contribution to the discussion of Indonesian contemporary politics so that we do not keep ‘getting Indonesia, and Jokowi, wrong’.” – Yanuar Nugroho, former deputy chief of staff to President Joko Widodo

“A landmark new book. It should be required reading for anyone seeking to understand the leader of Australia’s giant northern neighbour.” – James Massola, Sydney Morning Herald

“An excellent book.” – The Economist

“Ben Bland’s penetrating biography of Indonesia’s Jokowi not only clarifies his subject’s contradictions, it does so in sparkling prose.” – Milton Osborne, historian and author of Southeast Asia: An Introductory History

“The book offers vivid glimpses of Jokowi as he grappled with the challenges of leading one of the most diverse and complex nations in the world.” – Michael Vatikiotis, author of Blood and Silk: Power and Conflict in Modern Southeast Asia

“An accessible introduction to the country’s most well-known and powerful politician… Bland brings to bear a wealth of personal experience covering Indonesian politics over the past decade.” – Professor Thomas Pepinsky, Council on Foreign Relations

“Highly readable … Bland is performing excellent service by introducing Indonesia to what, it’s to be hoped, is a new set of readers.” – Professor Edward Aspinall, Australian National University

“Bland is a good writer.” – Richard Borsuk, The Jakarta Post

The Mekong: River under threat
Top