The country that isn’t a country might one day reunify with the PRC, of which it was never a part. That’s just a start. 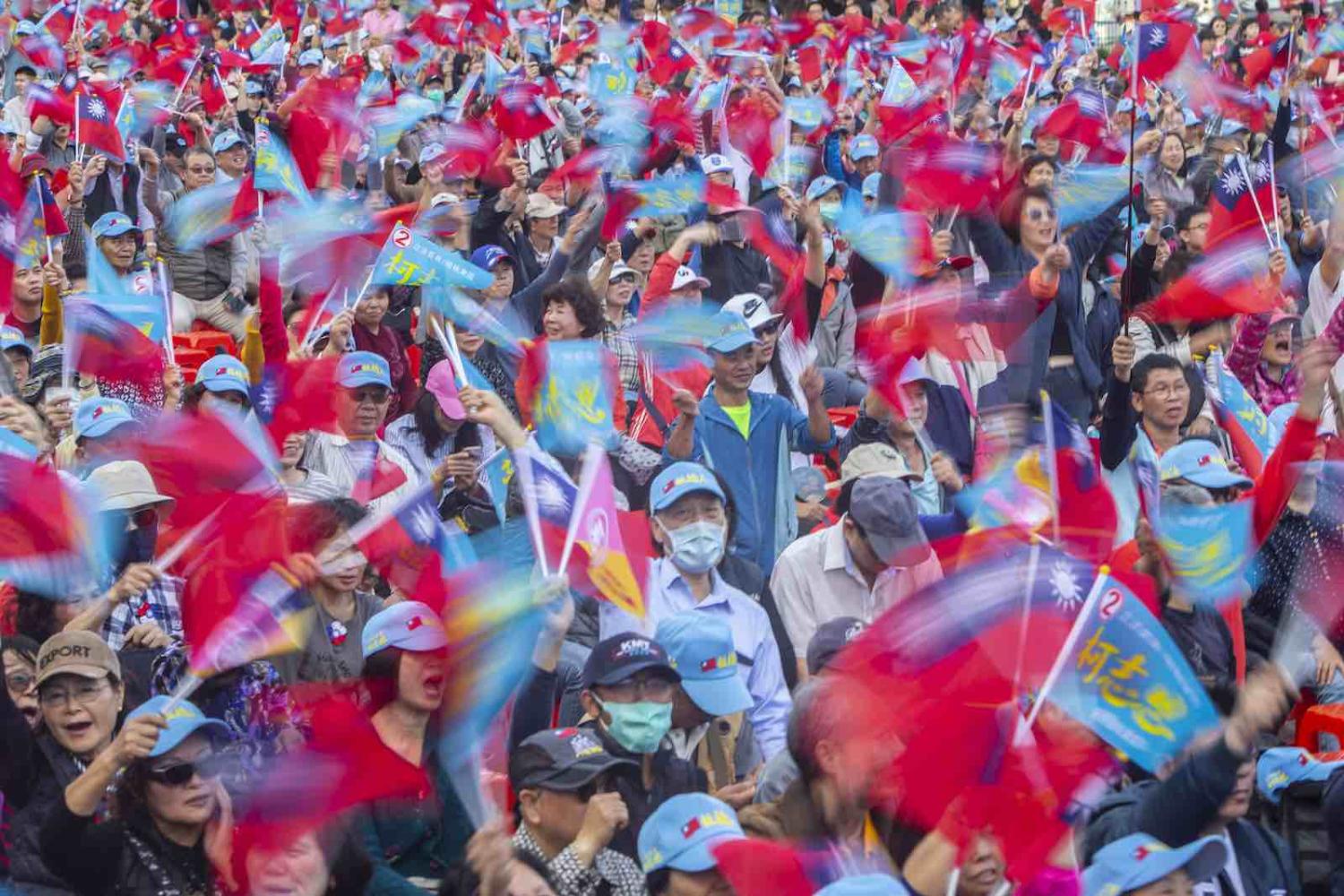 If you were to receive a receipt in Taiwan today, the date would be marked with the year 109. It will be 109 when Taiwan holds its presidential and legislative election in what we might call 2020. That’s because it marks 109 years since the declaration of the Republic of China (ROC), the state created in the first Chinese Revolution in 1911.

This is just the first of many absurdities that mark the political existence of Taiwan. In 1911, when the republic was declared, Taiwan was not part of China but known as Japanese Formosa, a colony. And in 1945, after Japan lost the Second World War, and Taiwan with it, the Kuomintang (KMT) took over Taiwan and its 6 million residents. The KMT fled to the island four years later upon its defeat in the Chinese Civil War.

The KMT is left struggling for a response. Its history and identity is steeped in being a Chinese nationalist party. But fewer Taiwanese identify as Chinese every year.

The KMT believed it would one day retake mainland China, and the ROC constitution that governs Taiwan – which was Japanese when the constitution was written – continues to reflect this outdated belief. Any move to adjust the constitution to reflect Taiwan’s political reality would be treated as a provocation by Beijing.

Fifteen countries officially recognise Taiwan as an independent country, but the United Nations has accepted that Beijing, as the capital of the People’s Republic of China (which has never controlled Taiwan), speaks for the island. Herein lies another absurdity: 23 million citizens travel the world on a Taiwanese passport – which is far more widely accepted than a Chinese passport, for example – but they cannot enter a UN building with one, even as a tourist.

The absurdity plays an outsize role in Taiwan’s international relations. Taiwan’s closest economic partner is China, which receives about 40% of its exports. The same China that is an existential threat to Taiwan, and intends to annex it. Washington does not recognise the Republic of China, yet Taiwan is the 11th-largest trading partner of the United States, it ranks as the world’s 22nd-largest economy, and it plays an indispensable part in global supply chains, including those through Silicon Valley. The US is even bound by the Taiwan Relations Act to furnish Taiwan with arms to defend itself.

All the diplomatic infrastructure that comes with an independent sovereign nation is relabelled in the case of Taiwan. The Ministry of Foreign Affairs cannot have a relationship with Beijing, because Beijing is not “foreign” (it is). So Taiwan has a Mainland Affairs Council (MAC) instead – one of the running jokes in Taiwan is that the MAC is the cushiest job in government, because Beijing cut off official contact in 2016. This gallows humour hides a darker truth: many of the 1 million Taiwanese who live and work in mainland China have little or no support in a crisis. China has at times refused to allow consular assistance and failed to notify Taiwan when its citizens are detained, and their families in Taiwan essentially have no legal recourse to assist their loved ones.

In going to such great lengths to preserve this absurdity, even everyday language shifts with Beijing’s efforts to airbrush Taiwan’s existence. When in Beijing, you are expected to say “cross-straits relations” and not “China-Taiwan relations” (which would imply that Taiwan is a country). You can refer to Taiwan’s position towards the mainland, but not towards China, because that would imply that the two were separate.

The 2020 election, while largely fought along the lines of Taiwan’s fraught relationship with China, continues to reflect the different visions that the two major parties have for Taiwan.

But then you get off the plane in Taipei, just three hours away, and you refer to the mainland and some young people will think you mean the island of Taiwan, as opposed to its smaller islands of Matsu and Penghu. In China, you feel as though Taiwan is only a step removed from Hong Kong, but in Taiwan, you find yourself in an independent nation with its own elections and legislature and military.

As I have said before, the disconnect between the international and local discourse about Taiwan is in part the success of China’s narrative about what it calls the “reunification” of China. International news reports frequently claim that Taiwan broke away from the mainland at the end of the Chinese Civil War in 1949. Beijing has shaped international discourse to the extent that many observers will talk about China’s plans to “reunify” or “retake” Taiwan, without acknowledging that Taiwan has never been a part of the People’s Republic. China’s so-called claim dates to when parts of Taiwan were a prefecture and then province of the Qing Empire.

Taiwan’s complicated history has broader ramifications for the identity of the island. As I argue with Richard McGregor in a new Lowy Institute analysis, the 2020 election, while largely fought along the lines of Taiwan’s fraught relationship with China, continues to reflect the different visions that the two major parties have for Taiwan.

The KMT, the party founded in China and which retreated to Taiwan after it lost, continues to talk about the ROC. This doesn’t mean that the KMT is a fan of communism, but that its official line is that China will one day be unified when Beijing looks a little more like Taipei. One KMT adviser said to me in Taipei this summer: “We just need to see who can hold our breath for longer”. In the meantime, the KMT’s appeal to the people is that it has closer ties to Beijing, and KMT access to China’s burgeoning market will make Taiwan rich.

But when the KMT retreated to Taiwan, it imposed martial law, persecuted local elites, and attempted to impose a Chinese nationalist ideology on a population that had been educated under Japanese rule. The KMT occupation quickly sparked resentment, and in doing so, gave rise to an independence movement in which today’s ruling Democratic Progressive Party (DPP) has its roots.

In the 2020 election, the quasi-ethnic dividing lines are drawn between the KMT and the DPP — Chinese versus Taiwanese identity — as they have in most presidential elections. Incumbent President Tsai Ing-wen brings up the months of protest in Hong Kong at every opportunity – in part to remind Taiwanese of their longstanding opposition to “one country, two systems”, the model that governs Hong Kong but was initially devised for Taiwan. But she also calls on her people to stand together to ensure their country’s survival – her attempt to overcome the rifts that colonisation and authoritarian rule have left on Taiwan. Tsai talks about the many forces that have shaped Taiwan: indigenous, Japanese, Dutch, American, and Chinese.

The KMT is left struggling for a response. Its history and identity is steeped in being a Chinese nationalist party. But fewer Taiwanese identify as Chinese every year. Only one in ten Taiwanese want to be unified with China, and many of those are accounted for by Chinese or Chinese-born residents of Taiwan.

The KMT is in an unenviable position as the custodians of the Republic of China. But the unloved republic cannot be escaped: Beijing threatens to attack if Taiwan formally declares independence. And the KMT’s own internal divisions wouldn’t allow it to stop propagating this absurdity, maybe even if Beijing somehow made it possible to alter the status quo.

The result is that the more that the People’s Republic represents being Chinese, the less Chinese the people of Taiwan feel. And the legitimacy of the KMT with many Taiwanese is strained. This hasn’t been helped by a disastrous campaign by the KMT candidate, Han Kuo-yu, and an even worse party list for the 2020 election.

In the likely event that Tsai is re-elected and maintains the DPP majority in the legislature, the absurdities will continue. China’s General Secretary Xi Jinping can respond in three ways: quietly resuming cross-strait talks, maintaining the status quo, or increasing pressure on Taiwan. An invasion is not likely, but there are many measures short of war that can be employed, including disinformation to sow distrust and undermine Taiwan’s institutions.

But there are still many reasons to be fearful. Observers often claim that Beijing can be patient when it comes to Taiwan, though Xi himself has said that the “Taiwan problem” is not one that should be handed down from generation to generation. Certainly Taiwan’s foreign minister Joseph Wu is less sure: he says Taiwan needs to prepare for the worst. And what about the patience of the people of Taiwan for their absurd status? How long can they be expected to live in a democratic country that is at the behest of larger powers?

So much of Taiwan’s geopolitical status is defined by this absurdity and ambiguity. But one thing is clear: the 2020 elections are about the Taiwanese people – those who lived in the shadow of a superpower and threw off authoritarianism and embraced liberal freedoms. They created an economic and political miracle, and they built a democracy. That is something worth fighting for.

The snub demonstrates Beijing now has another diplomatic tool in its arsenal.
Melissa Crouch 18 Apr 2019 13:00

It is time to put Indonesian back on the priority list of languages to be studied in Australia.
Madeleine Nyst 30 Nov 2020 13:00

By refusing to concede an election he has lost, the American president further undermines faith in the system.