Accountability for flight MH17: a long and winding road …

Trials in absentia are problematic, but as with the Lockerbie trial, the quest for justice will be arduous and complex. 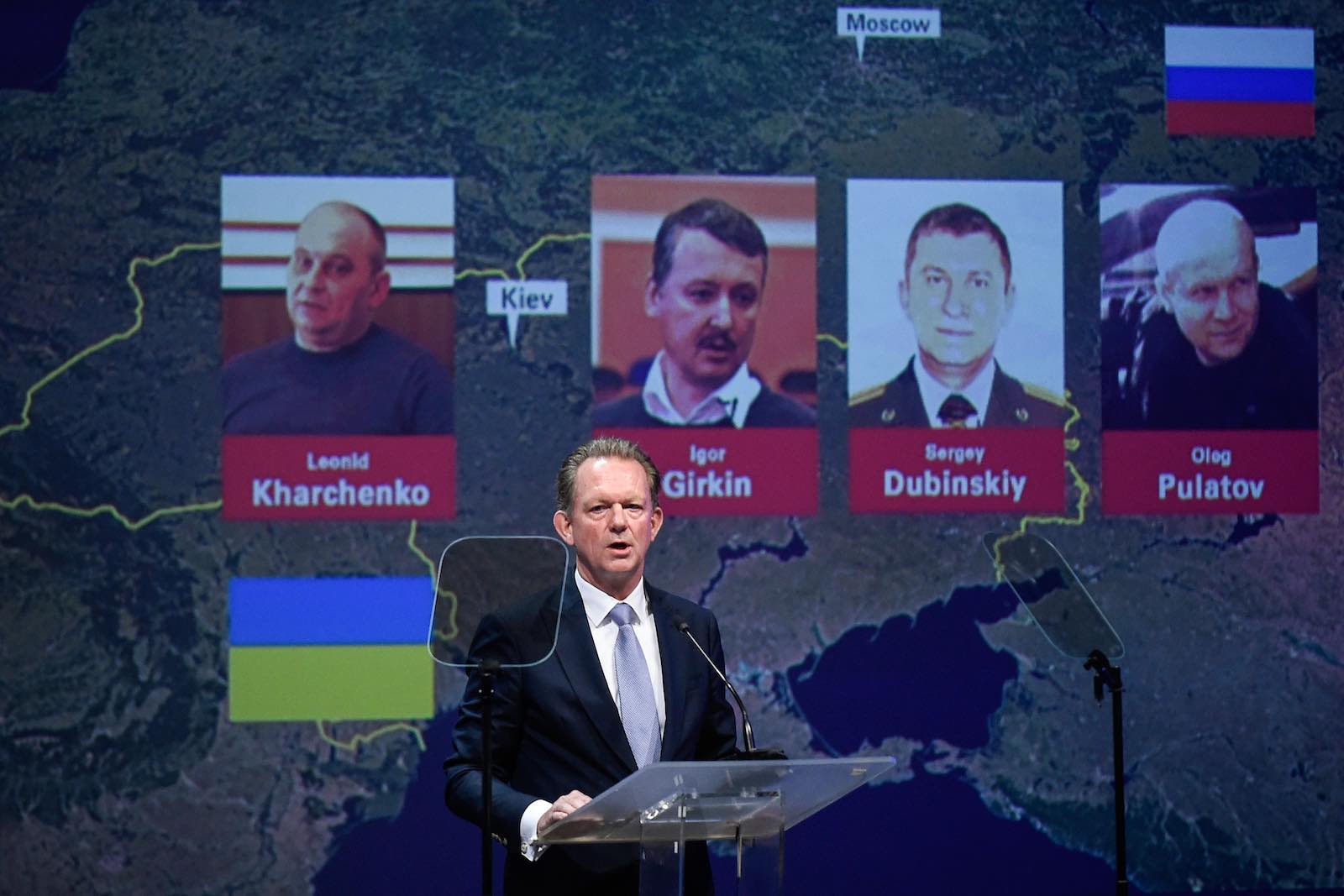 Fred Westerbeke of the Netherlands National Prosecutor’s annouces charges against three Russians and a Ukrainian over the downing of MH17 (Photo: John Thys via Getty)
Published 21 Jun 2019 06:00   0 Comments       Follow @PillaiPriy

On 17 July 2014, Malaysian Airlines flight MH17 was shot down over Ukraine, and 298 people were killed. The majority of the fatalities were Dutch citizens, followed by those of Malaysian and Australian nationality.

A Joint Investigative Team (“JIT”) was established with members of five countries to conduct a criminal investigation into the cause of the downing and to assess responsibility. Yesterday the JIT held a press conference, sharing some findings of their investigation so far, and declared the intention to prosecute those responsible for the shooting down of the civilian aircraft.

In brief, some of the findings were as follows: that the transport and shooting of the “Buk” missile system fired at the plane could be attributed to the 53rd brigade of the Russian army. Given the lack of access to the area in Ukraine, the investigation will continue and the JIT issued a fresh call for witnesses to come forward.

The most significant aspect of the latest announcement, however, was the decision to commence prosecution proceedings.

The JIT named four individuals, for whom international arrest warrants are to be issued. Three are Russian – Igor Girkin, Sergey Dubinskiy and Oleg Pulatov – and Leonid Kharchenko is Ukrainian. They are all alleged to have taken part in the armed conflict in eastern Ukraine. The JIT emphasized their regular contact with Russian officials, and that they were links in the chain that enabled the transport of the missile.

While prosecution proceedings relate to individual culpability, the bigger picture is the alleged role of Russia and imputing responsibility on the state.

According to the JIT, while these individuals did not “press the button themselves”, they collaborated to enable the shooting of the missile, which is just as punishable under Dutch criminal law. Therefore, the decision has been made to prosecute these individuals for causing the crash, and for murdering 298 passengers under Dutch law. The JIT allowed for the possibility that while the intended target may have been a military airplane, it would still not absolve the suspects of responsibility for the downing of MH17.

The JIT requested Russia and Ukraine to submit summons to suspects and to question suspects. Due to a prohibition on extradition in both countries, a request for mutual legal assistance is to be filed. The JIT brought up the problem of access, with the refusal of Russia to answer questions thus far and the wish to hear from the suspects directly.

Despite these hurdles, criminal proceedings are to commence on 9 March 2020 in The Hague, with agreement by the five countries to Dutch law and court. In a problematic approach, the criminal trial is to continue on in absentia if the suspects do not appear.

The findings and decision to move ahead with the prosecution warrants a few observations on what this means in the broader legal context.

On the decision of the JIT yesterday, the individuals to be prosecuted are relatively lower down in the chain of command and did not shoulder significant command responsibility. Therefore, arguably those with more culpability and who gave the orders are still protected.

On the troubling question of in absentia trials, clearly this is an option that is permitted under Dutch law. However, this sits uncomfortably within the framework of fair trial and due process rights, besides the optics of such a trial. While it may not be the preferred course of action, clearly this is influenced by the inability to extradite and the lack of political will to cooperate in any way with the investigation and prosecution.

While prosecution proceedings relate to individual culpability, the bigger picture is the alleged role of Russia and imputing responsibility on the state. This has legal ramifications, including asking for reparations from the state and holding its functionaries to account. Arguably, the evidence collected which will be revealed in the course of the prosecution proceedings may lay the groundwork for legal venues for state responsibility. One such avenue may be the International Court of Justice, based on violations of treaties, such as the Montreal or Chicago conventions.

There are a few parallels in relation to the legal issues from the Lockerbie trial for the bombing of Pan Am flight 103 in 1988. One such is the refusal to extradite by Libya, and the role of the UN Security Council in bringing pressure to bear – which in this case is not an option given Russia’s role and veto power. (For the background legal context leading up to the Lockerbie trial, see here; and for an analysis of the verdict, see here.) The International Court of Justice was also approached by Libya and ruled that it had jurisdiction to proceed with the case – before the proceedings were terminated by the agreement of all parties.

And of course, it is worth also remembering the role of economic sanctions in bringing pressure to bear. What the Lockerbie trial indicates is that there were multiple legal avenues that were tried and concurrently – some acting as pressure in the handing over of the suspects and the eventual trial.

As a last – but not least point – the wishes of the families of the victims and their perspective is important, including the ability to demand reparations. There is a long road ahead in the demand for justice and accountability – and the green light for these proceedings, while a significant step and an end in itself, does not preclude other legal avenues building on the work already undertaken.

While the commencement of this trial may be less than ideal, it could however also serve as leverage for other proceedings, including potentially state arbitration, civil suits, and international court proceedings (potentially the International Court of Justice and the European Court of Human Rights, but unlikely to include the International Criminal Court given the commencement of domestic proceedings). For the families of those who perished, there is still an arduous road ahead.