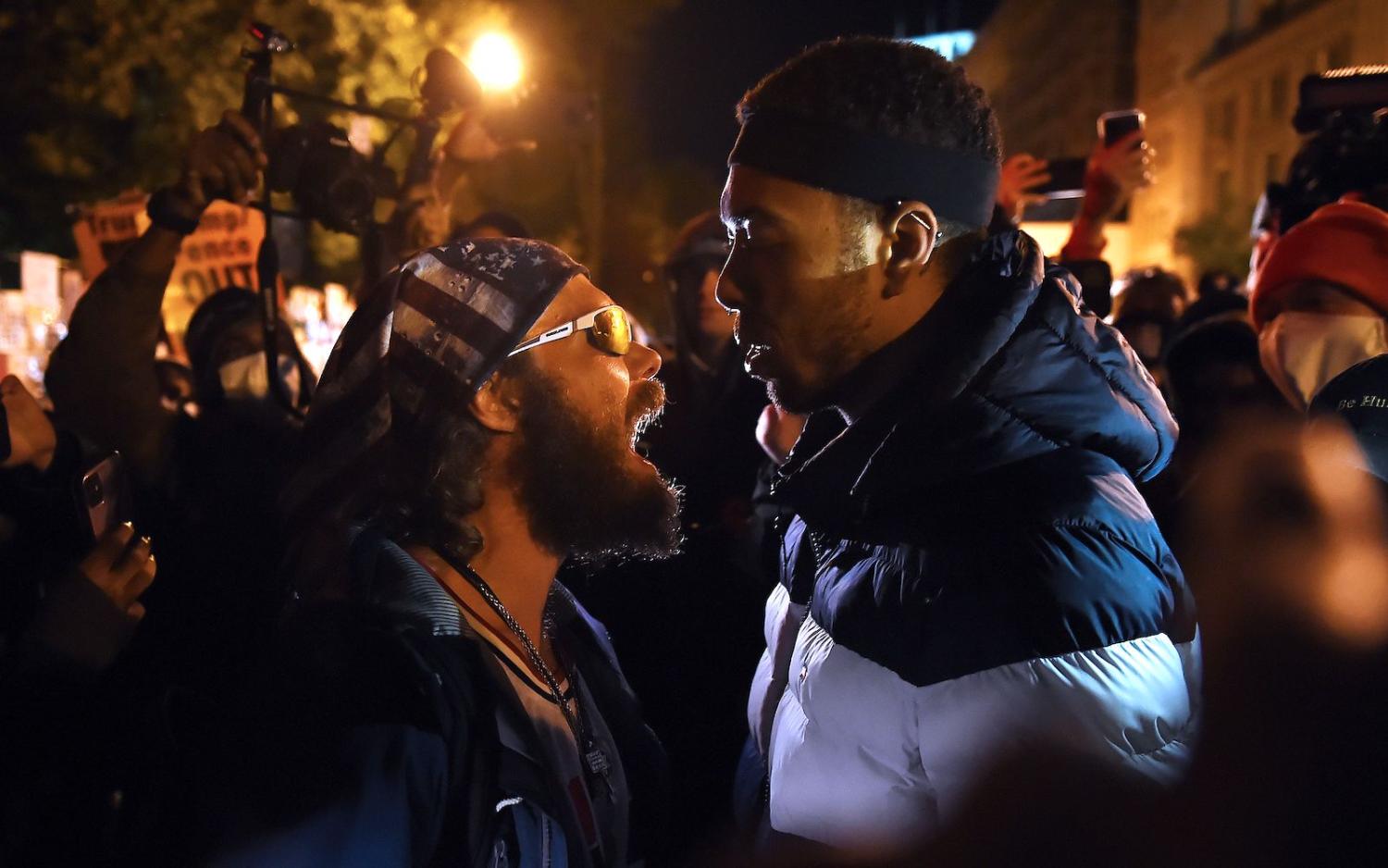 A Trump supporter (left) clashes with a demonstrator at Black Lives Matter plaza, across from the White House in Washington, DC, on 3 November 2020 (Olivier Douliery/AFP via Getty Images)
Published 11 Nov 2020     Follow @erinehurley

Over the course of the Trump presidency, it has been possible to isolate political moments and assess their meaning. But it has been difficult to tell a coherent story about the state of American politics since 2016. Noise, acrimony and emotion are constants in modern America, but living with Donald Trump as President has been a singular experience.

Rebecca Solnit said it best when she described four years of Trump as:

… being locked in a room with an unhinged assassin; you felt you could never take your eyes off him and his minions, that at any moment something yet more horrendous and transgressive might erupt.

When election day extended into a multi-day loop of minor updates to county-level results, the majority of Americans who voted against Donald Trump still felt trapped, but the company had improved. Earnest, non-partisan local government officials were carefully counting votes and carrying out the tedious business of democracy. Five days later, the race was called for Joe Biden after he won the state of Pennsylvania. This development brought resolution and relief to many, and the existence of tangible electoral results has provided some much-needed clarity.

Both parties experienced record turnout in the 2020 election. An estimated 159 million Americans voted; this number represents more than two thirds of eligible voters and establishes 2020 as the highest turnout, proportionally, since 1900. Former Vice President Joe Biden won the popular vote by more than four-and-a-half million voters, and when the counting is completed, he is likely to end up with a sizeable Electoral College victory.

Denying Trump a second term represents a major accomplishment for the Democrats. It has been 28 years since an incumbent president was defeated. And in the context of an international environment in which strongmen and populism are on the rise, Americans have, through the democratic process, defeated an anti-democratic leader. Susan Glasser accurately referred to Trump’s defeat as “…the Death Star being blown up”, an achievement worth celebrating despite the likelihood that another Death Star will emerge in the future.

The rallying cry of the resistance – “This is not who we are” – proved inaccurate. Trump is, at least in part, who Americans are.

But the 2020 election was close in key swing states, and the predicted Democratic landslide failed to appear. The Democrats did not win a majority in the Senate on Election Day, despite expectations. They lost seats in the House, and Trump (based on 2016 results) overperformed in many places, delivering strong Republican returns on down-ballot races, including state legislatures. Gains with white working-class voters in the Midwest and suburban voters, combined with the strength of African-American turnout in cities is the most likely explanation of Biden’s victory.

The absence of a “blue wave” makes it possible to tell a story about progress and American politics that is likely closer to the truth than the story many Americans told themselves during the Obama era.

The results suggest that the progress that has occurred over the past four years has only had a marginal effect on electoral gains. Consider the suburban white women who recently became politically active in the Democratic party. Following the murder of George Floyd, many of them took to the streets carrying signs that proclaimed, “All mothers were summoned when George Floyd called for his mother.”

Their increased participation represents a step in the right direction for American democracy, but the electoral work has just begun. Biden improved on Hillary Clinton’s vote share in the suburbs, and Trump did not do as well in the suburbs as he did in 2016.  But these shifts were far less dramatic than expected.

Republican donors have, over the course of decades, built an interlocking system focused on protecting electoral gains. Even with demographic changes and Trump as the standard-bearer for the Republican party, Democrats are playing catch-up here.

The 2020 electoral results establish that 2016 was not a fluke. More than 71 million Americans voted for Donald Trump after getting the chance to get to know him. The rallying cry of the resistance – “This is not who we are” – proved inaccurate. Trump is, at least in part, who Americans are.

Further, the election results did not signal a major comeuppance for a president who downplayed the threat posed by the coronavirus, and then mismanaged the response to a pandemic that has so far produced a death toll of 237,000 Americans. Heidi Heitkamp, a former Democratic Senator from the conservative state of North Dakota suggested that it’s likely “Covid cut both ways”, with Republicans viewing the Biden campaign’s strict adherence to precautions as preachy and judgmental.

Americans have been moving apart from one another geographically and ideologically for decades. There is a tendency to focus on the make-up of the opposition, whether it be anti-war protesters or the Tea Party or the Squad, but this is a distraction. The 2020 electoral results serve as a reminder that the depth and breadth of the divide matters more than how it manifests itself at a given moment.

If the country is not decisively headed in one direction or another, then it is incumbent on Americans to find ways to live together. This process is likely to be exhausting and infuriating, but for Biden supporters, it is a dramatic improvement on being locked in a room with an unhinged assassin. No one expects Trump to go quietly, and there’s reason to worry about how he’ll behave over the next 70-odd days. But he was immediately diminished by the result, and he is losing power in Washington with every day that passes.

An entertaining and informative memoir about a woman’s career through a deeply patriarchal profession in diplomacy.
Erin Cook 14 Jul 2021 10:00

Thailand’s holiday island Phuket is trialling vaccine tourism in a bid to recover from the Covid-19 wave.
Teesta Prakash 19 Aug 2019 15:00

India’s Prime Minister appears set on a renewed mission to woo the neighbours – bar one – into seeing the world his way.