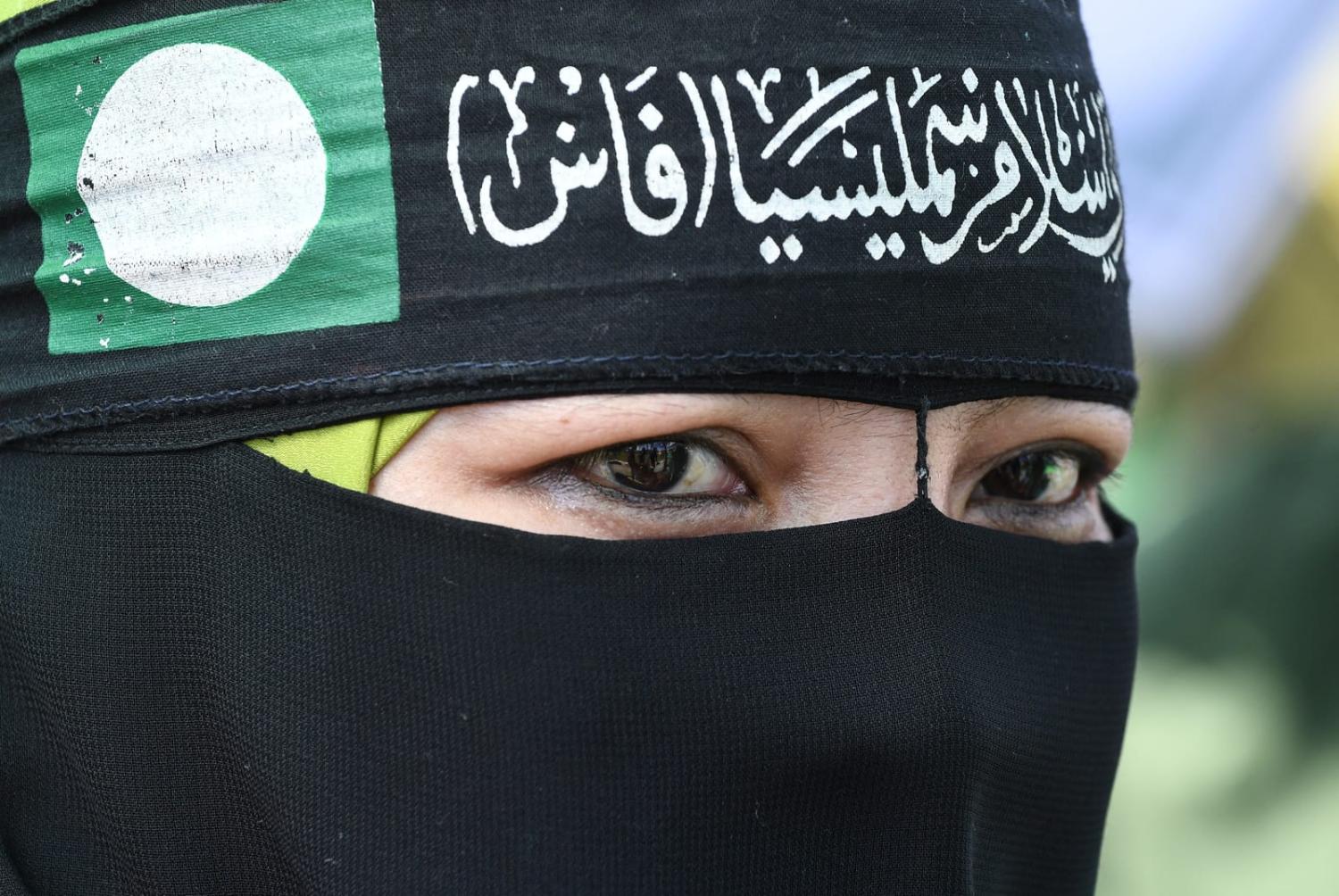 Malaysia’s fundamentalist Parti Islam Se-Malaysia (PAS) stunned the country when it won the most seats in parliament at last month’s election, ousting big name politicians including Prime Minister Anwar Ibrahim’s daughter Nurul Izzah in a constituency that has been held by him and his family since 1982.

The popular and well-respected Nurul had won the Permatang Pauh constituency in Penang at the 2018 general election with a majority of more than 15,600. This time round, she lost to a PAS cleric.

Anwar’s ascent to the PM’s job after a career of extraordinary setbacks has gathered most attention internationally – his daughter’s loss the obvious sour note – but the success of PAS has been a victory that was decades in the making.

PAS won 49 seats, the most of any individual party and almost a three-fold increase from 2018 polls in the 19 November general election.

Founded in 1951, the party’s lifelong struggle is to replace Malaysia’s democratic system with shariah law. The PAS stronghold lies in the east coast states of Kelantan and Terengganu but has now expanded to Kedah and Perlis. It draws its inspiration from Islamist parties around the globe – Egypt’s Muslim Brotherhood, Indonesia’s Masyumi Party and Pakistan’s Jamaat Islami.

The exclusivity of PAS doctrine has created an “us and them” mentality.

The spread of PAS influence in Malaysia accelerated 20 years ago through the proliferation of thousands of schools for all age groups either owned by the party or its staunch supporters, according to former PAS Vice President and senior Muslim cleric Ahmad Awang.

PAS-linked kindergartens, tahfidz (Quran memorisation schools) and Islamic schools are spread across the country, reaching as far as Sabah and Sarawak states on Borneo Island, which has large Christian and animist communities.

In PAS strongholds in the states of Kelantan and Terengganu, meat from cows, chickens and goats slaughtered by Muslims who are not part of PAS is considered “haram” or forbidden. Malay Muslims – who are not PAS supporters – are viewed as infidels. The exclusivity of PAS doctrine has created an “us and them” mentality. The “outsiders” and so-called infidels comprising non-PAS Muslims and non-Muslims represent a dangerous divide in multi-racial and multicultural Malaysia.

Malaysia has thrived and grown into an upper middle-income country because of its diversity.

Ahmad, 87, a graduate of Islamic studies from Al-Azhar University in Cairo, was himself branded an infidel when he left the party to join Amanah, a moderate Muslim party where he serves as an adviser. Amanah is a member of the Pakatan Harapan (PH) coalition led by Anwar Ibrahim.

It did not just stop there. Ahmad, a former director of the government’s religious affairs department, has also been stopped from preaching in mosques controlled by PAS in Selangor state.

Many of the PAS-linked private Islamic schools are set up by Malaysian students who returned home from the Middle East, in particular those from Jordan and Egypt. As Malay Muslims become more religious, many of them sign up to these schools, which are ubiquitous in urban areas, operating out of rented space in commercial buildings in city centres.

In the survey, 82 per cent agreed that the Quran should replace the country’s constitution, up from 72 per cent in 2010.

The number of returnees is huge, given that Malaysia has been sending students to the Middle East since the 1970s. Malaysian students in Cairo, including some on government scholarships, have expressed support for PAS and shunned the ruling United Malays National Organisation (UMNO) because it rules according to a constitution “that is not based on shariah law”.

The PAS struggle to turn democratic Malaysia into a theocratic state has taken root. In June this year, Malaysian pollster Merdeka Centre published a “Muslim Youth Survey 2022”, in which face-to-face interviews were conducted with 1,200 Muslim youths aged between 15 and 25. In the survey, 82 per cent agreed that the Quran should replace the country’s constitution, up from 72 per cent in 2010.

Those surveyed also believed in complete obedience to religious figures, with 72 per cent expressing the view that “true Muslims” should follow the words of religious leaders/scholars and “obey them without question”. The survey also found the number of Muslim youths attending religious schools has jumped, rising to 60 per cent in 2022, up from 48 per cent in 2010.

Current PAS president Abdul Hadi Awang has been pushing for the expansion of the Islamic penal code known as Hudud law to mete out harsher punishments for Muslims in the states of Kelantan and Terengganu where it rules. In Kelantan, cinemas are banned, while in Terengganu state, two women were publicly caned in 2018 after being accused of being in a same-sex relationship.

Malaysia has a dual-track legal system, with Islamic criminal and family laws applicable to Muslims running alongside civil laws.

The Islamisation of Malaysia’s education system since the 1980s has helped shaped the conservative outlook among many Muslims, who make up some 69 per cent of the nation’s 30.2 million-strong population.

A combination of domestic factors, Islamic revivalism on local university campuses, and the Middle East influence brought back by hundreds of thousands of returning students, have helped propel the shift. In addition, the 1.4 million new voters after the voting age was lowered to 18 from 21, where the majority are Malay Muslims, are widely believed to have voted for PAS and its partner Bersatu under the Perikatan Nasional (PN).

Perhaps as a sign of future instability, the fiercest attacks from PAS/PN were directed at Anwar Ibrahim’s Pakatan Harapan.

PAS victory came at the expense of UMNO, the biggest party in Barisan Nasional (BN), which ruled the country since independence from Britain in 1957, save for the period 2018–2020 when Pakatan Harapan was in power.

The majority of Muslim Malays has long voted for UMNO. But not this time round. The mighty UMNO/BN saw its votes whittled down to a mere 30 seats in the 222-seat parliament.

PAS/PN vigorously attacked UMNO as a party stained with corruption where its president Zahid Hamidi is currently standing trial on corruption charges and its former prime minister Najib Razak is currently serving a 12-year jail sentence for corruption.

Perhaps as a sign of future instability, the fiercest attacks from PAS/PN were directed at Anwar Ibrahim’s Pakatan Harapan (PH), accusing the coalition of being controlled by its partner, the Chinese-based Democratic Action Party (DAP), and stating that if PH wins, the country would be run by the Chinese, the call to prayer in mosques would be banned, and same-sex marriage would be legalised.

The relentless anti-PH rhetoric was spread via TikTok videos.

None of the accusations is true but the scaremongering appeared to have worked. Ethnic Malays started expressing fears about being ruled by Malaysian Chinese “who are communists” and who would ban the call to prayer in mosques.

When the election results were announced, PH together with its ally MUDA party won the most seats, 82, but failed to achieve a simple majority to form the government. It has since teamed up with its old foe BN (30 seats) and a Sarawak coalition of parties named Gabungan Rakyat Sarawak (GRS) with 23 seats, and Sabah-based Warisan (3 seats) to form government.

Muslim cleric Ahmad believes PAS has become intolerant under the leadership of the current PAS president Hadi Awang, whom he described as very “extreme” and harsh. Hadi was previously “accommodating,” he said, but has since changed.

Hadi Awang stands in sharp contrast to his predecessor, the late Nik Abdul Aziz Nik Mat, a Muslim cleric revered and well-loved by many, including the Chinese community in his hometown. Nik Aziz was known for his tolerance and graciousness, even to his political opponents. He passed away in 2015.

PAS/PN will pose a serious challenge to Anwar Ibrahim and his government. PAS/PN has the numbers and the demography. They have also shown they will not hesitate to use the race and religion cards.

Malaysia’s political stability and potentially its way of life are at stake.

Ahmad urged for reforms to the education system so that PAS-linked religious schools are a seat of Islamic learning with an emphasis on justice, mercy and humanity and not a place where political propaganda is added into the mix.

The clock is ticking.

Previous Article
Supporting the kind of region we want
Next Article
Economic diplomacy: Scoring goals outside the stadium

Past “gentlemen’s agreements” aside, deciding the next World Bank chief is not the sole prerogative of Donald Trump.
ML Cavanaugh 20 Jul 2017 15:25

Those of us on the line would appreciate some tangible help in holding back the world’s worst nuclear problem; not just empty words and slogans.
Nick Bryant 13 Dec 2016 11:57