The Asian Development Bank at 50: A spent force?

The Asian Development Bank was once an indispensible institution and should seek to be so again. 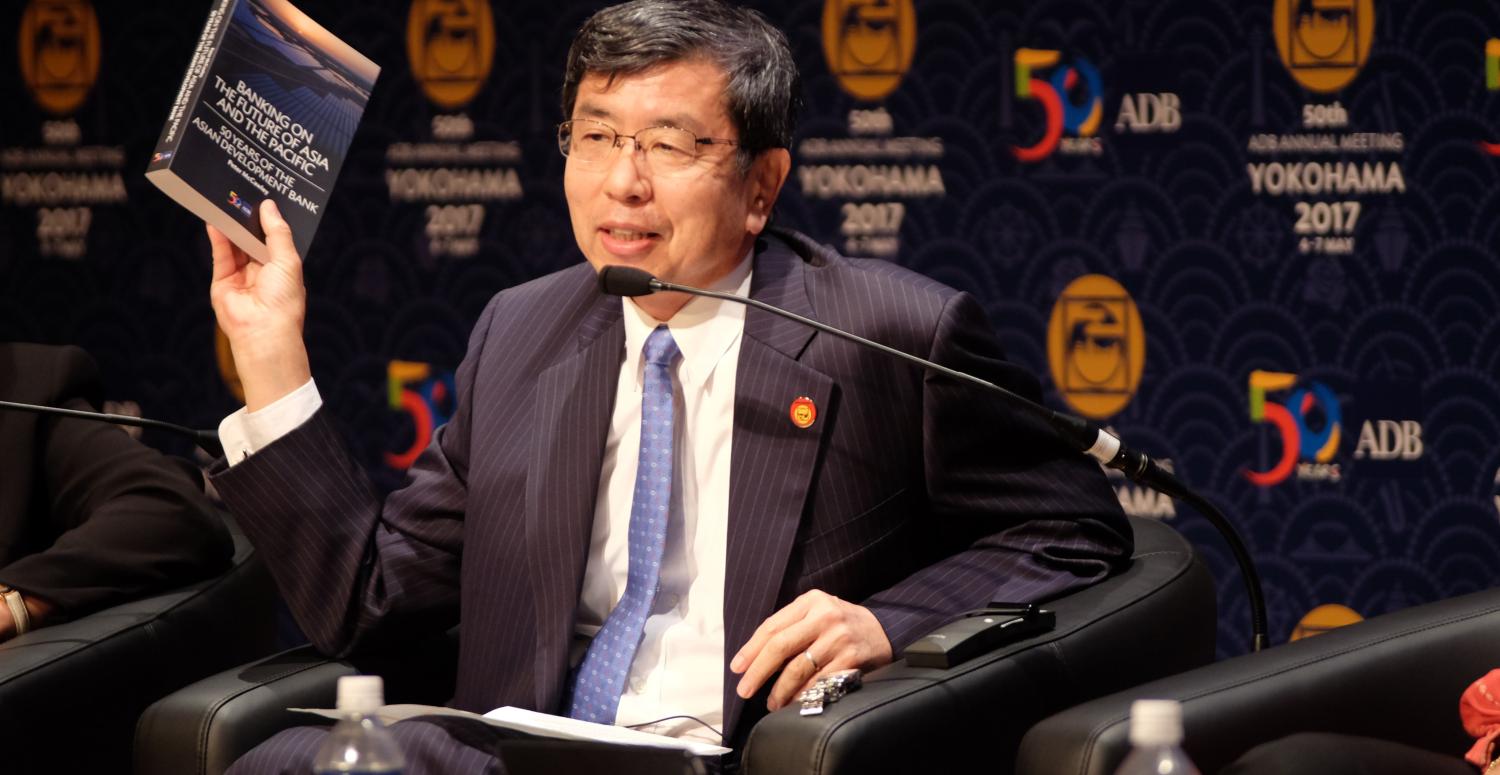 In May, the Asian Development Bank celebrated its 50th anniversary with a big bash in Yokohama. Senior ADB figures repeatedly pointed to the record crowd of more than 6000 attendees as evidence of the meeting's success and the ADB's enduring relevance. Not all of the 6000 were convinced.

If there was one message from the ADB meeting it was, as one Director General quipped, 'read the book'. At every turn, in formal presentations, seminars and panel discussions, President Takehiko Nakao spruiked the 500-page ADB history Banking on the Future of Asia and the Pacific: 50 years of the Asian Development Bank.

ANU Asia stalwart and Interpreter contributor Peter McCawley has produced an erudite, meticulously researched account of the ADB's formation and history that is indeed a valuable read. But making McCawley's history the main message of the ADB's 50th annual meeting risked being seen as indulgence. It could be fairly argued that the ADB did not use the publication to focus sufficiently on future challenges for the region and the ADB (on this subject, see also the Lowy Institute's Strengthening the Asian Development Bank in 21st Century Asia).

Given the international context, both the meeting agenda and key statements lacked a sharp focus on preserving openness as the bedrock of Asian prosperity. While the changing balance of power in the region was the elephant in every room, it was rarely even alluded to.

All of this goes to the role of the ADB, and especially its future role. McCawley rightly points to the fervent desire of the ADB's originators to create an Asian institution that can respond in unique ways to country and regional needs. This is still a key strength of the ADB, but, in a globalising world, a diminished one.

It will diminish further if the ADB has a limited and dated vision of its regional role. Historically, the ADB has been creative and highly effective on a regional level. It has provided the master plans and the hardware for much a greater level of physical connectivity that has underpinned Asia Pacific trade and investment growth. It has developed new financial instruments and forms of cooperation to protect countries against financial shocks. In times of crisis, from earthquakes and tsunamis to the global financial crisis, it has moved extremely fast and effectively to mobilise large volumes of support. The ADB has also helped create sub-regional structures, such as the Greater Mekong Sub-Region, that, while focused on practical cooperation, have assumed modest, quasi-political status.

But all of this represents the vision of previous generations, now in urgent need of renewal.

The Asia development project has been the world's most successful and, for OECD nations, hugely positive economically, politically and strategically. For 50 years the game has broken our way across Asia, favouring freer markets and wider political participation in a self-fueling cycle. Riding that wave has been relatively easy, compared with what may be coming next.

The Western international growth and development model is under serious threat. Its power to induce growth is not doubted, but the re-emergence of cyclical financial crises is understandably feared. Rising concentrations of income, wealth and market power are returning distribution and political economy as centre-stage issues, at a time when institutions are ill-prepared to address them. Angry, confused responses to globalisation in the US, UK and Europe are creating the appearance of Western insularity and impotence.

China has stepped into this space as a cashed-up, confident leader with a global vision. It offers to keep the world open, but on its terms. Through the Belt and Road Initiative, it will connect less developed parts of the globe directly to Beijing.

China will offer assistance, supposedly without meddling. And, at least until its economy experiences a sizable and prolonged crisis (as it well might), it will project an image of strong, decisive and effective government. We should be under no illusions as to the growing attractiveness of 'the China offer' (versus its liberal, democratic alternative) at this moment in history.

For all of these reasons the ADB, as an integral institution of the existing international order, must be bold. Muddling through and growing the balance sheet just isn't enough.

The ADB was once an indispensable institution and should seek to be so again.  When Asia was starved of capital and largely poor, the ADB was a critical development financing institution and source of advice. Now, much of what it offers (money, knowledge and technical skills) is available elsewhere.

One path, possibly the easiest to take, might lead the ADB to broaden what it offers by going beyond its traditional focus on infrastructure and finance. The risk here is that its expertise in new areas may be small, while its costs escalate and its management over-reaches. Peter McCawley's sage advice to the ADB in Yokohama was to stay focused.

As the ADB itself obsessively reports, Asia's infrastructure spending gap is approaching US$1 trillion per annum – there is no shortage of work, especially in urban infrastructure, water and sanitation, and in responding to climate change. The ADB talks about the lack of bankable projects and leveraging private and public money to address the gap, but it was talking this game a decade ago. If it can really move on this agenda, it will be delivering much greater value, but potentially at the cost of expanding its own loan book, something it has traditionally been reluctant to do.

This is the acid test. Can the ADB shift the key measures of its success from the volume of its own lending to higher level economic and strategic impacts?

To do so, the ADB must make greater use of its status and convening power to address more explicitly the biggest risks to Asian development. These include the need for deep-seated reforms to break up monopolies, redirect subsidies, regulate powerful players and generate sufficient revenue to deliver additional public goods and services.

The ADB must stay engaged with middle-income countries, not because they represent a big market for loans, but rather because their future growth and development is far from assured. The ADB needs to relook at how it contributes to the development of robust, independent, expert institutions and the political economy of policy change. The ADB is not well geared for this new agenda.

The ADB also needs to take a broader view of regional public goods and become a catalyst for their provision. Asia will need more than roads and trade agreements in the next century if it is to stay peaceful and prosperous. In particular, it will need to evolve new forms of regional governance for migration, health security, social insurance, environmental management, disaster relief, and so on. This may allow new, stabilising, cooperative institutions to grow out of the practical cooperation the ADB can foster. It does not need to be a provider of all, but rather to help countries articulate what is needed and to illuminate financing issues and options.

The ADB isn't what it once was, but nor should it be. It needs to reinvent itself for a much more complex region. It has embarked on a lengthy process to produce 'Strategy 2030' by the end of 2018. The risk is that the 30 sets of consultations it has already undertaken will deliver confusion, or a low-yield compromise. The ADB cannot satisfy everyone, and it should not try.

To date, many senior staff and international partners have been underwhelmed by the directions proposed, which amount to more of the same, and more of the rest. There is a hunger for higher ambition, combined with both strategic opportunity and threat. Next year may determine whether the Asian Development Bank is a spent force or a force to be reckoned with. Tokyo, Washington and Canberra have key interests at stake.

Young feminist leadership is the future of peacebuilding

Not all regional nations are overloaded by debt. There is some scope to lend sustainably.