Don’t assume the last decade of political chaos is over as the major parties remain drained of authority and purpose. 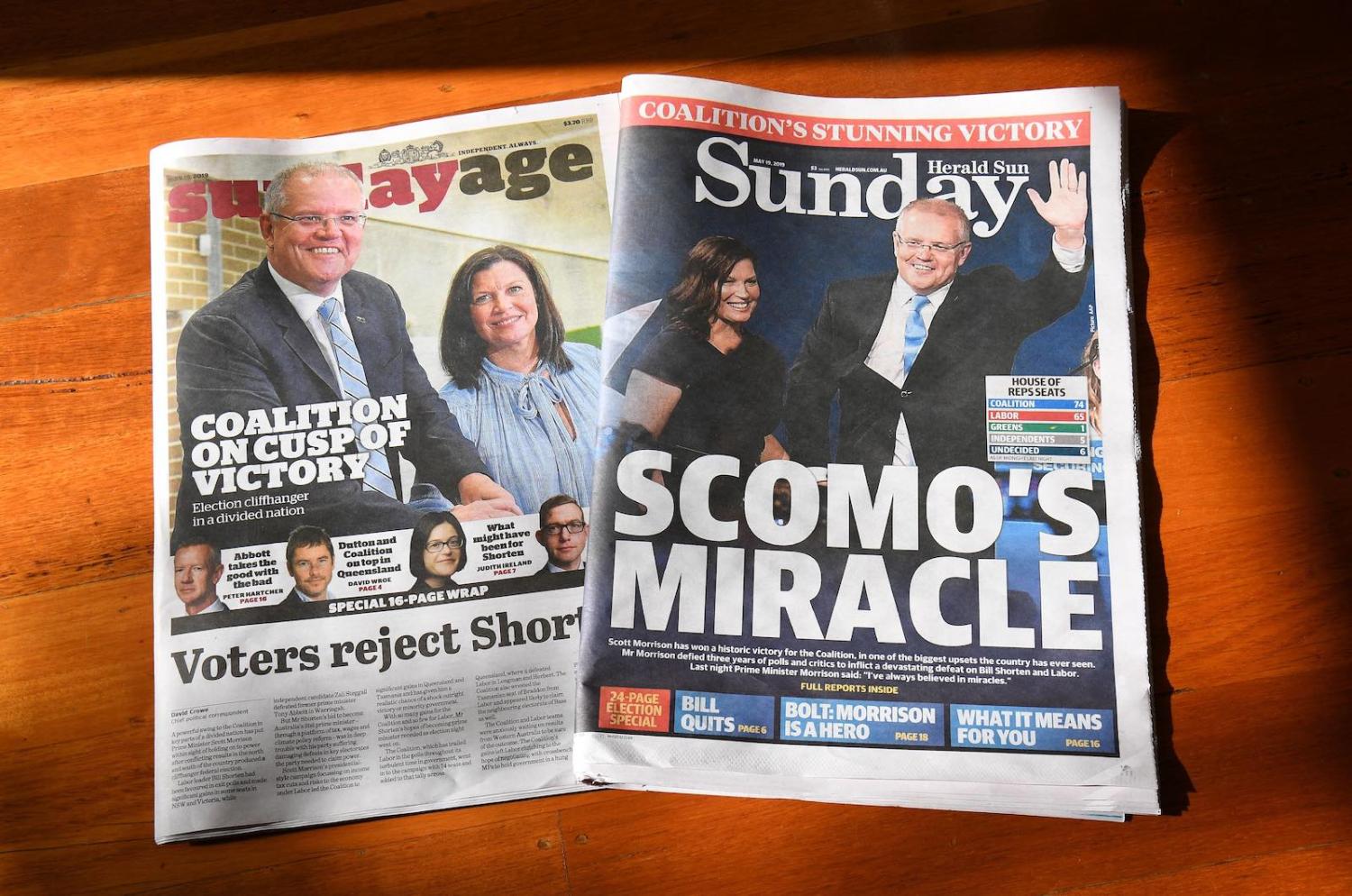 Pundits and headline writers have painted this as a miracle for the Coalition but that framing is based on the fact expectations for Labor went unmet (Photo: William West via Getty)
Published 15 Jun 2022     Follow @SamRoggeveen

Not everyone who was hoping for a Labor victory took the loss well. But if, as the sore losers claimed, the unexpected return of the centre-right Morrison Government shows that Australians are racist, greedy, mean-spirited and stupid, then it must have come over the electorate rather quickly.

After all, this is roughly the same group of voters that elected Labor leader Kevin Rudd and his party to office in 2007, and his successor Julia Gillard to minority government in 2010. It overwhelmingly passed a same-sex marriage plebiscite in 2017. It is a nation which, according to Lowy Institute polling, is generally well disposed to immigration. And the respected Australian Election Study shows that across policy areas such as multiculturalism, abortion rights, gender equality, indigenous issues, recreational drugs and immigration, Australian attitudes have become steadily more liberal since the 1980s.

The other popular explanation for the result was that the Labor opposition had taken too big a risk with its bold policy agenda, leaving it vulnerable to the government’s “scare campaign”. Possible, but there are at least three other ways to interpret the evidence. First, maybe the policy agenda was right but the salesman was wrong. Or second, it’s not that the salesmanship was poor or the policies too bold, they just happened to be the wrong policies.

Then there’s a third explanation, one which will bring even less comfort to Labor: the policy agenda was irrelevant. The result simply reflected the fact that the Labor party has become steadily less popular with voters since the early 1980s. Granted, Labor’s primary vote did spike in the 1993 and 2007 elections, and no doubt its supporters were hoping for something similar this time around. But the long-term trend is clear and was reinforced at this election, with a primary vote to Labor of 33.9%, almost 1% down on the dismal 2016 result. The Liberal-Nationals Coalition primary vote declined too, again consistent with long-term trends (although the decline is more gradual and halting for the Coalition than for Labor).

The result, in terms of lower-house seats, was a narrow victory for the Coalition, meaning it will either preside over a minority government or a paper-thin majority. The pundits and headline writers have painted this as a miracle come-from-behind victory for the Coalition which gives Prime Minister Scott Morrison overwhelming authority, but that framing is based entirely on the fact that expectations of a Labor victory were unmet, expectations which were, it seems, based on dodgy polling.

So rather than this being for Morrison a “Keating 1993” moment – when then prime minister Paul Keating snared what appeared an unlikely majority ­– it is probably more accurate to think in terms of Gillard’s minority government win in 2010 or Turnbull’s one-seat majority in 2016. In turn, that means we’re not looking at a revived and rejuvenated Liberal government but at a party which has limped to the slimmest of victories against a Labor opposition even more exhausted of support and sympathy than anyone imagined.

The new Morrison government has a wafer-thin mandate and no policy platform to speak of. The best-case scenario is that, like the minority Gillard Government, Morrison gets a lot done. The worst case is something like Turnbull’s 2016 term. Given that several of the new centrist cross-bench members have promised strong action on climate change, we may see Morrison caught between his own party’s right wing and the independents keeping the government in office.

Don’t assume, then, that the chaos of the last decade is over. It may actually get worse because the historical forces driving that chaos have not abated. Former Liberal leader Tony Abbott inadvertently put his finger on the reason why. In his graceless statement on the death of the Labor Party’s longest-serving prime minister, Bob Hawke, Abbott claimed Hawke’s “key achievements ­– financial deregulation, tariffs cuts, and the beginnings of privatisation – went against the Labor grain … he had a Labor heart, but a Liberal head”. That Abbott saw the grief for this beloved figure as an opportunity to make a partisan point is symptomatic of the ideological bubble in which our politicians operate. So convinced are they of the urgency of scoring a point against their opponents that ordinary human decencies begin to give way.

Globalisation, the economic liberalisation of the 1980s, the decline of blue-collar jobs in advanced economies, the feminisation of the workforce, and the death of communism have all swept through Australia, leaving both our major parties behind.

And yet, didn’t Abbott have a point? Hawke liberalised the economy and pulled the teeth of the union movement to encourage wage restraint. In the process, the entire basis of Australian party politics was undermined. That arrangement had been simple and clear: organised labour on one side, capital on the other.

What Abbott perhaps fails to appreciate is that Hawke’s reforms were a disaster for the Liberal Party because it deprived the Liberals of an enemy. With the union movement blunted, what was the Liberal Party really for? That question became even harder to answer when the Berlin Wall came down in 1989. The Liberal Party had already been deprived of its domestic adversary, and now its other raison d’etre, fighting the Cold War, had also ended.

Here at the Lowy Institute, we are dedicated to studying Australia’s place in the world, but sometimes it helps to reverse the perspective. Global trends have had a transformative effect on our domestic politics. Globalisation, the economic liberalisation of the 1980, the decline of blue-collar jobs in advanced economies, the feminisation of the workforce, and the death of communism have all swept through Australia, leaving both our major parties behind. This election once again demonstrates how drained of authority and purpose they both are. Trouble is, we still have no idea what, if anything, can replace them.

US-China at sea incidents are likely the new normal

There has been yet another spate of US-China incidents involving US intelligence, surveillance and reconnaissance probes.
Simon Cotton 24 Nov 2021 13:30

The lessons of history are many and few are simple. Empty threats can be just as damaging to a country’s reputation.
Maaike Verbruggen 29 Apr 2020 10:00