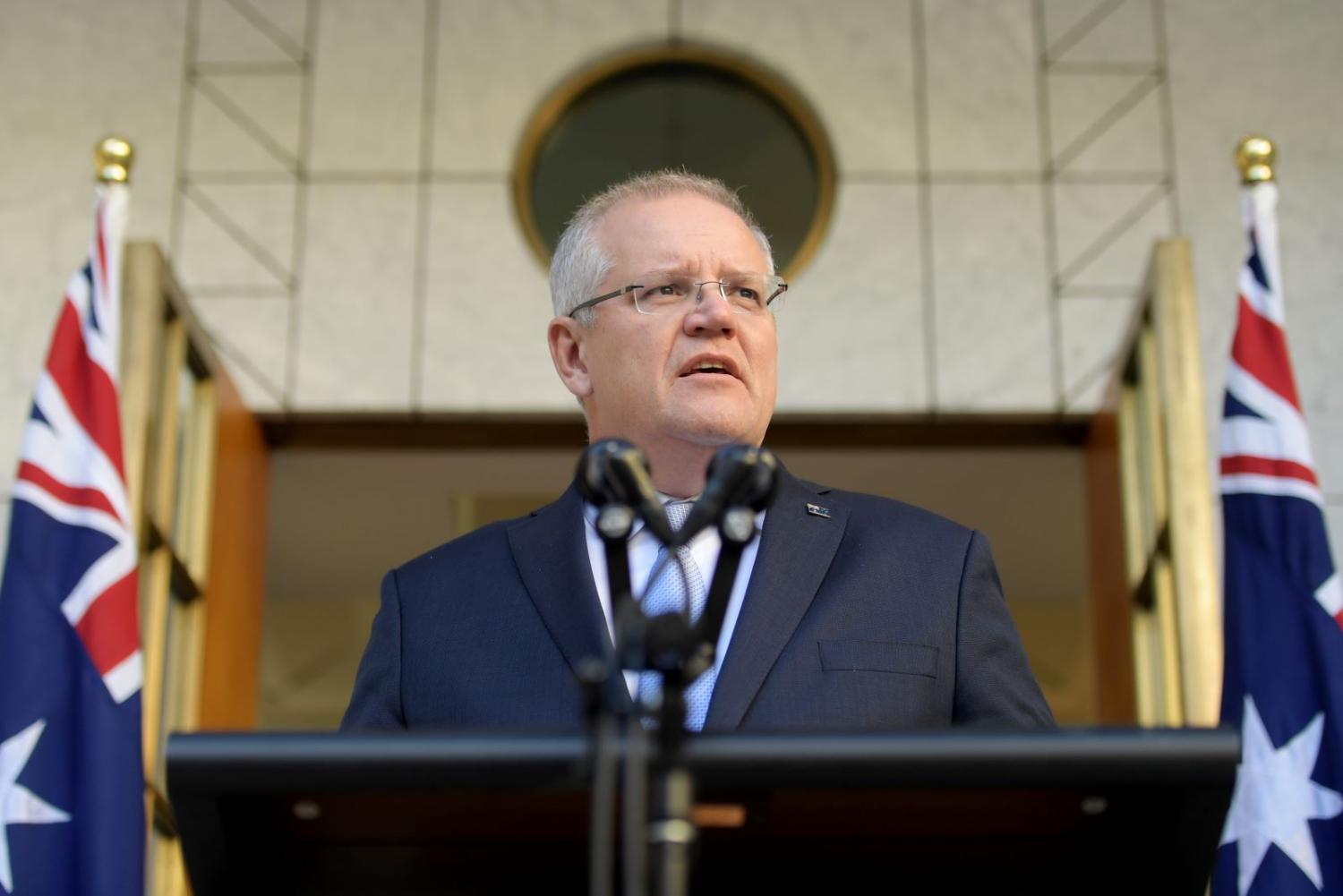 Australian Prime Minster Scott Morrison delivered his first major foreign policy speech since his surprise win in the May election, to an invited audience in Sydney on Wednesday.

Two days ahead of his attendance with other world leaders at the G20 in Osaka Japan, in a historical moment defined by uncertainty and strained relations between the US and China, Morrison asserted Australia’s influence on the world stage as an open economy, an eager trading nation and a middle power.

“Stand still with us for five minutes and we’ll do a trade deal with you,” he said in off-the-cuff comments following the speech.

And he credited Australia’s 28 years of uninterrupted economic growth to three things: “investment, immigration and trade”.

With much of the world watching anxiously the trade war and tech tensions between the US and China, the anticipated meeting of President Donald Trump and President Xi Jinping on the last day of the G20 will loom large over the global leaders’ gathering.

Morrison called on the US and China to recognize that tensions in “the world’s most important bilateral relationship” have economic consequences for everyone, and that “the collateral damage is spreading”; in a speech that focused in on economic issues and skirted tougher security and ideological differences at the heart of US-China tensions.

But he rejected what he categorized as fatalism about these tensions necessarily escalating to open conflict; insisting that “an ever-worsening trajectory in this relationship is not inevitable.”

Speaking at Bloomberg to the Asialink group, Morrison flagged efforts to work closer with Japan, India, Indonesia and Vietnam; and lent strong support to the ASEAN grouping.

Morrison repeatedly rejected framing US-China relations as a matter of picking sides, but appeared to single out China for more criticism than the US, on my reading.

“Like any nation the US is not perfect,” he said, but it has “…demonstrated an understanding that the responsibilities of great power are exercised in their restraint, freely subjecting itself to higher order rules, their accommodation of other interests and their benevolence.

“Such power supports the independence and sovereignty of other nation states and affords protection beyond its own interests, in the knowledge that this is necessary to maintain the peace and stability that ultimately underpins their own prosperity.”

He stressed Australia’s “resolute and mutually beneficial alliance partnership” with the US; and  emphasized the role of the US in enabling China’s rise, by underpinning post World War II peace and supporting China’s accession to the WTO in 2001.

However, he said, “it is now evident that the US believes that the rules-based trading system – in its current form – is not capable of dealing with China’s economic structure and policy practices.”

“It is therefore important that US-China trade tensions are resolved in the broader context of their special power responsibilities, in a way that is WTO-consistent and does not undermine the interest of other parties, including Australia.”

And in words unlikely to be warmly received in Beijing, Morrison said US concerns about China’s policy practices were legitimate.

On Australia-China relations, enjoying a tentative thaw after a stint in China’s diplomatic freezer for much of 2018, Morrison sought to present a pragmatic, transparent approach, where Australia would work in its national interest and China in its.

“While we will be clear-eyed that our political differences will affect aspects of our engagement, we are determined that our relationship not be dominated by areas of disagreement,” he said.

Following controversial decisions to block a handful of large land and infrastructure sales to Chinese companies on national security grounds made during the time Morrison was treasurer, he made the reasonable observation that Australia’s foreign investment regime is the most liberal in the region, pointedly noting that “it is not possible for Australians to invest in China in the way Chinese investments are made here.”

But he committed to strengthening ties with China; citing two-way trade, people to people ties and cooperation in health, education, taxation and countering drug trafficking.

Japan, as G20 host and an emerging leader of the new era in middle power diplomacy, was singled out for special warmth, receiving second mention in the speech after the US, and rather pointedly, before China. Calling Shinzo Abe a “great friend of Australia,” Morrison said, “Prime Minister Abe has a vision to strengthen the international order as his leadership of the G20 this week, at the dawn of a new Reiwa era, will demonstrate.”

The world will be watching.

Previous Article
Aid links: labouring along the Belt and Road, carbon cash, more
Next Article
The Matildas and Socceroos vs. Marta and Messi

Protecting ocean resources can sometimes require extreme measures from which there is no way back.
Jon Fraenkel, Anthony Tutugoro 15 Jul 2020 06:00

The Covid-19 crisis has been a major controversy, but almost every issue is divided on pro- and anti-independence lines.
Liam Finnigan, Stephen Noakes 6 Mar 2019 06:00

In New Zealand, much ado about China

There is talk of a downturn in NZ-China relations. But in reality, the two have never had a perfect relationship.