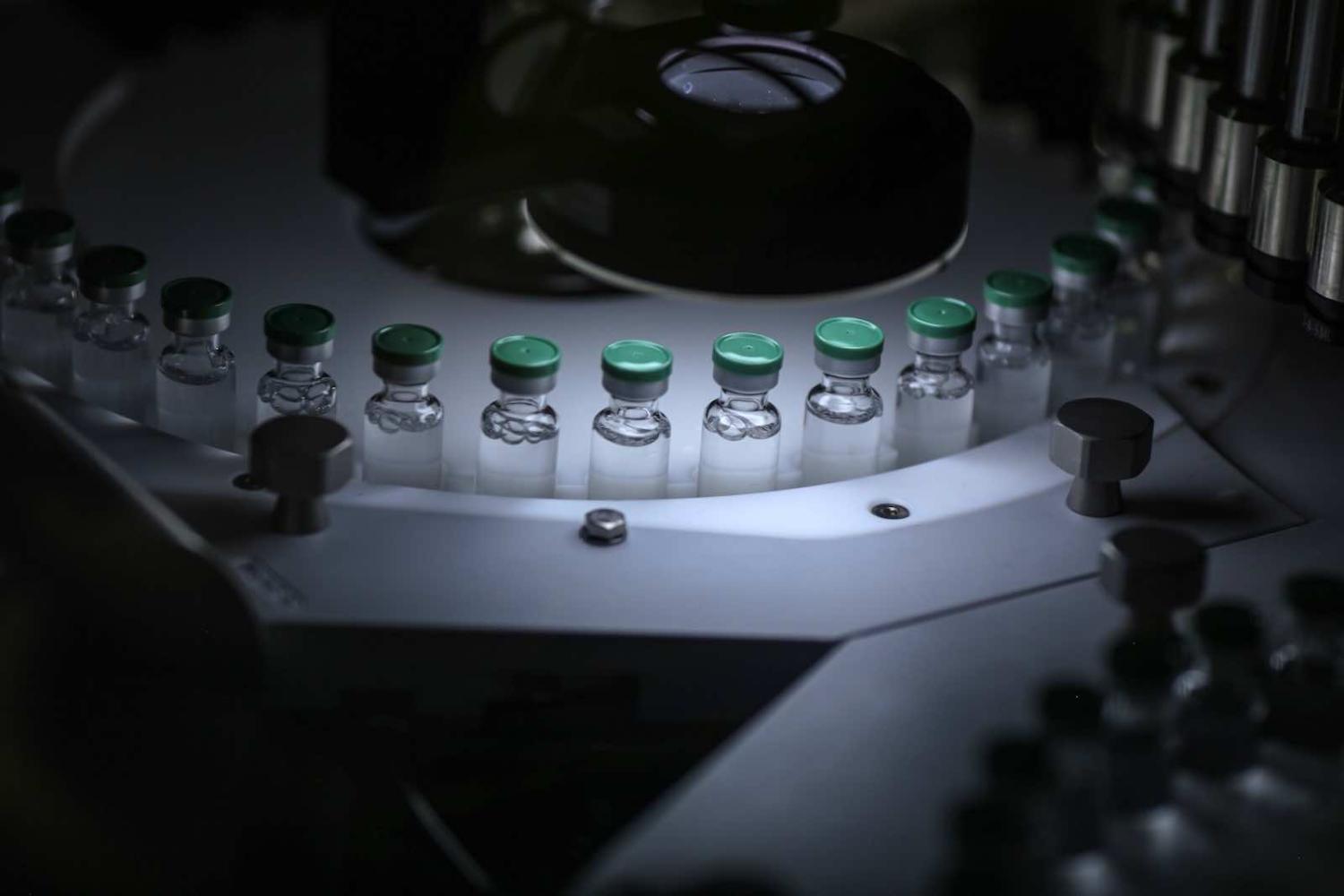 Vials of Covishield, the local name for the Covid-19 vaccine developed by AstraZeneca and the University of Oxford, on the production line at the Serum Institute of India, Pune, Maharashtra (Dhiraj Singh/Bloomberg via Getty Images)
Published 7 Sep 2021     Follow @philippabarr_

High global demand and a shortfall in supply for some Covid-19 vaccines have contributed to booming trade in counterfeits. Interpol has called out the risk of fake Covid-19 medicines and products including vaccines, tests and protective clothing. In August, the World Health Organisation issued an alert for false versions of India’s Covishield vaccines in Uganda, India and Myanmar, while a few months earlier pharmaceutical giant Pfizer confirmed anti-wrinkle treatment and other substances had been falsely labelled as vaccines and sold for up to US$2,500 in Poland and Mexico. Earlier this year a man was arrested in China for leading a US$2.8 million racket which sold 58,000 Covid-19 vaccines faked with saline solution and mineral water.

This worrying phenomenon is contributing to the already enormous global trade in fake medicines, said to be the most profitable illegal market in the world and worth between US$100­–$431 billion yearly. WHO has estimated that at least one-in-ten medical products in low and middle-income countries in Europe, Africa, the Americas and Asia are low quality or falsified, killing countless numbers of people every year.

The danger goes beyond medicines. There have been reports of fake Covid-19 vaccination certificates being sold online in Australia for up to $120, with some sites claiming that they could arrange for doctors to enter false vaccination records into the Australian Immunization Registry.

The risk of counterfeit vaccines is far higher in poorer countries where there is low supply of vaccines and high rates of Covid-19.

The risk of fake vaccines and vaccination certificates is so grave that the Commonwealth Fraud Prevention Centre, which sits inside the Attorney-General’s department, has been working with the federal Department of Health over the past year to track vaccine fraud threats around the world. Australia’s Joint Committee on Law Enforcement conducted an inquiry into vaccine fraud risks specific to Covid-19 vaccines, such as online scams. The committee heard that changing health advice around the recommended age limit for the AstraZeneca vaccine could fuel demand for alternative vaccines, while Australia’s particularly high concentration of “darknet drug vendors per capita”, according to the Cyber Security Centre, could easily create a black market in fake or illegally procured vaccines.

The risk of counterfeit vaccines is far higher in poorer countries, including those in Africa, where there is low supply of vaccines and high rates of Covid-19. Africa is already the world’s largest market for fake medicines, and in May and June, when Covid-19 case rates were soaring to up to 1700 per day, 800 people in Uganda paid between $34 to $163 for fake Covid-19 shots. According to GAVI, the Vaccine Alliance, one of the partners to efforts to provide equitable access to vaccines known as COVAX:

The highest risks will likely be in those countries where governments have not secured enough vaccines to meet demand, or where stock mismanagement has created shortages and where people turn to the private sector to protect themselves.

For several years UNICEF has been investigating the potential of blockchain for documenting the conditions of vaccines as they move through the supply chain and for proving their authenticity. Some consultants in Australia have begun to advocate for a vaccine registry using blockchain technology, which is essentially a decentralised digital ledger, to authenticate vaccines and vaccine certificates. This measure could also help maintain the quality of vaccines as they are distributed around the world. Prior to the outbreak of the Covid-19 pandemic, WHO reported that 50–60 per cent of vaccines that require refrigeration lose their efficiency during storage or transport. Since some Covid-19 mRNA vaccines, such as Pfizer, need to be stored at around minus 70 degrees Celsius, they could be affected by a breach in conditions during production, storage or distribution.

Because it is decentralised and encrypted, blockchain is relatively transparent and tamper proof.

Scanning serial numbers on packaging and storing them in a blockchain produces a digital ledger of all transactions as goods move through a supply chain. This can be used as proof that a vaccine has originated from an authentic manufacturer and that suitable conditions have been maintained throughout its journey to a pharmacy, clinic or vaccination centre. Because it is decentralised and encrypted, blockchain is relatively transparent and tamper proof and is already being used by some shipping companies to improve quality control and share data between organisations responsible for moving resources through supply chains.

According to the UNICEF Vaccine Market Dashboard, COVAX has delivered 406 million doses to 139 countries. Of these 82 countries have received donations of more than 134 million doses. This effort could be undermined if a market in fake vaccines competes with COVAX supplies, effectively leaving vast portions of the world’s population unvaccinated.

Alert to the danger, UNICEF recently closed a tender for the development of a blockchain-based solution to authenticate vaccines. The Global Trust Repository will allow Covid-19 vaccines to be scanned and verified so their serial number can be compared with a blockchain-secured list of product codes generated by the manufacturers. While this sounds promising, earlier the year medical journal The Lancet published results of a trial using blockchain to store immunisation records in India, concluding that while results of a pilot were positive, it would not necessarily prevent errors being made at the level of data collection and data entry.

In any case better documentation of vaccines as they move around the world in such high volumes will likely have a positive impact on quality and reduce the opportunities for counterfeiters, providing a benefit to every Covid-19 vaccine recipient.

Covid-19 exposes the need for a European constitution

The pandemic has ruptured the fragile solidarity at the heart of the European project. There is a chance to fix it.
Alexandre Dayant 4 Mar 2020 11:30

The Philippine president has pinned hopes on a miracle solution to the Covid crisis while gutting effective responses.