Book review: The memory of a massacre in Thailand

Survivors and perpetrators alike have preferred silence as a way of coping with a traumatic past.

Book review: Thongchai Winichakul, Moments of Silence: The Unforgetting of the October 6, 1976, Massacre in Bangkok (University of Hawaii Press, 2020)

In the early hours of 6 October 1976, Thai police and right-wing thugs laid siege to Thammasat University in Bangkok, where thousands of students had gathered to protest the return to Thailand of a dictator forced from power three years earlier. The brutality that followed is hard to imagine. Urged on by military broadcasts that labelled the student movement part of a communist plot to overthrow the monarchy, the attackers beat, shot, tortured and lynched students in a frenzy of violence that – officially – left 46 dead. A coup was launched later the same day, and thousands of students and activists were arrested.

Among them was Thongchai Winichakul, then a 19-year-old student leader, who took shelter behind a stage as the violence unfolded that morning, desperately pleading into a microphone over and over for the shooting to stop. As Thongchai documents in his powerful and personal book Moments of Silence, more than 40 years later, much about the massacre remains unknown, from victims who are still unidentified to deeper and more dangerous questions about the exact role of the monarchy and the military.

There is a photograph taken that day that is perhaps most synonymous with the massacre. In it, a man is poised to thrash a folding chair over a lifeless body hanging from a tree, surrounded by a crowd of onlookers. Incredibly, despite the photograph winning a Pulitzer Prize, both victim and attacker remain unidentified to this day. For Thongchai, the silence surrounding the identity of these two men is indicative of a broader silence about the massacre that has largely prevailed in Thailand.

But silence, Thongchai argues, is not the same as forgetting. It does not suggest an absence of meaning or a passive state of amnesia. Rather, it is a “symptom of the inability to remember or forget,” a condition Thongchai terms the “unforgetting”.

The reasons for this unforgetting (a term Thongchai uses interchangeably with “silence”) and its implications are the focus of the book, which draws on interviews with survivors and perpetrators, memoirs, testimonies, photographs, autopsy reports and other evidence, as part of many years of research.

Perhaps the most obvious driver of silence and ongoing ambiguity about the massacre is sensitivity about the involvement of the Thai monarchy, which remains unclear. Probing these events in Thailand, where criticism of the monarchy is criminalised, could hold serious repercussions, and the truth is therefore “both suppressed and self-censored”. But suppression of the truth is only one factor. A voluntary silence adopted by both survivors and perpetrators is also identified, as a way of coping with the traumatic past. 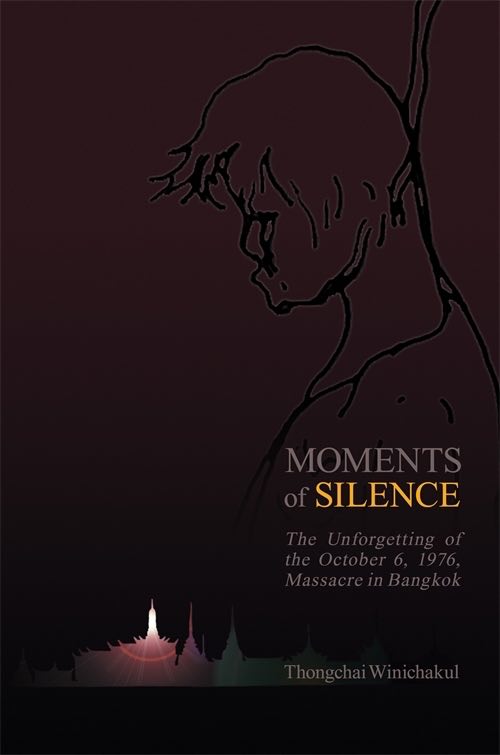 Thongchai describes commemorative events held in 1996 to mark 20 years since the massacre as important in shifting power toward the victims’ memories of the massacre and opening up some limited space for discourse. The events featured exhibitions, speeches, music and art about the massacre on the same campus grounds where students had been slain two decades earlier. However, self-censorship was also evident, with organisers electing to remove a controversial photograph at the eleventh hour, fearful of sparking another lèse majesté controversy.

The image was of the front page of a right-wing newspaper run on the day prior to the massacre, which explosively accused students of staging a mock hanging of the crown prince (now Thailand’s king). In fact, the mock hanging was part of a skit staged by students to protest the killing of two labour activists found hanged in a public space days earlier. The allegations poured fuel on the fire at a time of royalist and anti-communist hysteria.

A monument to 6 October was unveiled at Thammasat University in 2000. A low, six-metre long granite slab, the monument is inscribed with the date of the massacre and the sculpted faces of several students killed that day. For Thongchai, the monument is symbolic of a memory that remains on the margins. Even its location, within the contained space of the university grounds, suggests a memory existing on the fringe of public consciousness. The main feature of the monument, the date, is the “most neutral name” for the massacre – an uncontested fact that to Thongchai suggests a kind of memorialisation that only “speaks as much as is allowed”.

Despite this, in the present context where memorials to another event in Thai history, the 1932 revolution, are steadily being removed, the monument to 6 October remains a significant marker of past state violence. This book, too, is a powerful study of how a violent past can haunt a society when left unaddressed.