Trade negotiators must think that theirs is an unhappy lot. But they keep trying – as they should. 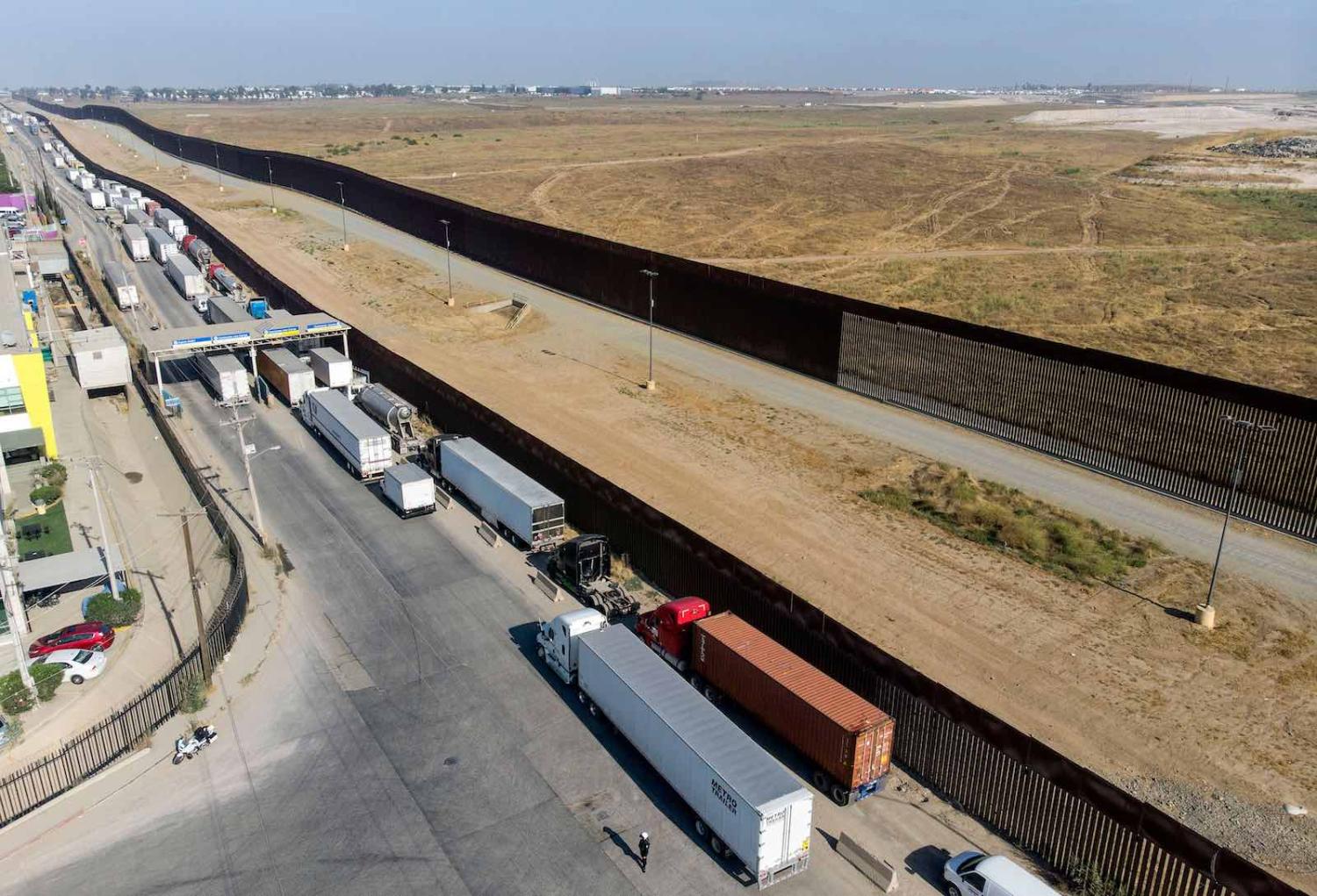 Trucks queue to cross the border into the US at the Otay commercial crossing point in Tijuana, Mexico, 7 July 2020 (Guillermo Arias/AFP via Getty Images)
Published 24 Jul 2020

Did anyone notice that the United States–Mexico–Canada Agreement (USMCA), the revised NAFTA, entered into force on 1 July? If not, do not be too concerned, as the Covid-19 crisis has probably affected that as well.

Still, this deal is (without getting too much into the weeds of whether it is more or less liberal than NAFTA) one of the few examples we have of negotiated trade liberalisation in 2020.

We are now far enough into the Covid crisis to realise that not only has the world changed, but also some of the concepts and structures which have underpinned global stability since the end of the Second World War are seriously weakened.

Look at global trade. In the period after 1945, led by the US, the international community made a commitment to expand global trade and to try to stop protectionism – which has wracked the 1930s – from becoming predominant again. Nearly 50 years later, the conclusion of the Uruguay Round brought us to a point where it seemed as if global trade was a given in the way the world operated.

In this obvious deadlock at the global level, regional and bilateral free trade agreements, even if a lesser substitute, are all we have.

Now, 25 years later, things look very different. This has not been caused by Covid-19. Much of the fraying of the trade rules has been happening for other reasons. But the coronavirus situation has highlighted what has happened and also made the way out of this mess much harder to see.

Covid-19 has contributed to a climate in international relations where the first reaction is to think national. What’s the phrase? All issues are global, but all politics is local.

We have seen nationalism interfere with global trade in the very things needed internationally to combat the virus. We have seen the partial dismantling of global supply chains. We have seen the move towards domestic protectionism, described as “ensuring supply”, across a range of industries.

What we have not seen is much leadership in the international community about how to get trade rules back up and running. The World Trade Organization might be flawed in some ways, but it is the only organisation with an international mandate. Work on reforms is underway, but without serious engagement from the US and China, things will limp along. The WTO currently is searching for a new director general. In these times of crisis, one would have hoped for a speedy identification of a suitable candidate who could bring some leadership to the issues. But it looks unlikely.

In this obvious deadlock at the global level, regional and bilateral free trade agreements, even if a lesser substitute, are all we have. That’s why the entry into force of the USMCA should be seen positively.

In Australia and New Zealand, we have to be thankful that the Comprehensive and Progressive Agreement for Trans-Pacific Partnership is up and running. Trying to negotiate that now would be well nigh impossible. Had the US had not pulled out of it as the TPP, it would undoubtedly be stronger than it is. But it functions and delivers results. This explains interest from the United Kingdom in doing free trade agreements with Japan, Australia and New Zealand. If the UK wants to join the CPTTP, as it says it does, it cannot get there without getting bilaterals with three of CPTTP’s members.

We do know that in the Covid-affected world, the Asia-Pacific will be a significant player in the regrowth of global trade flows. In the WTO’s most recent projection, global trade in the 2019–20 year (first quarter) will drop about 18.5%. Beyond first quarter 2021, the recovery should be better in the Asia-Pacific than in the rest of the world. IMF modelling suggests that the development of further trade liberalisation and regional economic integration could lead over time to a 10% growth in Asian GDP. China looks on present indications to recover from its lowest annual growth rate in over 40 years.

China is not, of course, a member of the CTTP. It is leading the negotiation of its own version of a regional economic integration model, the Regional Comprehensive Economic Partnership.  Participating countries are due to ratify this agreement at the end of this year, but the withdrawal of India from the process late last year has reduced the scope of RCEP significantly. In the current tense climate between Delhi and Beijing, Indian reintegration looks very unlikely.

Still, if ratification and entry into force go ahead, the region will have two similar trade agreements, neither of which the US plays a role in. This is, quite frankly, a tragedy – not only strategically, but also because the US economy is a major participant in Asia-Pacific economic development. China gains from this absence.

In the meantime, the European Union and the UK, which would be interested in developing their trade relations with the region, are struggling with the damage caused by Covid-19 and post-Brexit relations. So not much to expect there.

Trade negotiators must think that theirs is an unhappy lot. But they keep trying. The latest effort, which may get somewhere – including with the US –  is the Digital Economic Partnership Agreement launched by Singapore, Chile and New Zealand. Trying to establish a framework in the digital era, the agreement touches on such things as artificial intelligence, data sharing and protection, and digital innovation. It deserves success.

A battle for authoritarian control of the internet is underway at the most important UN body you’ve never heard of.
Kaz Ross 29 Jan 2021 11:30

The Covid pandemic and anti-CCP fervour have brought together some unlikely allies.
Michael Heazle 8 Jul 2019 12:00

More plastic waste is choking the world’s oceans yet despite global declarations and commitments, nothing much is done.