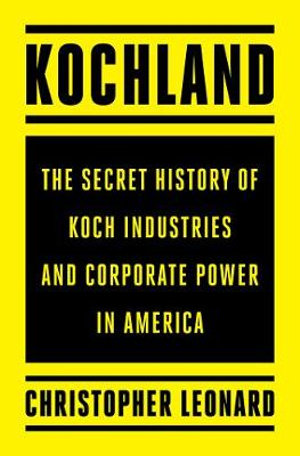 Kochland tells the astonishing story of Charles and David Koch, known simply as the Koch brothers. Charles, who might be described as a modern-day robber baron, gets much of the focus. His outstanding entrepreneurial skills generated wealth beyond the dreams of avarice. But what sets him apart is not his commercial skills, but the unelected political power he wields through his political network and his “advocacy philanthropy” – strategic donations designed to further his doctrinal libertarian philosophy.

Fred Koch, a founding member of the anti-communist John Birch Society, bequeathed to his four sons a substantial industrial enterprise, mainly in oil refining and oil pipelines. Charles, the most entrepreneurial of the brothers, expanded it into a wide-ranging conglomerate.

Out of this early business experience, he formed a powerful doctrine in which the unregulated free market was the core belief. His growing fortune, however, depended more on his ability to identify and exploit the super-profits to be made from market imperfections.

“It is the spouting whale that gets harpooned” was a favourite maxim. Nevertheless, they were active in politics from the start, backing a self-serving libertarian agenda of low taxes and deregulation.

His detailed knowledge of oil distribution gave him special insights into supply-and-demand conditions (what in financial markets would be called “insider information” and hence illegal). As commodity markets developed in the 1980s, Charles took these insights beyond oil and gas into other newly deregulated commodity markets.

Deregulation and privatisation took off in America in the 1970s and gained extra momentum during Ronald Reagan’s presidency in the 1980s. This shift was enthusiastically endorsed not only by libertarian politicians, but also by mainstream economists searching for the greater productivity which the incentives of the private market would provide.

But these newly deregulated markets had complexities not envisaged in economic textbooks – complexities that presented opportunities for wily entrepreneurs like Charles Koch.

California’s privatisation of electricity provides an example. Charles bought electricity-generating capacity and strategically used this supply together with his insider market knowledge to exploit flaws in the newly privatised market structure. The initial privatisation, with its huge price surges, was a disaster for consumers and the politicians who had promoted it, but it was a stunning financial triumph for Koch.

The Koch brothers’ wealth (estimated at upwards of $100 billion when David died in 2019) exceeded even that of technology innovators such as Bill Gates and Steve Jobs. But what has distinguished them from other successful entrepreneurs is their far-reaching political activism.

For many years, they retained a low public profile. This was intentional: “It is the spouting whale that gets harpooned” was a favourite maxim. Nevertheless, they were active in politics from the start, backing a self-serving libertarian agenda of low taxes and deregulation.

The narrow focus of this agenda gained little popular traction. Tactics changed, with political contributions directed towards “advocacy philanthropy” to influence the political structure and wider public debate. Political donations were aimed at replacing centrist Republicans in Congress with hard-right candidates. They funded libertarian think-tanks and encouraged university scholars to promote their agenda in public debate. Their backing was instrumental for the success of the Tea Party. They organised and funded Americans for Prosperity, a political network which claims over 3.2 million members, linked together by the Koch political machine, which can mobilise busloads of campaigners to descend on Washington or destabilise a political meeting. Changes in political contribution rules in 2010 effectively removed limits on tax-deductable donations.

The libertarian agenda still found an echo in advocacy for low taxes and deregulation. Also apparent was the convenient overlap with the Kochs’ commercial interests: their fossil-fuel interests made them pioneers in promoting climate change scepticism. Their political machine scuppered Bill Clinton’s proposed energy tax in 1993 and stymied Barack Obama’s 2009 cap-and-trade proposal to limit carbon emissions.

For many readers, the political dimension will be more interesting than the details of Koch Industries’ commercial operations, although this political aspect has already been covered in Jane Mayer’s Dark Money: The Hidden History of the Billionaires Behind the Rise of the Radical Right.

There are parallels with the 19th-century robber barons, including Andrew Carnegie’s libertarian rationalisation for single-minded pursuit of profit. But the success of the Kochs’ political activism sets them apart from the robber barons, who ultimately lacked political influence – they faced unrelenting public criticism from the press and labour, and their monopolisation was curtailed, beginning as early as the Sherman Act in 1890.

Economists will be familiar with the unresolved inconsistency of doctrinaire free-marketeers: in textbook free-markets, competition drives profits down to “normal” levels where there are none of the “economic rents” (super-profits resulting from market imperfections) that are central to the creation of great fortunes.

One reviewer has described the book as “oddly ambivalent” in judging the Kochs’ outsize political impact. Perhaps the only other entrepreneur who wields similar non-elected power is Rupert Murdoch, who has exercised his influence more openly. The Kochs have not always succeeded in imposing their libertarian views in the Trump era. Trump’s demolition of regulation, climate-change policies, and corporate tax cuts may fit the libertarian agenda, but the resulting budget deficit would not. Nor would Trump’s tariffs and interventionist industrial policies.

Trump and the Kochs are very different in style and substance, but both have fostered the current split in the Republican party between Trump’s populism and the traditional business agenda. Kochland might have given more prominence to the poisonous legacy of this polarisation.