People-to-people connections that stretch across tens of thousands of years don’t stop when lines are drawn on a map. 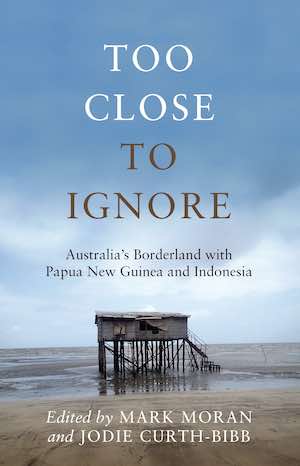 Borders have been in the news in Australia, with the novel if frustrating experience of interstate pandemic restrictions leaving residents unable to cross previously free borders to access jobs, family and healthcare.

But for those who live along the closest thing Australia has to a land border with another country – the Torres Strait Islands and adjacent Papua New Guinea ­– those complications are an everyday reality that has stretched back decades.

Fewer than five kilometres, or just a 15-minute ride in a dinghy, separate Papua New Guinea and Australia at their closest point, between Saibai Island and the PNG mainland.

Despite the geographic proximity, the lives of those on either side of that border are becoming increasingly separate, disparate and – on the PNG side – desperate.

In a new book Too Close to Ignore, editors Mark Moran and Jodie Curth-Bibb bring together a collection of focused studies of the border region and Australia’s approach to managing the myriad health, resources and security challenges that straddle it. And, while it’s a thoroughly researched and referenced academic analysis, it’s also an accessible read that builds on the personal experience of the contributors to create vivid illustrations of the region.

On the Australian side, traditional ways of life in the communities of the Torres Strait Islands are supplemented by the supports of the modern Australian state: employment and social security, healthcare and infrastructure.

Across the Strait in PNG’s South Fly region, villagers live in houses hewn from bush materials, lacking toilets and tanks for drinking water, with government services vanishingly non-existent, and poverty a crushing reality.

In those circumstances, who can blame people of the region for looking for opportunities further afield – which they are doing, legally and illegally.

The Torres Strait Treaty signed in 1978 and entering into force in 1985 governs the legal relationship. It was heralded at its signing as a forward-looking document, able to manage the needs for traditional cross-border connections to be maintained while providing international boundaries between Australia and newly independent PNG.

With limited opportunities for legitimate means of earning an income, the villagers of the South Fly are lured into illegal sources.

In practice it has become a complicating framework for the cross-border relationship, imposing bureaucratic interpretations on people-to-people connections that stretch across tens of thousands of years. Since the early 2000s, Australia’s increased focus on border security has meant some of those flexible Treaty provisions have hardened into strict rules that export privilege and generate resentment beyond Australia’s territory.

Take, for example, the role of so-called Treaty villages. Until the early 2000s, the movement of traditional residents across the Strait was relatively unpoliced. But an exchange of diplomatic notes in 2000 meant that 14 villages on the PNG side are now given recognition as Treaty Villages, with only their residents able to use the traditional border-crossing provisions in the Treaty. Those from other villages are excluded – and the resulting loss of access to Australian territory for traditional trade and visits is an ongoing source of resentment and feelings of injustice.

The Treaty does contain provisions for such agreements to be renegotiated. But in reality, PNG’s government has few resources and little capacity to prioritise such issues. Each year, formal meetings – involving officials, locals and diplomats – happen largely because Australia pays for them. It’s no surprise that the Australian priorities come to dominate the agenda.

Health is a constant challenge in the cross-border relationship. Australian fears about the spread of drug-resistant tuberculosis from PNG have spurred investment in some services on the PNG side through the aid program. But for those living in the South Fly, Australian clinics on Torres Strait islands remain closer and easier to access than unfunded and unserviced clinics on the PNG side.

Beyond the legal is the illicit. With limited opportunities for legitimate means of earning an income, the villagers of the South Fly are lured into illegal sources – primarily fishing, with in-demand delicacies like bêche-de-mer valuable in trade with middlemen from neighbouring Indonesia. But the illicit nature of the trade means prices paid are below market, which means people catch more than they otherwise would, which in turn drives overfishing. It’s a case of economic necessity leading to environmental degradation.

To some extent, the shared nature of the cross-border challenges are recognised. Through its aid program, Australia already provides the bulk of financial resources for the main regional hospital on Daru Island. It has funded ranger programs which provide jobs in the privileged Treaty villages on the PNG mainland. Australia’s fisheries management provides support for regulators on the PNG side. But too often the approaches are reactive and narrowly focused, dealing with particular Australian concerns about health, security and resources, with limited reference to PNG priorities.

Curth-Bibb and Moran, with their contributors, argue for new thinking from Australia. They say the complexities of the border region demand to be seen as shared challenges, with a cross-border approach involving all of those with a stake.

At the centre of those challenges is the one that underpins them all: the searing poverty of the people of PNG’s southern Fly region. Economic improvement will lift social, health and security outcomes, but the current border management approach means there are few opportunities on offer.

Sadly, as the global coronavirus pandemic overshadows Australia’s foreign policy and development assistance, and PNG’s national financial, economic and political challenges remain centre stage, the challenges of the border region look likely to remain at the fringes of political thinking.

Show Comments
Previous Article
Suga steps in, at least for now
Next Article
India puts relations with Japan back on the rails