Australia must be ready for China’s next move in the volatile game of statecraft brinkmanship. Australia’s 2020 Defence Strategic Update was, by the standards of such publications, a hard-hitting document. It had a particularly strong focus on grey zone activities, seen as increasingly troubling the Indo-Pacific and involving “military and non-military forms of assertiveness and coercion aimed at achieving strategic goals without provoking conflict”. Worryingly, the Update declared “grey zone activities directly or indirectly targeting Australian interests are occurring now”. The document directed Defence to be better prepared to respond to these activities today and into the future.

The Update’s intent is high-level and deliberately does not discuss grey zones in detail. However, in a new research paper for the Air and Space Power Centre, I do just that, focusing on the largest country undertaking grey zone actions: China. Whether in the South China Sea, the East China Sea or on its border with India, China has employed innovative and imaginative grey zone tactics in its quest for a persistent strategic advantage over others.

In general, grey zone activities involve purposefully pursuing political objectives through carefully designed operations; moving cautiously towards goals rather than seeking decisive results quickly; acting to remain below key escalatory thresholds so as to avoid war; and using all instruments of national power, particularly non-military and non-kinetic tools, such as cyber warfare.

Japan’s worry is that if Chinese air activities go unchallenged, other countries may gradually come to accept China’s claims over Japan’s.

Grey zone actions don’t just happen. China, for example, has implemented a well orchestrated campaign approved and controlled by the highest levels of the Chinese Communist Party (CCP) and the People’s Liberation Army (PLA). Grey zone actions are not those of tactical commanders freelancing. They are purposefully constructed to side-step military escalation – crafted as a form of carefully scripted brinkmanship.

Given its long duration, the United Nations maritime entitlements case in the South China Sea has become the poster child of Chinese grey zone activities. In 2013, Rear Admiral Zhang Zhaozhong explained how China, in a meticulously timed sequence, first sends fishing ships into disputed territory, then fisheries patrol vessels, then Coast Guard ships and finally PLA Navy warships. This is the so-called ”cabbage strategy”, where islands are surrounded layer by layer so that other nations’ ships are progressively prevented from gaining access. Today, this strategy includes extra players: the armed maritime militia, military aircraft, government survey vessels and oil rig platforms, all operating in conjunction with social media campaigns, radio misdirection, cyber warfare and GPS interference. The strategy can also be scaled up to suit circumstances: the Whitsun Reef incident in March 2021 involved more than 200 Chinese fishing vessels.

Further north, the East China Sea grey zone is subject to China’s extensive use of military aircraft. Here, the PLA Air Force is trying to wear down the Japanese Air Self-Defense Force by sending several hundred aircraft annually into airspace claimed by Japan. China is succeeding. Japan has decided to cut back on intercepting intruding Chinese aircraft and only deal with the most provocative formations, even if this may create a vacuum that China will fill. Japan’s worry is that if Chinese air activities go unchallenged, other countries may gradually come to accept – or at least acquiesce to – China’s claims over Japan’s.

China has also ramped up its grey zone activities along the so-called Line of Actual Control separating India and China. In May 2020 around the eastern Ladakh border, the PLA began pushing forward into areas under Indian control and blocking Indian border patrols. This followed the customary Chinese tactic of salami slicing, where no individual provocation is large enough to force the other side to respond militarily.

Ominously though, the dispute escalated, with the PLA attacking Indian troops and killing 20. This level of violence marks a new phase in Chinese grey zone activity that may be replicated elsewhere in the future. It also highlights the dynamic nature of China’s grey zone tactics.

There are, though, ways to peer into this uncertain future.

China’s grey zone characteristics reveal two principal variables: whether violent or non-violent actions are undertaken; and whether non-military or military instruments are used. This creates four alternative scenarios for how China’s grey zone activities may develop in the near-medium term.

The CCP has long used grey zone operations. How these evolve is up to the Party’s leadership.

Second, a “whatever it takes China” is a deterioration from the current status quo ante. This would see an angry China engaging in Wolf Warrior diplomacy; employing aggressive Coast Guard actions; seizing solitary fishing vessels; using crowds to besiege embassies; using targeted economic sanctions against individual nations, and much more.

Third, a “pushing the envelope China” is an evolved future where China uses the PLA more, but in a non-violent way. This would be a bellicose China with PLA leaders issuing harsh rhetorical statements; flooding disputed areas with massed military forces; declaring air defence identification zones (ADIZs) but without enforcement; using GPS jamming; publicising the placement of cyber malware into foreign infrastructure; and using economic sanctions against multiple nations simultaneously.

Finally, a “do as you are told China” is a worst-case future at the limits of grey zone activities and with a high risk of armed conflict. This would be a belligerent China with CCP leaders making threats; sizeable PLA forces being deployed; ADIZ enforcement; occasional activation of cyber malware in foreign infrastructure; and widespread economic sanctions.

The CCP has long used grey zone operations. How these evolve is up to the Party’s leadership. However, monitoring trendlines and understanding the possibilities could provide an early indication of the Party’s next move. Suitable responses can then be considered in a measured manner, without time pressures induced by a sudden, unexpected crisis. The future may not necessarily be hostile, however the killing of Indian soldiers on China’s border in June last year is worrying. The advice in Australia’s Defence Strategic Update to increase military preparedness may prove a timely shift. 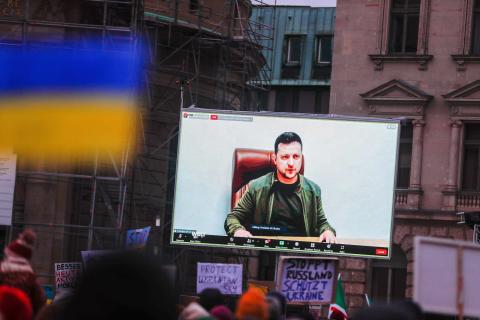 Previous Article
The politics of PacMan
Next Article
US-China rivalries: What matters for ASEAN

A coral reef in the middle of the Indian Ocean, owned by no-one, is fast becoming a focus of international controversy.
Mark Harrison 13 Jul 2017 17:33

Vital information is lost when the Philippines military is encouraged to kill rather than arrest the perpetrators.