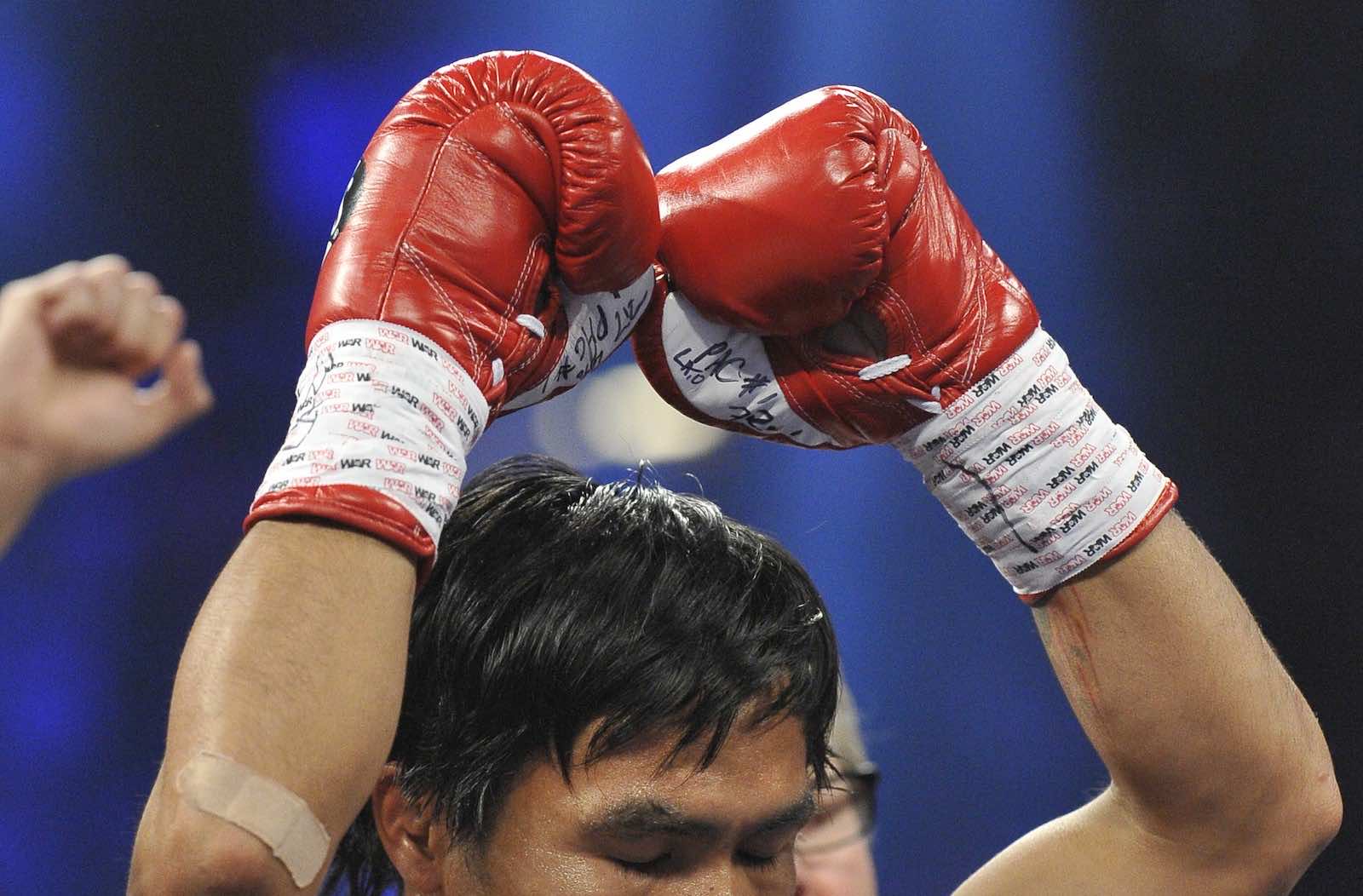 Boxer and Philippine senator Manny Pacquiao knows how to pick his fights. For weeks, the champ has engaged President Rodrigo Duterte in a word war.

First, Pacquiao jabbed Duterte’s leniency on the incursion of Chinese ships in the West Philippine Sea ­– a major thorn in the President’s side. More recently, Pacquiao hit out at the administration’s governance, claiming corruption is three times worse under the current regime. While the senator has yet to release any official data to back up these allegations, the entire Philippines senate had previously recommended that charges be filed against Health Secretary Francisco Duque for his alleged mismanagement of the government’s Covid-19 pandemic response and involvement in a health insurance scandal last year. Throughout Duque’s debacles, Duterte stood by his man and attacked Pacquiao for his statements.

Duterte called Pacquiao “a shit”, mocking his age and “failing” boxing skills as the senator prepares to face Errol Spence in the ring next August.

Most of the world knows Pacquiao for his boxing prowess. He is one of the greatest professional fighters of modern time, winning 62 fights, 39 by knockout and losing just seven bouts. Filipinos have become more acquainted with his stay in the legislature as his fights have become fewer between his congressional duties, which have become more demanding since he first won a seat. Pacquiao first ran for congress and lost in 2007, then scored landslide victories in the 1st district of South Cotabato in 2010 and 2013, then bagged a place in the senate by 2016.

Throughout this time Pacquiao has variously allied himself with the camp of former President Gloria Arroyo, who is now a staunch Duterte ally. By the time he shot to the senate, he had pledged himself to PDP-Laban Duterte’s political party. Pacquiao has distanced himself from the Liberal Party during his political tenure and now finds himself as provocateur of tensions within his allegiances.

Pacquiao shot to the top of PDP-Laban in December 2020 when he assumed presidency of the party. Since then, frictions between PDP-Laban factions have been heating up alongside the tirades between Pacquiao and Duterte. On 10 July, Pacquiao expelled three leading members of PDP-Laban for supposedly violating the organisation’s constitution. The trio had previously expressed willingness to support the presidential bid of Sara Duterte, the President’s daughter should she make a formal announcement.

On 17 July, Duterte criticised Pacquiao’s party leadership, likening it to a coup of sorts. The next day, Duterte’s Energy Secretary and PDP-Laban Vice-President Alfonso Cusi led another coup of sorts in a party assembly, declaring a vacancy of all national positions, effectively ousting the senator. In the same assembly, Cusi was elected as the new party leader. Cusi has also been vocal in supporting Sara Duterte’s political ambitions.

While no official presidential bids have yet been declared for the 2022 elections, some of the big names expected to join the race have already been heavily hinting. Sara Duterte has showered major cities in the country with an endless supply of posters and banners pushing for her candidacy. Her father has mused that he will probably run as vice-president, which would be an unhealthy echo of a long stay in the executive akin to Ferdinand Marcos’ dictatorship.

And amid all this, Pacquiao, a rookie senator albeit also a national figure, is suddenly making the boldest pronouncements of his political career.

The growing anti-Duterte sentiment and mass movement continues to influence and turn the heads of traditional politicians. In turn, protests are drawing bigger crowds, political personalities are delivering stronger statements of condemnation against the faults of the Duterte government. Progressives and liberals are teaming up against a common enemy. This has inevitably raised speculation about whether Pacquiao senses an opportunity to jump ship and steer his own course.

If Pacquiao’s motive for challenging the president is primarily grounded in his ambitions, does it negate his actions?

But what are Pacquiao’s politics? Is his sudden feud with the authoritarian president a genuine push for administrative change, or is it political theatrics intended to boost an imminent quest for the seat of power?

Pacquiao is a conservative and an evangelical Christian, both of which have guided his policy and decision making. Throughout most of his term, the senator’s actions have aligned with the wishes of the president. He helped persecute senator and Duterte critic Leila de Lima. He defended Paolo Duterte, the President’s son, from allegations of illegal drug trafficking. He supports the return of the death penalty, a Duterte campaign promise. He also labelled homosexuals “worse than animals”, only to later apologise saying he was against same-sex marriage.

While Pacquiao does come from an impoverished background and has displayed his philanthropic nature more than once, the only notable action he has undertaken for marginalised groups in the country has been to lend his support to labour groups’ call for national wage increases.

Then what’s behind this recent palpable shift in the tone of the boxing champ? Despite what many government surveys say, disapproval over the Presidents grows. Just about every action taken by Duterte recently – from the botched pandemic response to his subservient relationship to China – has resulted in a backlash. This in turn means that the opposition is growing and becoming more hopeful in looking at the upcoming elections for a chance to uproot Duterte’s domination in the branches of government.

In the Philippines’ post-Marcos history, electoral candidates endorsed by the sitting president almost never win. And when the president expresses such confidence that he will remain in the executive and continue to create policies, as Duterte has done, it provokes more indignant responses. The clamour against Duterte is so great that even conservatives and icons such as Pacquiao must change their tune. Speaking truth to power will make for attractive politics as the polls draw closer.

If Pacquiao’s motive for challenging the president is primarily grounded in his ambitions, does it negate his actions? Duterte is detested and opposition forces have become even more diverse. Pacquiao may be opportunistically riding on a wave of dissent that stems from Duterte’s unrelenting assault on the country, but he is right to do so.

It would be wise for political opponents of the president to back Pacquiao when he blasts Duterte, as his criticisms can broaden the platform upon which otherwise stifled voices will resonate. Pacquiao has an opportunity to echo widely felt sentiments, if not his traditional beliefs, by going against a President who has coddled fraud, violence and hypocrisy. At the same time, it would also be wise to exercise some vigilance while cheering on the boxing icon.