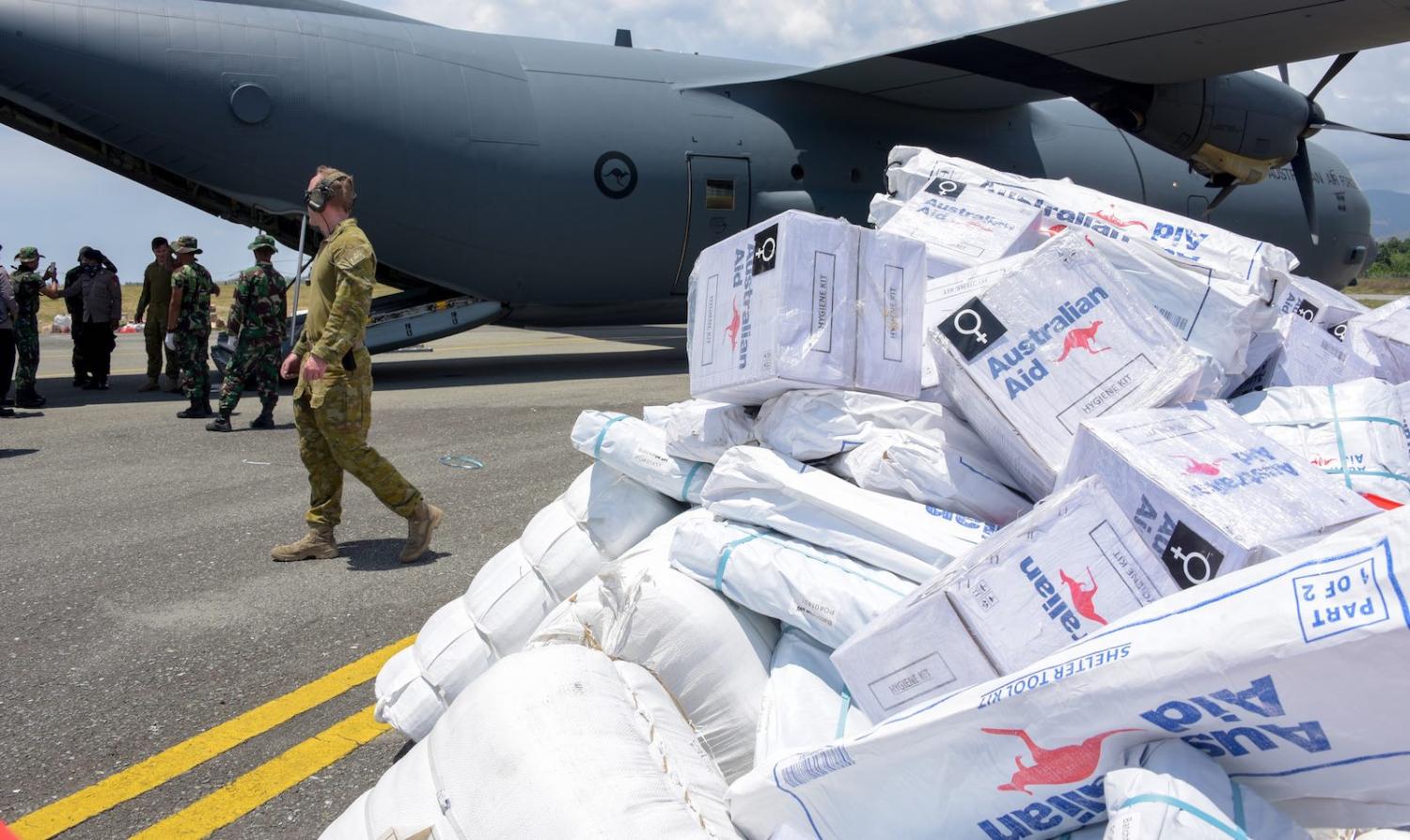 The cuts in this budget show that it is very difficult if not impossible to do more with less (Photo: Australian Embassy Jakarta)
Published 4 Apr 2019     Follow @jonathan_pryke

There were few surprises for the Australian aid program in this week’s federal budget, which has disappointingly continued the downward trend of Australian aid spending. At $4.044 billion in 2019, when adjusting for inflation, aid will have now been cut by 27% since its peak in 2013–14. Considering deficits were the justification for cutting our “charity” abroad, the continuing decline of Australian aid in a surplus year adds extra salt to the wound.

As these cuts continue, so too does Australia’s decline in international standings. When measured as a proportion of Gross National Income (similar to GDP), the international measure of showing a country’s generosity, next year’s budget will see Australia at 0.21%, well below the average for the countries of the Organisation for Economic Cooperation and Development, and not to mention the UN commitment of 0.7%. On current trends, by 2020-21 Australia will be in the bottom third of the 32 OECD donors. Meanwhile total global aid flows continue to grow.

Despite a stagnant budget, the Coalition has made some big commitments to the Pacific that they have needed to find funding for from elsewhere. That elsewhere is East and Southeast Asia. Cambodia, Bangladesh, India, Nepal, and Pakistan have all been cut, in some cases dramatically. Pakistan has been hit worst of all, with the bilateral program being more than halved from $39.4 million to $19 million. I don’t envy the High Commission in Pakistan’s job conveying that message to counterparts this week.

These new Pacific initiatives, centred around the new Australian Infrastructure Financing Facility (critiqued well by Stephen Howes and Matthew Dornan here) will push the total Pacific commitment up to $1.4 billion, or 35% of Australia’s total aid program. That’s the highest it has been since 1990, when PNG alone made up 27% of the aid program (it now makes up 15%).

It’s a shame that Australia’s step up in the region, which is welcome, is coming at the cost of stepping back elsewhere.

It’s a shame that Australia’s step up in the region, which is welcome, is coming at the cost of stepping back elsewhere. These new initiatives could be better justified if coming from new money. Since they’re not, and have come at the cost of by-and-large well performing (by the Department of Foreign Affairs and Trade’s own standards) parts of the aid program, these initiatives warrant even greater scrutiny.

This budget, and the four before it since the cuts began, show that it is very difficult if not impossible to do more with less. There is always going to be a loser as aid investments are re-prioritised with no budgetary relief.

The Coalition has included one morsel of hope – the government has finally committed to indexing the budget against inflation at the end of the forward estimates period in 2022–23. Nine years after peaking at 0.32%, Australia’s aid program will at that stage be sitting at 0.19%.

As humanitarian and development challenges in the near and immediate region only continue to grow, combined with the growing recognition that aid is an important investment in Australia’s security and national interest, that simply isn’t good enough.

It will take concerted effort, and at least a decade, to dig Australia out of the hole it has found itself in. Entering an election campaign, there are some alternative trajectories on the table. The Australian Labor Party has commendably committed to increasing the aid program by some amount above its Gross National Income ratio (in other words increasing the aid program by GNI growth and adding, at a minimum, a dollar to that amount). The Greens have ambitiously committed to increasing the aid program to 0.7% by 2030. A more sensible, yet still ambitious, target that I would hope you could build bipartisan support around would be to increase Australian aid by a basis point (0.01%) each year until it gets back to at least the OECD average.

Assuming these policies were to take effect in next year’s (2020-21) budget, this is how things could look over the next decade.

As this table illustrates, even increasing the aid program by inflation under the Coalition’s plans won’t be enough to stop Australia sliding backwards. A Labor minimum would keep the aid budget treading water at 0.21%, but still increase the overall program by almost 43%. The alternative I would advocate for, a 0.01% per year increase, would more than double the aid program but even after 16 years still not get Australia back to its 2012–13 peak. The Greens proposal would almost quadruple the aid program.

These targets are ambitious. Adding $400 million a year to the aid program would just about put it at its absorptive capacity. This is also to say nothing of the lingering issues of governance and management of aid within DFAT (highlighted recently by Richard Moore, Reset required for DFAT-AusAID integration).

The targets also illustrate that bipartisan leadership on aid is essential just to get Australia back to where it was, let alone to a point where it can legitimately claim, as Australians often love to do, to “punch above our weight”.

A new Lowy Institute survey reveals a wide range of experiences and views around the Australia-China relationship.
Hugh Piper 19 Jul 2022 05:00

Julie Bishop’s call for a US strengthening of the liberal order indicates a worrying staleness about policy thinking in Canberra.