Australia must bolster its vaccine assistance with practical fixes, starting with energy and cold-storage solutions. 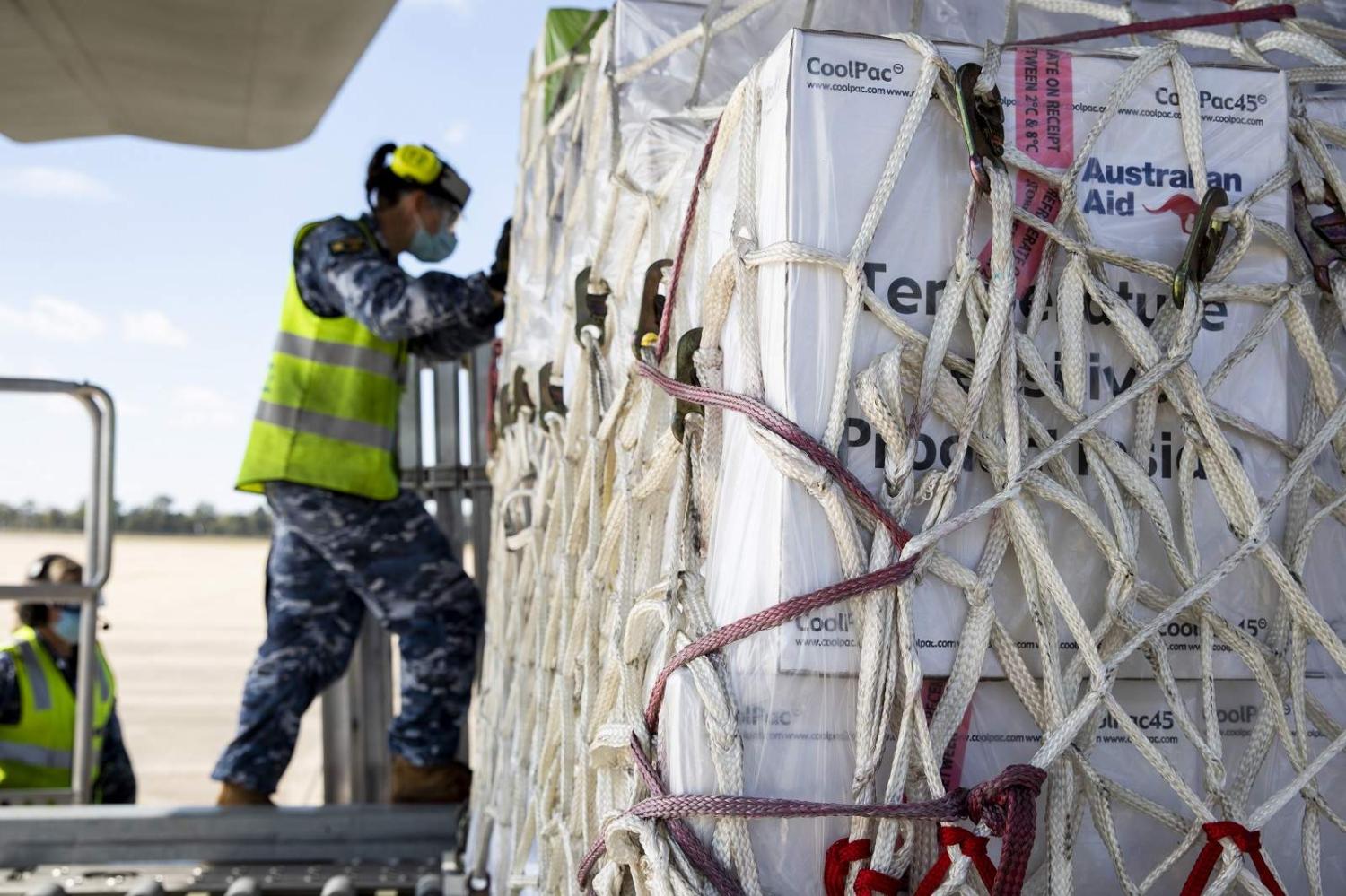 Air Movements Operators from No 23 Squadron load pallets of AstraZeneca vaccines and Covid-19 medical supplies bound for Fiji onto a C-130J Hercules at RAAF Base Amberley (defence.gov.au)
Published 7 Oct 2021

Through thickly vegetated jungle paths, teams of doctors hike for hours to reach Fiji’s most remote villages. Travelling ahead of them, as reported in The Guardian recently, are packhorses carrying ice-chests filled with AstraZeneca vaccines.

Fiji is no backwater. It is the second most populous Pacific nation and, thanks to a pre-pandemic tourism boom, more prosperous than its neighbours.

But even with its advantages, Fiji is mobilising actual horsepower to overcome unavoidable obstacles to its Covid-19 vaccine rollout.

Rugged terrain, dispersed populations and patchy supplies of energy to regional communities – essential for the cold storage of vaccines – serve as major impediments to Fiji’s efforts. Fortunately, the nation is progressing: 96 per cent of the “eligible population” have received their first jab. Tentative plans have been drawn up to open borders as early as November.

In announcing the Step-Up, Australia aspired to be the Pacific partner of choice – to stand out from a competitive field of suitors vying for influence in the region.

In PNG, less than one per cent of the population has been fully vaccinated, six months since doses first arrived. In Vanuatu and Solomon Islands, around five per cent are double dosed.

Solomon Islands’ Prime Minister Manasseh Sogavare recently pledged to reopen his country’s tightly controlled borders once 80 per cent of the population is double-dosed. This aligns with epidemiological advice, but grates against the reality of his country’s current vaccine distribution capabilities.

Under this status quo, Sogavare, like his counterparts in PNG and Vanuatu, may soon face a stark choice: open to the dangerous spread or keep entry tightly restricted for, perhaps, several more years. Both options will further decimate fragile economies, and risk winding back years of socio-economic progress – much of it supported by Australian taxpayers.

It is within this new paradigm that Australia’s Pacific Step-Up – Scott Morrison’s multibillion dollar, signature foreign policy initiative – is struggling to find its feet.

The Step-Up has produced real benefits: it has reprioritised the Pacific in Australian foreign policy and expanded Australia’s Pacific footprint.

It also offers more cash. The central pillar of the Step-Up is a $2 billion infrastructure fund – the Australian Infrastructure Financing Facility for the Pacific (AIFFP). The fund has financed a few projects, but not reformed the top-down nature of Pacific development and financing, which has improved services in urban areas, but seen development outcomes in rural communities – where 80 per cent of Melanesians live – largely stagnate. The AIFFP is useful, but no game-changer.

In announcing the Step-Up, Australia aspired to be the Pacific partner of choice – to stand out from a competitive field of suitors vying for influence in the region.

But to achieve this, it must urgently address the problems that have been exposed, and worsened, by the pandemic – realities that weren’t considered when the Step-Up was being designed.

Put simply, the initiative needs a shake-up. A bold effort to overcome village-level infrastructure deficits, especially in energy and in collaboration with Pacific communities themselves, should be its focus.

Certainly, the Morrison government has responded to the pandemic in the Pacific, making major commitments to vaccinate the region. Vaccines manufactured in Australia are saving Pacific lives. The importance of this can’t be ignored. But no matter how many vaccines Australia pledges, the infrastructure is not in place to distribute them to thousands of communities at the pace Covid demands.

Distributing vaccines in Pacific geographies requires herculean efforts. Trucks will have to navigate crumbling roads, while prop-planes will need to land on short grass landing strips – if the weather holds. Thousands of vaccines will have to be transported by foot, horseback or banana boats up the Fly River and across Iron Bottom Sound.

Australia could begin by working with PNG, Solomon Islands and Vanuatu to identify viable off-grid energy hubs in rural communities.

But it’s not just the transportation of vaccines that poses a challenge. Once they arrive, doses need to be injected immediately to avoid perishing in the tropical heat.

Only 13 per cent of PNG has a reliable electricity supply, and fewer than half of all health clinics in rural PNG even have a refrigerator. Electricity access is almost as poor in rural Solomon Islands and Vanuatu.

The profound degree of energy poverty in Melanesia has always been an economic blight. But in a pandemic world, it prohibits the activation of cold-chain networks needed to inoculate communities where Covid-19 is likely to become endemic.

Australia must dedicate itself to addressing this energy/vaccine nexus. If compassion for the Pacific alone doesn’t motivate, perhaps the reality of uncontained Covid-19 in PNG – and its potential to spread new coronavirus variants just kilometres from Australian soil – will inspire action.

This challenge is significant, but it can be addressed. Australia could begin by working with PNG, Solomon Islands and Vanuatu to identify viable off-grid energy hubs in rural communities. Churches, schools, clinics and small businesses could house reliable, remote solar energy supplies to power the refrigeration needed for activating cold-storage networks.

If Australia truly aspires to be the Pacific’s partner of choice, it must be ambitious enough to confront, collaboratively, the Pacific’s most debilitating challenges.

The 2018 Rim of the Pacific military exercises are a chance for China’s neighbours to signal support for the US.
Jenny Gordon 14 Sep 2022 15:09