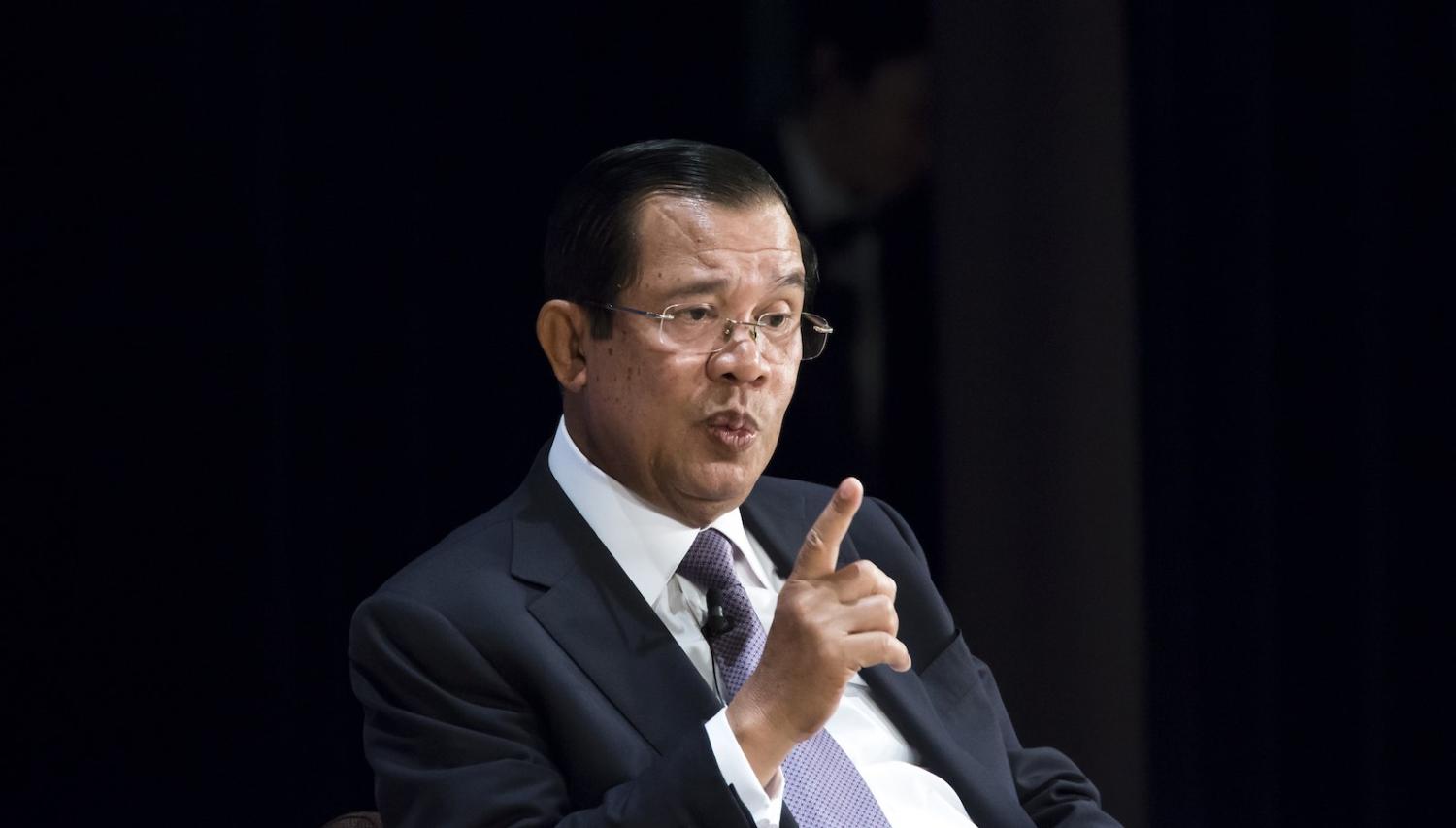 To the casual observer, it may appear that Cambodian strongman Hun Sen is letting up, undoing some recent repression. This month, Hun Sen released Kem Sokha, the founder and co-leader of the main opposition party, after more than two years of house arrest, days later also ordering the release of more than 70 opposition activists arrested for “plotting to overthrow the government”.

These moderate relaxations are a direct response to European Union pressure, despite ruling party rhetoric suggesting the opposite. Since February 2019, the EU, citing “a deterioration of democracy [and] respect for human rights”, has been moving towards revoking Cambodia’s membership in the Everything But Arms (EBA) trade scheme, which allows the duty-free export of certain goods – textiles, footwear, and agricultural products – to Europe. The bloc will issue its final decision in February 2020. Cambodia, if removed, will experience what one analysis described as “a decline that could send the sector into free-fall and impact on the livelihoods of millions of Cambodians.” Meanwhile, the US Senate is considering a bill that would revoke Cambodia’s membership in Washington’s own preferential trade scheme.

Elders generally credit Hun Sen with delivering Cambodia from the Khmer Rouge period, but young people do not feel as if they owe him anything, instead blaming him for the state of the economy, along with lagging development and corruption.

Hun Sen is a skilled maneuverer, doing just enough over the years to satisfy the West, which in turn helps prop up Cambodia’s economy, imbuing him with some much-needed legitimacy. He has a long history of making short-term concessions, only to roll them back soon after, rather than implement any real change. This is perhaps best evidenced by his cynical treatment of Sokha, who despite being “free” is still banned from politics, and set to be put on trial for treason.

Western efforts have yet to bring about the peaceful, inclusive, and democratic Cambodia promised by the 1991 Paris Peace Accords. The US and Europe have struggled to counter Hun Sen effectively, instead seeking his cooperation on issues of mutual concern, hoping to keep Cambodia at least vaguely in the Western sphere of influence. But now, with Cambodia a codified one-party state deeply in China’s pocket – and Hun Sen lashing out against the EU – the West needs a new future-focused strategy, one that holds the Cambodian government accountable for human rights violations and other breaches. As a first step, Brussels and Washington should revoke their respective preferential trade statuses for Cambodia.

The popular narrative remains that terminating Cambodia’s membership in the EBA – whose rules it has clearly violated – will further force Phnom Penh into Beijing’s arms. This thinking is outdated. It’s unclear how Cambodia could possibly draw itself closer to China without itself becoming the country’s 27th province: Beijing is Cambodia’s biggest investor; parts of Cambodia have effectively become Chinese colonies; Cambodia even appears ready to give China use of a naval base in the Gulf of Thailand.

Cambodia is a Chinese vassal state helmed by Hun Sen – a reality no Western soft power can soon change. He will instead likely remain in power until he dies. But his son and likely successor Hun Manet, for reasons both unique to Cambodia and standard to patrimonial successions, will face significant public and elite opposition – both of which appear to be growing – when he tries to take over. (It’s unclear how China would respond to Cambodian regime change or instability, but Beijing has already shown an unusual propensity to intervene in Cambodian politics.)

Public anger is rising over what is reported as “skyrocketing household debt, resentment at an influx of Chinese investment, and a lack of jobs”. Additionally, Cambodia’s youth – nearly two thirds* of Cambodians are under 30 years old – undermines Hun Sen and his progeny. Elders generally credit Hun Sen with delivering Cambodia from the Khmer Rouge period, but young people do not feel as if they owe him anything, instead blaming him for the state of the economy, along with lagging development and corruption.

Hun Sen’s grip on power, therefore, hinges largely on his ability to control volatile elites. But, according to Reuters, some elites have doubted Hun Sen since 2013, even pursuing Western escapes.

Upon his death, elite and public discontent could converge to prevent Manet’s succession. A powerful post-Sen protest mirroring its diverse anti-Sen 2013 analog could bring about the progress and change the West has long promised, and for which Cambodians have long yearned.

But people do not mechanically mobilise in response to grievances, of which Cambodians already have many, but only when they are “empowered by a sense of injustice”.

The EU and US, by revoking their respective trade preferences – while publicly tying the decision to Hun Sen’s stubbornness and subsequently offering targeted aid to fill the gaps left by his kleptocracy – can add to Cambodians’ list of anti-Sen grievances, further solidifying their sense of injustice, ultimately increasing the chances of a public uprising to coincide with elite instability upon Hun Sen’s death.

Indeed, the West can help bring about eventual change in Cambodia, but only by thinking in the long term, taking charge, and playing hardball with Hun Sen, rather than continuing to be played by Phnom Penh’s shrewd self-interested tactician.

* This figure has been updated.

Previous Article
Shock therapy: why Australia needs a political jolt
Next Article
In Sri Lanka, the Rajapaksas will rule ruthlessly

The political centre-right is seeking to redefine what “internationalism” means with an emphasis on sovereignty.
John Edwards 21 Apr 2020 09:00

Policies that injure global trade in medical products would hurt the US and Western democratic allies more than most.