Joko Widodo is sending mixed signals about whether he is truly combating religious radicalism. 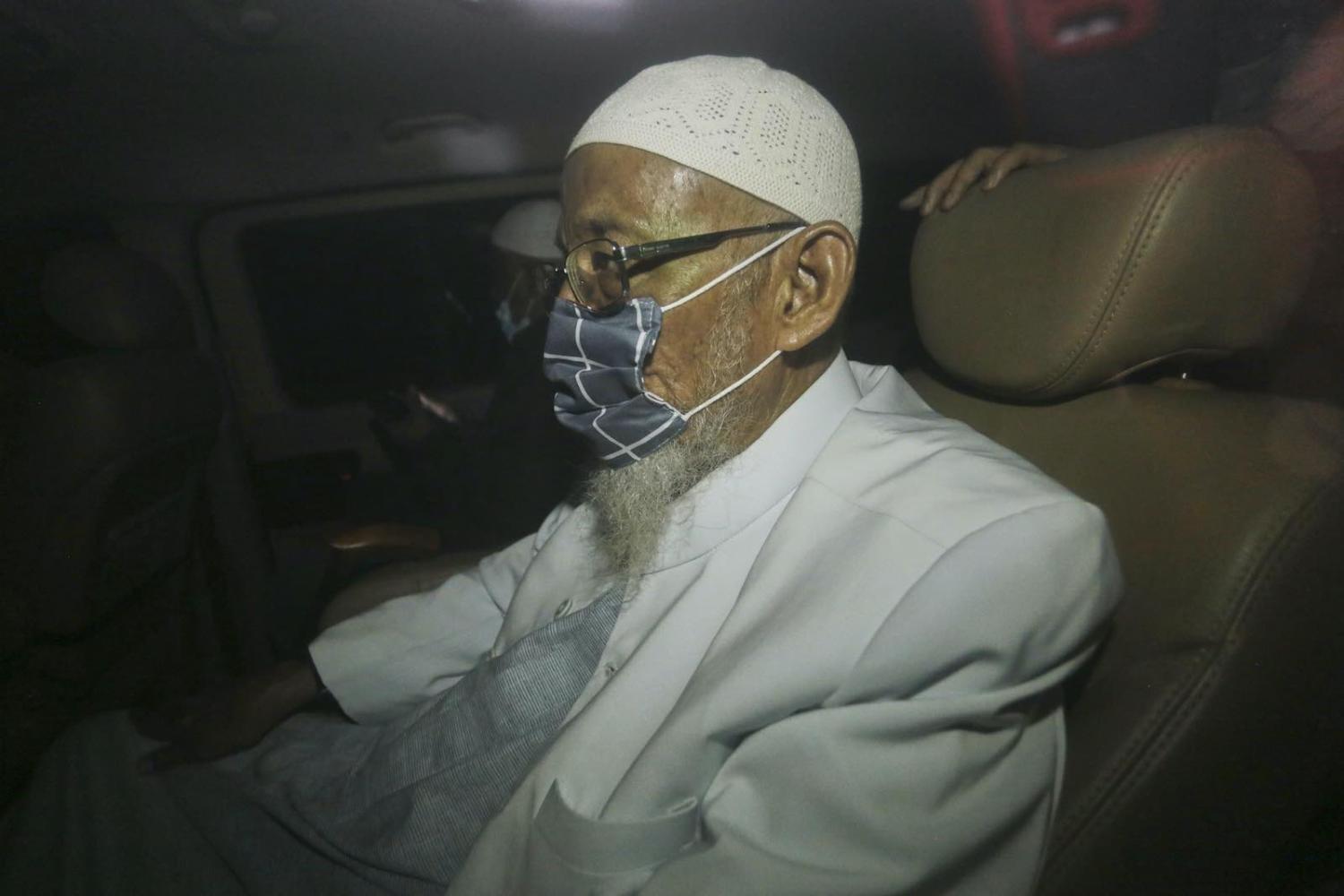 Abu Bakar Bashir is driven away from prison after his release on 8 January 2021 in Bogor, Indonesia (Photo by Getty Images)
Published 15 Jan 2021     Follow @Johannes_nos

When Indonesian authorities recently banned well-known extremist group the Islamic Defenders’ Front (FPI) – having first arrested its leader, Rizieq Shihab – many lauded the move as a bold pushback against radicalism. But, weeks later, the world was equally stunned to learn that Indonesia had granted Abu Bakar Bashir, a cleric convicted of involvement in the “evil conspiracy” leading to the 2002 Bali bombings, an early release from prison on “humanitarian” grounds.

While the government insisted that the octogenarian Bashir no longer posed any risk, the decision was definitely hurtful to the families of the Bali bombing victims, and baffling to the governments of the countries from which some of his victims came. Australian Prime Minister Scott Morrison, for example, called it “distressing” news.

The mixed signals call into question whether Indonesia under President Joko Widodo, better known as Jokowi, is truly ramping up its efforts to combat religious radicalism.

The ministerial decree containing the injunction against FPI – signed by six different government agencies ─ did not characterise the group as being radical. In fact, it carefully tiptoed around the issue. For instance, the document referred to FPI’s incursions into the lives of private citizens in order to enforce the Shariah law as vigilantism rather than transgression of (mostly) minority rights.

The Indonesian government may have portrayed its latest move against FPI and its leader as a triumph against radicalism. But the bare facts suggest otherwise.

Most importantly, the government based its ban on the fact that FPI’s license as a “mass organisation” had expired last year and was not renewed.

Legal experts have contested this argument, pointing out that the right of association is guaranteed by the constitution, and that it is not mandatory to register an organisation with the government. Those which choose to be licensed do so because they wish to be eligible for grants or tax relief. In fact, despite its controversial record, FPI had been receiving government subsidies until 2019.

The government also claimed that FPI in its charter did not recognise the state ideology Pancasila as its basic tenet and was by law illegal. While this is a cogent point within Indonesian jurisprudence, it raises the question how FPI managed to register itself and receive state benefits in the first place. Prior to this recognition by the state, FPI was a fringe Islamic group with no legal access to the government.

So why did the Indonesian government choose to act against FPI now when it could have revoked its license long ago based on the legal arguments spelled out in the ministerial decree?

The answer to this question seems to lie in the figure of FPI leader Rizieq Shihab, a firebrand cleric who first became a thorn in Jokowi’s side when he prominently led the 2016–17 series of massive public protests to pressure the government not to come to the aid of the then–Jakarta Governor Basuki Tjahja Purnama, a Christian who was charged with blasphemy against Islam.

In one demonstration in particular, on 4 November 2016, the protesters converged to surround the Presidential Palace. Although Jokowi was not in residence at the time, it was said that the incident rattled the president so badly that he immediately ordered Purnama’s blasphemy case to be expedited through the courts, landing the governor with a conviction. He also cancelled a visit to Australia scheduled to begin that night.

In 2017, the government staged a counterattack when Shihab became a suspect in a pornography investigation after his WhatsApp chat messages with a woman, Firza Hussein, were leaked on the internet. The legal sabre rattling forced Shihab to flee to Saudi Arabia, where he stayed until his return to the country in November 2020, allegedly to attend his daughter’s wedding.

Shihab came home to a hero’s welcome from his followers, who in their thousands flocked to the airport in a show of force. Interestingly, the authorities seemed to turn a blind eye to the obvious flouting of government health protocols during the Covid-19 pandemic on a massive scale.

The same thing happened when he hosted 10,000 guests for his daughter’s wedding reception. Later on, however, local officials and police officers deemed responsible for letting the event take place were punished, apparently at the president’s express order.

After his return from exile, Shihab also declared a movement which he called a “moral revolution”. He also hinted that FPI would side with the workers to campaign against the government’s new pro-investment Omnibus Law.

Tensions ran high as rumours of his imminent arrest began to circulate and Shihab started to travel with FPI bodyguards. A police chase on a highway ended in a shootout on 7 December, in which six of Shihab’s bodyguards were killed. A week later, the charismatic cleric was arrested and charged with breaching Covid-19 health protocols on at least two instances. During his detention, the government moved fast to ban FPI.

While the proscription against FPI had the appearance of a strike against Islamic radicalism, the real casualty may be Shihab’s political standing and influence. Detained in police custody, he was unable to rally his supporters to fight the ban. His dominance within FPI was as such that by delegitimising it, the government shoved Shihab back to the political fringes where he had started out.

In the meantime, he urged his supporters to declare a new organisation in lieu of the old FPI, which they did late last month. In retort, the government said it would not issue a license for the new FPI.

Throughout, the government took every care not to offend the sensibilities of Muslim conservatives. The president was kept out of the controversial move by way of a ministerial rather than presidential decree. It left enough room for a U-turn by Jokowi in case the ban elicited massive protests. To rub salve into the wound, while Shihab remains in detention, Bashir, another controversial but likely defanged cleric, has been reprieved.

The Indonesian government may have portrayed its latest move against FPI and its leader as a triumph against radicalism. But the bare facts suggest otherwise. It is worth remembering that, in both 2017 and 2020, Shihab was never prosecuted with hate crimes. Rather, he was charged with crimes unrelated to his political standing. Similarly, FPI was disbanded mainly on a technical issue instead of its well-known record of intolerance.

Always known as a fiercely non-aligned leader, Malaysia’s Prime Minister has changed his tune on the Belt and Road.
Khang Vu 11 Jul 2019 06:00

It is easy to mistake process for progress in talking to North Korea.
Robert Garran 1 Feb 2017 16:24

The key test of the Australia-US alliance under the presidency of Donald Trump will be his approach to Asia.