Habib Rizieq Shihab can wield a potent influence, but even those welcoming him home from exile are wary of being burned. 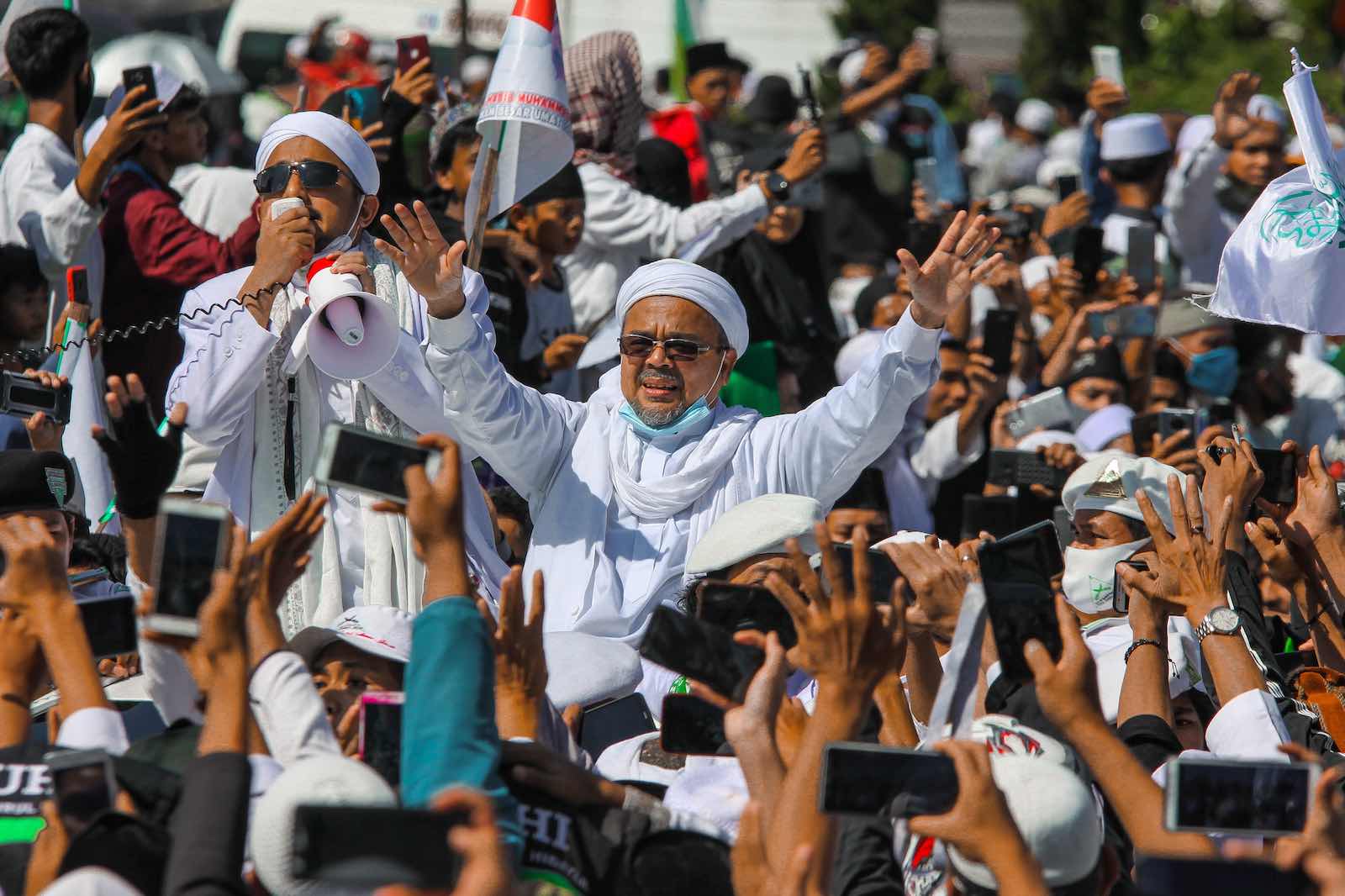 The recurring puzzle as to whether Indonesia’s most divisive Muslim cleric, Habib Rizieq Shihab, leader of vigilante group Islam Defenders Front (FPI), would return to the country was solved on Tuesday last week when he finally set foot at home from Saudi Arabia. The firebrand cleric went into self-exile in Saudi Arabia in April 2017, following two lawsuits against him. At least 51,000 of his followers welcomed him at the Soekarno-Hatta International airport in Jakarta, causing severe traffic jams and delaying other flights for up to three hours.

Rizieq’s return is timely, as Islamists are gearing up to compete in presidential and legislative elections to be held in 2024. Veteran Islamist politician Amien Rais left the centrist National Mandate Party (PAN), which he founded in 1998, to establish a new Islamist party called Partai Ummat (Islam Community Party). Figures who claimed to be the ideological children of Masyumi Party, a big Islamist political party in the 1950s and banned in 1960, this month resurrected the party from its long hiatus through a tagline: “Masyumi Reborn”.

Rizieq was known as somebody who led a small band of radicals, who frequently raided restaurants and bars serving alcoholic drinks during the holy month of Ramadhan. His stature rose sharply among poor urban Muslims after he spearheaded a large sectarian movement against Basuki Tjahaja Purnama (known as Ahok), then-governor of Jakarta, for blasphemy charges between 2016 and early 2017. The movement was eventually supported by various streams of Muslims, and Ahok, a Chinese-Indonesian and a Christian, was subsequently imprisoned for one year and eight months.

Rizieq fled Indonesia in April 2017, after accusations were raised against him for texting pornographic images with a woman and defaming state symbols. He has spent the time since in self-imposed exile in Saudi Arabia and influenced Indonesian politics through video conferences.

Some emerging political groups have invited Rizieq to establish political partnerships to broaden their constituencies. Other Islamist politicians, including from the more established political parties, only cautiously welcome Rizieq.

Rizieq has returned to Indonesia amid a weakening of Islamist politics. The Islamists became demoralised after their political patron, Prabowo Subianto, left the alliance to join the Joko Widodo administration as the Minister of Defence. Islamists have been laying low as they continue to be scrutinised for being critical of the government.

The return of Rizieq amounts to an effort to energise Islamist politics from this ill fortune. Executives at the Indonesian Council of Ulema (MUI), a quasi-state institution known for its conservative stance, believe that Rizieq, with his penchant for combative and sharp critiques of Joko Widodo, will be a potent political weapon for Islamists to challenge the current regime. An MUI executive, Anwar Abbas, argued that Rizieq is a phenomenal figure, with large numbers of loyal followers, with an unrivalled skill in delivering political jabs against the establishment in the country.

Some emerging political groups have invited Rizieq to establish political partnerships to broaden their constituencies in preparation for the 2024 elections. The Save Indonesia Coalition (KAMI), a sizable mass organisation made up of numerous prominent government critics including Islamists, claimed that they are ready to work together with Rizieq “to defend justice, truth and to fight oppression”. The Masyumi Party also asked Rizieq to join them, given their common political and ideological aspirations. The warm welcome shows that Islamists are hopeful with his return.

Yet other Islamist politicians, including from the more established political parties, such as the Prosperous Justice Party (PKS), only cautiously welcome Rizieq. These politicians understand that his influence has grown following Ahok’s blasphemy incident in 2017. While they seem favourable towards his return, the Islamist politicians remain at a distance with the firebrand cleric.

An executive of the Ummat Party stated that his party decided to launch the party’s logo in lieu of Rizieq’s arrival in Indonesia as it symbolises “the cleric’s struggle in fighting oppressive powers and establishing justice”. In a similar tone, the PKS president Ahmad Syaikhu urged the government to not criminalise Rizieq. These statements reflect a positive attitude from Islamist politicians towards Rizieq’s return. However, none of them has made concrete offers for political alliances with the cleric in order to achieve their common political objectives.

These Islamist politicians understand that there are risks in building formal political alliances with Rizieq or merging their organisations with Rizieq’s organization (FPI). Rizieq’s combative, divisive and uncompromising style could be a liability for them. While such tactics might be appeal to poor and uneducated urban Muslims, it will not impress broader constituencies, who are more comfortable with a more moderate tone of politics.

By associating with established Islamist parties, Rizieq might help to expand their political base, but his presence could inadvertently alienate existing constituencies.