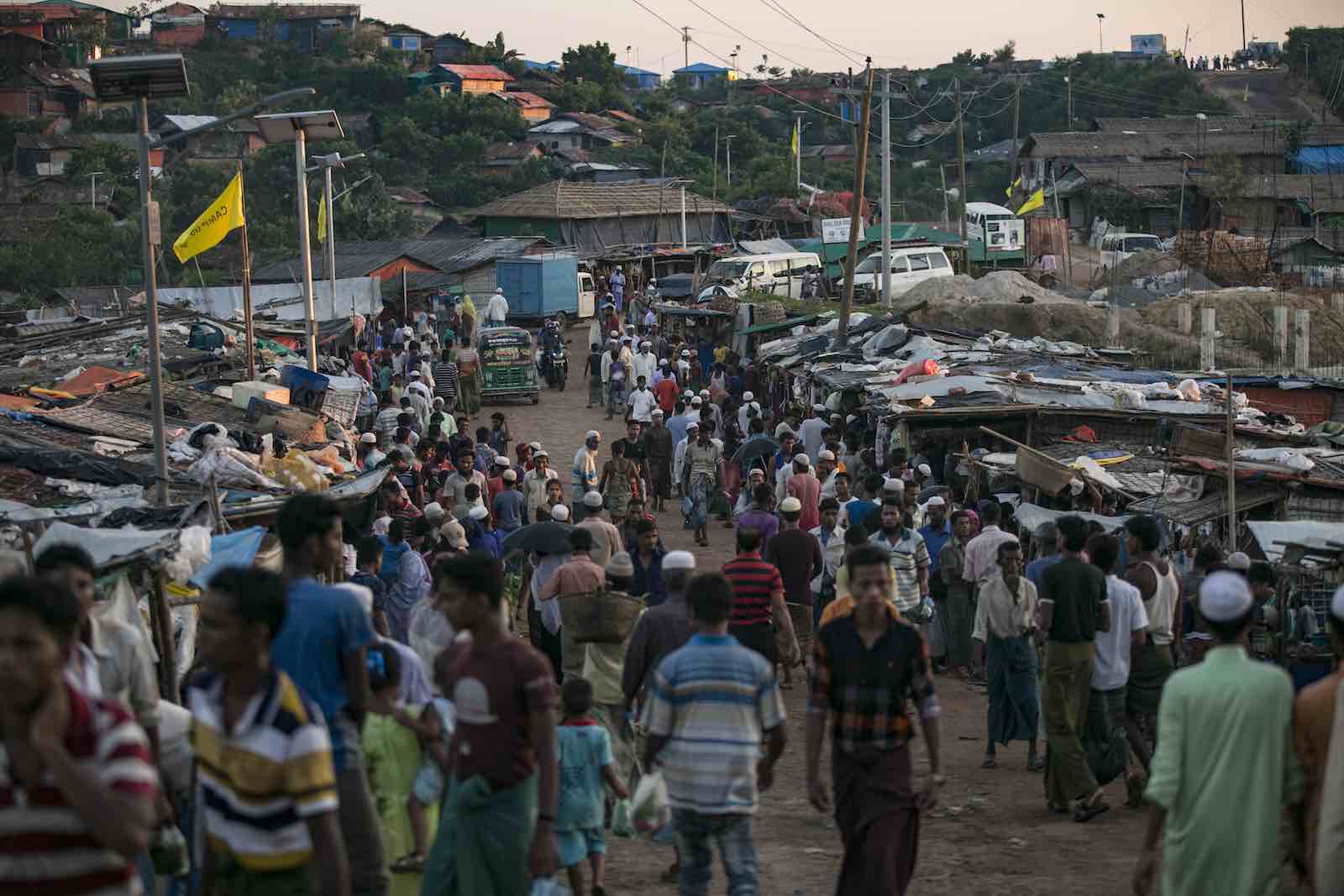 The first case of Covid-19 was detected near the world’s largest refugee camp last month. Human rights groups fear it’s only matter of time before it spreads among the roughly one million Rohingya refugees living in Cox’s Bazar, Bangladesh.

Having fled ethnic cleansing at the hands of the Myanmar military, these people exist in extraordinarily cramped, fetid conditions without access to clean water or safe sanitation. Risks to physical health and safety abound: flooding, malnutrition, gender-based violence, even rampaging elephants. According to the Red Cross, the camps have a population density of more than 60,000 people per square kilometre – one and a half times the world’s most densely populated city, Manila.

Meeting recommended social distancing and self-quarantine practices to prevent the spread of coronavirus in these conditions is clearly impossible. Moreover, in a place where a vast majority of the population is almost entirely reliant on external aid for basics such as food, Covid-19 poses even greater challenges to daily life. Aid worker access has been limited to avoid spread of the disease.

There are always ways that refugees and asylum seekers can be active contributors, not just passive victims. The coronavirus pandemic is no exception.

“The humanitarian agencies in Cox’s Bazar have already stripped back to essential-only services like healthcare and food distribution,” Athena Rayburn, a spokesperson for Save the Children wrote.  A cohort of rights groups have also written to Bangladesh’s prime minister, calling for a halt to the construction of barbed wire fences around the camps and life restrictions on mobile internet – both which further reduce the availability of services and information to refugees about coronavirus prevention. Paul Spiegel from the John Hopkins Center for Humanitarian Health has called the camps a “perfect storm” for spread of the disease.

This is just but one refugee population. The UN refugee agency, UNHCR, counts 26 million refugees worldwide under its mandate. Large, vulnerable populations live in camps along the Thai-Myanmar border, in the urban slums of Malaysia, and as an underclass in Iran, where coronavirus has already caused thousands of deaths. Pakistan, Turkey, Uganda, and other countries host refugee populations of more than a million people. UNHCR has now suspended its refugee resettlement program indefinitely due to the virus, prolonging people’s waits in limbo indefinitely.

Transparency and public messaging have shown to be crucial in fighting the disease. Governments should ensure that resident populations of people seeking asylum have access to information in their own languages, to prevent spread among refugees themselves and to the wider community. In Indonesia, for example, nimble refugee-led organisations have been active in distributing Covid-19 prevention advice in languages such as Farsi, French, and Arabic. From Australia, the broadcaster SBS is providing up-to-date information on Covid-19 in 63 languages from Rohingya to Tibetan.

Nevertheless, the living conditions of many refugees around the world, whether in camps, urban settings, or detention centres, continues to make social distancing impossible. This poses the greatest threat to not only refugees themselves, but the community at large. Advocates and medical professionals say that releasing people from immigration detention and lifting the living standards of those in the community can help curb the spread of the disease.

For several years, aid groups and development experts have increasingly demonstrated the benefits of direct cash handouts to marginalised populations. One study from Kenya has shown that unconditional cash transfers can reduce poverty, boost school attendance, and – importantly – improve public health. A UNHCR cash transfer program for Syrian refugees in Jordan demonstrated that a majority of the beneficiaries used the money to pay rent, and as non-citizens, cover their out-of-pocket health expenses. Boosting contributions to the desperately underfunded UN refugee agency is an easy way for governments to contribute to Covid-19 prevention measures for refugees.

There are always ways that refugees and asylum seekers can be active contributors, not just passive victims. The coronavirus pandemic is no exception. Governments can loosen politically motivated restrictions on employment rights for asylum seekers, which economists and rights advocates alike have argued are unnecessarily cruel and expensive. This would allow them to leverage additional medical expertise. The Irish Medical Council, for example, has recommended that refugees and asylum seekers with medical training could be mobilised to provide “essential support” by taking up roles as healthcare assistants and helping in the fight against Covid-19.

As wealthy countries such as Australia look to protect their own citizens, they would do well to also remember the most vulnerable people, languishing in limbo within their own borders, in transit countries such as Malaysia and Indonesia, and indeed in countries of origin like Afghanistan or Iran. As Pierre-Alain Fridez, chair of the Parliamentary Assembly of the Council of Europe’s migration body said last week:

Our countries will overcome the Covid-19 crisis. In order to survive, we must remain humane and supportive, and so we must not forget the weakest in our society.

Show Comments
Previous Article
US regional leadership: A shot across the bow
Next Article
Japan and coronavirus: Abe needs to make bold decisions